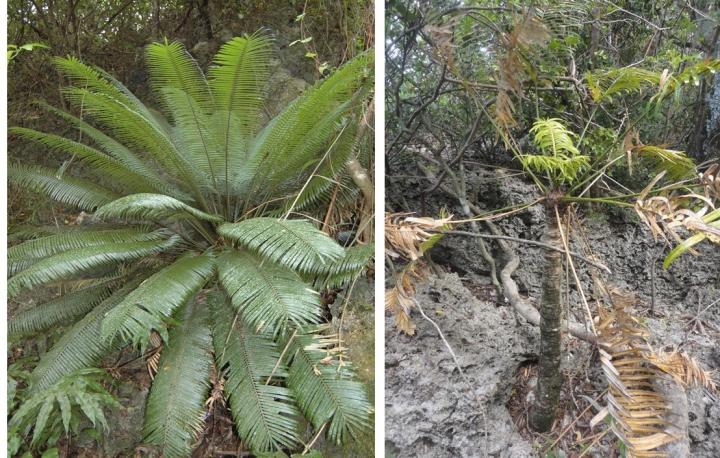 When humans bring a non-native herbivore to an isolated island, the native trees do not possess traits to craft an operative defense to the new threat, and the results can be devastating. A long-term study on cycads in Guam has revealed how rapidly invasive species devastated the native Cycas micronesica species and the key factors that have influenced the plant’s mortality. The research — conducted by the Western Pacific Tropical Research Center at the University of Guam and the College of Micronesia-FSM — is published in the May 2020 issue of Diversity, a peer-reviewed journal published by MDPI.

“Guam’s Cycas micronesica was the most abundant tree on Guam two decades ago, but then an onslaught of non-native insect herbivores invaded the island and initiated sweeping mortality,” said Adrian Ares, associate director of the Western Pacific Tropical Research Center, where the research was conducted.

The researchers established 120 permanent plots throughout Guam in 2005 during the time period that the armored scale Aulacaspis yasumatsui was spreading across the island from the initial 2003 infestation site. This tiny insect was among the first to invade Guam and remains the most devastating cycad pest that has altered the island’s natural and urban forests. As the plots were being positioned to provide the pre-invasion plant data, a second invasion occurred — the specialist butterfly Chilades pandava. The larvae of this butterfly consume vast quantities of young tender cycad leaf tissue.

The results of the researchers’ island-wide compilation of plant mortality over 15 years reveals only 4% of the 2005 population remains alive on Guam.

The 15-year data set validated an earlier observation that plant size was negatively correlated with speed of mortality. The first wave of mortality included seedlings — 100% of which were killed by 2006 — and the second wave of mortality encompassed juvenile plants, 100% of which were killed by 2014. The persisting populations are comprised of large individuals that possessed substantial stored resources when the non-native pests initiated the threats.

“The means by which the invasion of an island by a non-native herbivore can wreak such havoc is actually two-fold,” said Murukesan V. Krishnapillai, one of the authors of the study. “First, the native tree that is attacked by the new pest has spent millennia evolving without a comparable herbivore and, therefore, possesses few defensive strategies. Second, the pest has escaped from its own native habitat where it co-evolved with natural enemies, and, therefore, the new island environment contains no natural enemies to tamp down the pests’ population growth.”

The Guam team used what biologists call a Type 1 right-censoring approach to document the plant mortality and joined the College of Micronesia in the Federated States of Micronesia to showcase the forests on the Micronesian island of Yap as an unthreatened healthy population of the same tree species.

The team’s research on Guam and within the native geographic range of these two pests indicate the armored scale’s threats are due to the release from the natural enemies in its homeland, and the butterfly’s threats are caused by the absence of defensive strategies by the tree.

The study also illuminated two other spatial factors that have influenced the plant population’s responses to the non-native insect herbivore threats. First, the populations in Western localities have exhibited much more mortality than the populations in Eastern localities. Second, the plants within large contiguous forests have exhibited less damage than plants within forest fragments.

The authors contend that this sort of information is important for informing the factors that influence localized loss of genes of endangered tree species.

“Conservationists need developing knowledge like this to craft the most appropriate mitigation strategies and identify where available funds should be spent,” Ares said.

The long-term nature of the study, which Ares said is rare in contemporary academia, and the use of benchmarking were crucial in developing a full understanding of rapidly developing threats to island tree populations. The decision to establish permanent plots throughout Guam prior to the onset of the predicted damage from the non-native pests has proven to be crucial for understanding the 15 years of damage.

The study concluded that the only high priority activity to conserve the Cycas micronesica species in Guam is to establish a complex integrated biological control program under the direction of scientists with international expertise. The report says that knowing that plant size and habitat traits influence cycad susceptibility to non-native threats can now inform conservation management decisions.

Tags: BiodiversityBiologyEcology/EnvironmentEntomologyForestryParasitologyPlant SciencesScience/Health and the Law
Share25Tweet16Share4ShareSendShare
ADVERTISEMENT
No Result
View All Result