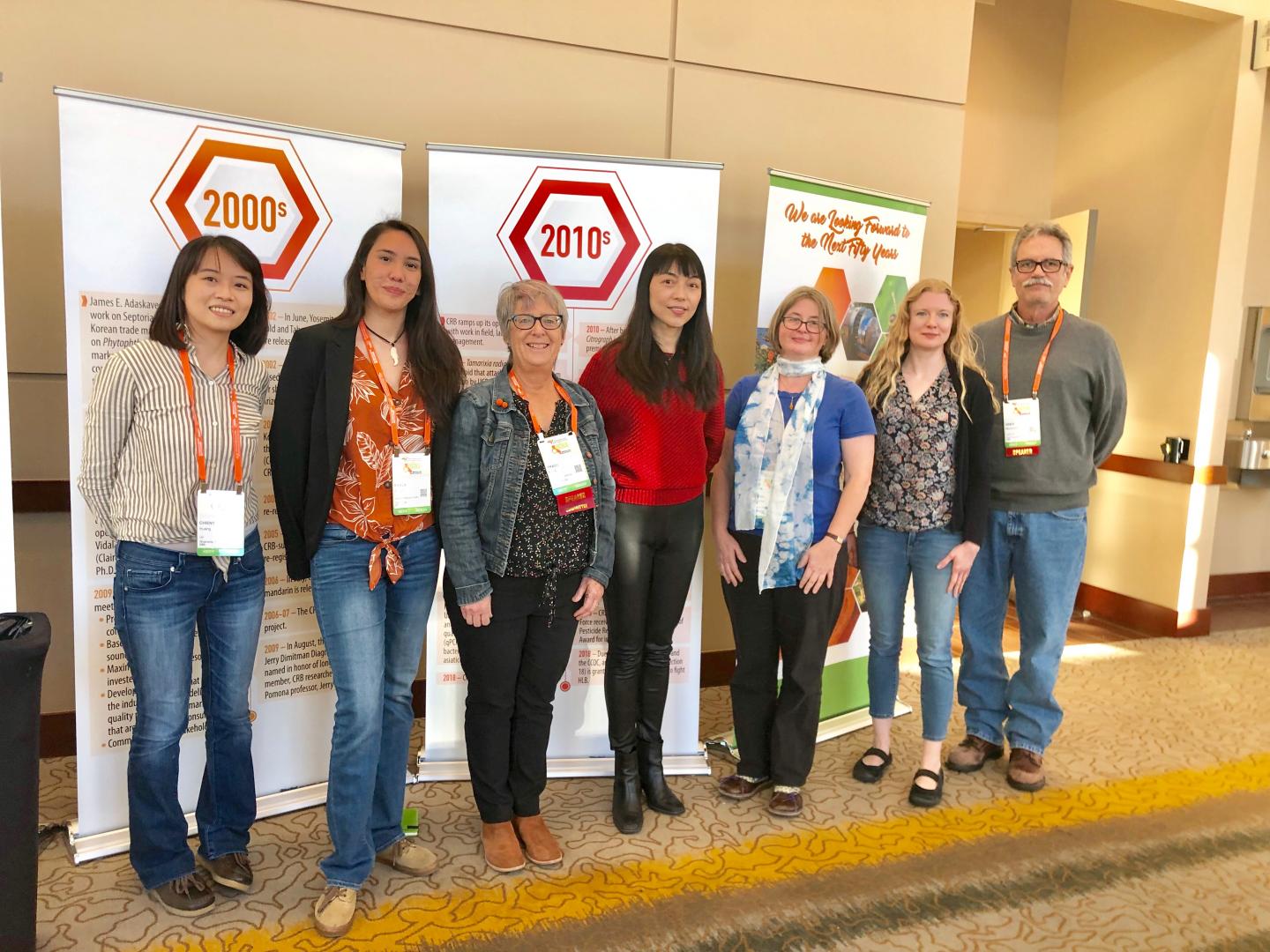 RIVERSIDE, Calif. — A molecular geneticist at the University of California, Riverside, has secured a four-year grant aimed at halting the spread of a deadly bacterial disease that continues to spread among California’s citrus trees. The award of nearly $4 million, which comes from the National Institute of Food and Agriculture of the U.S. Department of Agriculture, will help cure citrus trees affected by huanglongbing disease, or HLB, and protect healthy trees from infection.

“HLB has no cure so far,” said Jin, a professor of microbiology and plant pathology, who holds the Cy Mouradick Endowed Chair at UCR and is a member of the university’s Institute for Integrative Genome Biology. “We have already identified a novel class of peptides by studying HLB-tolerant close relatives and hybrids of citrus. These peptides can directly kill the HLB bacteria and inhibit their spread in HLB-affected trees. They can also induce plant immune responses to protect trees from future HLB infection.”

HLB, which is also known as citrus greening disease and eventually kills citrus trees, has decimated Florida’s citrus groves; the threat to California’s multibillion-dollar citrus industry is grave. The Asian citrus psyllid, the insect that vectors the HLB bacteria from tree to tree, has been found also in Louisiana, Georgia, South Carolina, Texas, Cuba, Belize, and Mexico’s Yucatan peninsula.

To date, the disease has been controlled by planting HLB-free citrus germplasm, swiftly eradicating infected citrus plants, and using systemic insecticides on the Asian citrus psyllid. The University of California’s Citrus Clonal Protection Program, located in Riverside, provides a mechanism for the safe introduction of pest- and disease-free citrus germplasm into California, where the best strategy so far to keep the disease at bay is the application of insecticide treatments to prevent the psyllid’s spread into citrus-growing regions.

“These approaches, however, cannot totally control the disease and do not directly kill the HLB bacteria,” Jin said. “Our approach not only kills the bacteria in affected trees but also can potentially serve as a vaccine for young, healthy citrus trees.”

Jin explained that the peptides her lab has identified are cost-effective, stable at high temperatures, and easy to synthesize. They work better than antibiotics, she said, and are safe, being derived from close relatives of citrus, such as the long-consumed Australian finger lime. The peptides are effective also in killing zebra chip disease bacteria that can threaten the potato industry.

Jin will be accompanied in the research by the following co-principal investigators: UCR’s Kerry Mauck, Georgios Vidalakis, Bruce Babcock, and Tracy Kahn; Kristine Elvin Godfrey of UC Davis; Gregory McCollum of USDA; and Svetlana Yuryevna Folimonova and Megan Melissa Dewdney of the University of Florida.

“What we have is a national emergency,” Jin said. “We need to do whatever we can to make sure that California or other citrus-producing regions do not experience the kind of devastation that took place in Florida. At the same time, we also aim to develop therapeutic solutions to treat and rescue HLB-affected trees in Florida.”

UCR will receive about $2.5 million of the grant. The project will involve the participation of UCR undergraduate and graduate students.

UCR’s Office of Technology Commercialization has filed a patent on the technology.

Scienmag Oct 23, 2019
Credit: UTSA Smart bulbs are expected to be a popular purchase this holiday season. But could lighting…