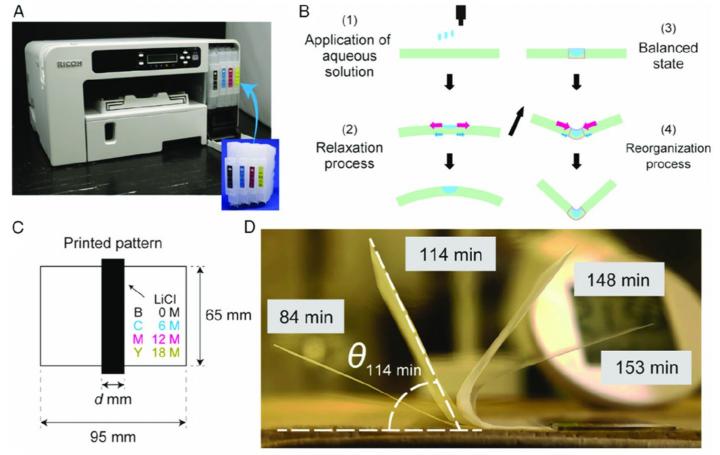 When natural motion comes to mind, plants are most likely at the bottom of most people’s list. The truth is that plants can perform complex movements, but they only do so very slowly. The main mechanism behind plant movement is water absorption and release; the cellulose present in plant tissues draws water in and expands, and the underlying arrangement of cellulose fibers guides the motions as needed. Now, what if we drew ideas from this natural phenomenon and used them for future engineering applications?

Surprisingly, it turns out that this type of motion could become the basis to produce new types of robots and mechatronic devices. In a recent study published in Advanced Intelligent Systems, a team of scientists from Shibaura Institute of Technology (SIT) and Waseda University, Japan, developed a most simple methodology based on this nature-derived concept to make paper fold itself as desired using nothing but a standard inkjet printer. Dr. Hiroki Shigemune from SIT, lead scientist on the study, explains their motivation: “Printing technologies to produce objects rapidly are currently in the spotlight, such as 3D printing. However, printing functional mechatronic devices remains a huge challenge; we tackled this by finding a convenient method to print self-folding paper structures. Since paper is mostly cellulose, we drew inspiration from plants.”

The researchers first filled the ink cartridges of a regular printer with different aqueous solutions and printed simple straight lines across papers, causing them to fold by themselves (Figure 1). After settling on the best solute (LiCl, lithium chloride), they explored how different concentrations caused different self-folding times. To this end, they filled the four ink cartridges on the printer–for black, magenta, yellow, and cyan inks–with aqueous LiCl solutions at four different concentrations. Whereas pure water caused an almost immediate folding reaction, a high concentration of LiCl caused a slightly changed folding start. In turn, a relatively lower concentration caused a huge change in folding start and even slower folding times.

With the self-folding mechanism in place, all the scientists had to do was give the printer a document to print containing lines of the corresponding colors depending on the desired folding sequence. This simple approach allowed them to produce various self-folding origami structures, including a traditional paper plane and a small paper ladder that positions, hangs, and then retracts itself. “Our technology can be used to very easily produce flexible, stretchable, deployable, and crushable origami structures by simply designing an appropriate printing pattern,” remarks Dr. Shingo Maeda from SIT.

Now, the research team will focus on using this novel self-folding method to develop mechatronic devices. To do this, they will combine this approach with a previous technique they themselves had developed; a way to print electrical wiring onto paper also using a standard printer. “By merging these two technologies, we will realize a rapid yet simple fabrication procedure for mechatronic elements and paper robots,” says Dr. Shuji Hashimoto from Waseda University, “It would find applications in the space, healthcare, and agriculture fields, where tailor-made and disposable intelligent devices are needed.”

It is also worth noting that the self-folding process requires no external energy sources nor complex machinery of any type, making it an attractive environment-friendly option to realize truly plant-inspired motion. Dr. Hideyuki Sawada from Waseda University remarks that they succeeded in achieving ‘posteriori phototropism’ in a silicone rod. In other words, they managed to recreate the natural movement of some plants, such as sunflowers, when they selectively face towards the sun or other light sources. “Using this technique, we could design more efficient solar panels by ensuring they face the sun at all times,” he explains.

This study showcases how we can draw inspiration from nature to develop revolutionary technology, even with commonplace devices such as an inkjet printer!

About Shibaura Institute of Technology, Japan

Hiroki Shigemune graduated from the Dept. of Applied Physics at Waseda University in 2014. He then obtained a master’s degree and a PhD from Waseda University in 2016 and 2018, respectively. He joined SIT in 2019, where he works as an Assistant Professor and leads the Shigemune lab. He has published over 20 refereed papers. His main research interests are manufacturing technologies, smart materials, and soft robotics.