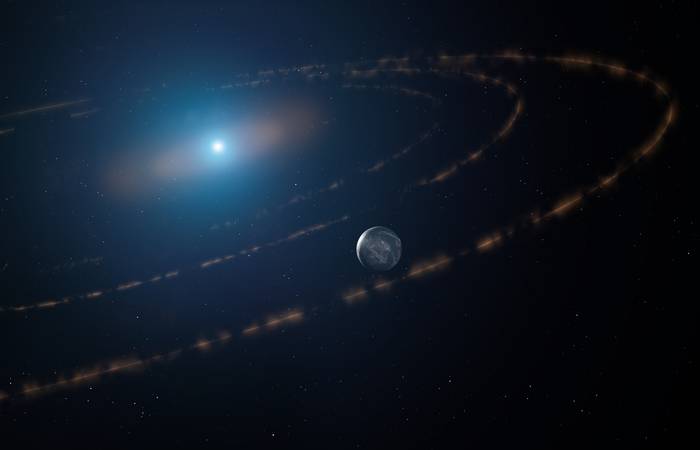 A ring of planetary debris studded with moon-sized structures has been observed orbiting close to a white dwarf star, hinting at a nearby planet in the “habitable zone” where water and life could exist, according to a new study led by UCL researchers.

White dwarfs are glowing embers of stars that have burned through all their hydrogen fuel. Nearly all stars, including the Sun, will eventually become white dwarfs, but very little is known about their planetary systems.

In the study, published in Monthly Notices of the Royal Astronomical Society, an international team of researchers measured light from a white dwarf in the Milky Way known as WD1054–226, using data from ground- and space-based telescopes.

To their surprise, they found pronounced dips in light corresponding to 65 evenly spaced clouds of planetary debris orbiting the star every 25 hours. The researchers concluded that the precise regularity of the transiting structures – dimming the star’s light every 23 minutes – suggests they are kept in such a precise arrangement by a nearby planet.

Lead author Professor Jay Farihi (UCL Physics & Astronomy) said: “This is the first time astronomers have detected any kind of planetary body in the habitable zone of a white dwarf.

“The moon-sized structures we have observed are irregular and dusty (e.g. comet-like) rather than solid, spherical bodies.  Their absolute regularity, one passing in front of the star every 23 minutes, is a mystery we cannot currently explain.

“An exciting possibility is that these bodies are kept in such an evenly-spaced orbital pattern because of the gravitational influence of a nearby planet. Without this influence, friction and collisions would cause the structures to disperse, losing the precise regularity that is observed.  A precedent for this ‘shepherding’ is the way the gravitational pull of moons around Neptune and Saturn help to create stable ring structures orbiting these planets.

“The possibility of a planet in the habitable zone is exciting and also unexpected; we were not looking for this.  However, it is important to keep in mind that more evidence is necessary to confirm the presence of a planet. We cannot observe the planet directly so confirmation may come by comparing computer models with further observations of the star and orbiting debris.”

It is expected that this orbit around the white dwarf was swept clear during the giant star phase of its life, and thus any planet that can potentially host water and thus life would be a recent development.  The area would be habitable for at least two billion years, including at least one billion years into the future.

More than 95% of all stars will eventually become white dwarfs. The exceptions are the largest stars that explode and become either black holes or neutron stars.

Professor Farihi added: “Since our Sun will become a white dwarf in a few billion years, our study provides a glimpse into the future of our own solar system.”

When stars begin running out of hydrogen, they expand and cool, becoming red giants. The Sun will enter this phase in four to five billion years, swallowing Mercury, Venus, and possibly Earth. Once the outer material has gently blown away and hydrogen is exhausted, the hot core of the star remains, slowly cooling over billions of years – this is the star’s white dwarf phase.

Planets orbiting white dwarfs are challenging for astronomers to detect because the stars are much fainter than main-sequence stars (like the Sun). So far, astronomers have only found tentative evidence of a gas giant (like Jupiter) orbiting a white dwarf.

For the new study, researchers observed WD1054–226, a white dwarf 117 light years away, recording changes in its light over 18 nights using the ULTRACAM high-speed camera fixed on to the ESO 3.5m New Technology Telescope (NTT) at the La Silla Observatory in Chile. In order to better interpret the changes in light, the researchers also looked at data from the NASA Transiting Exoplanet Survey Satellite (TESS), which allowed the researchers to confirm the planetary structures had a 25-hour orbit.

They found that the light from WD1054–226 was always somewhat obscured by enormous clouds of orbiting material passing in front of it, suggesting a ring of planetary debris orbiting the star.

The habitable zone, sometimes called the Goldilocks zone, is the area where the temperature would theoretically allow liquid water to exist on the surface of a planet.  Compared to a star like the Sun, the habitable zone of a white dwarf will be smaller and closer to the star as white dwarfs give off less light and thus heat.

The structures observed in the study orbit in an area that would have been enveloped by the star while it was a red giant, so are likely to have formed or arrived relatively recently, rather than survived from the birth of the star and its planetary system.

Relentless and Complex Transits from a Planetesimal Debris Disk’