Acne is among the most common skin diseases in the United States, according to the American Academy of Dermatology Association, affecting up to 50 million Americans each year. It is also among the least studied. 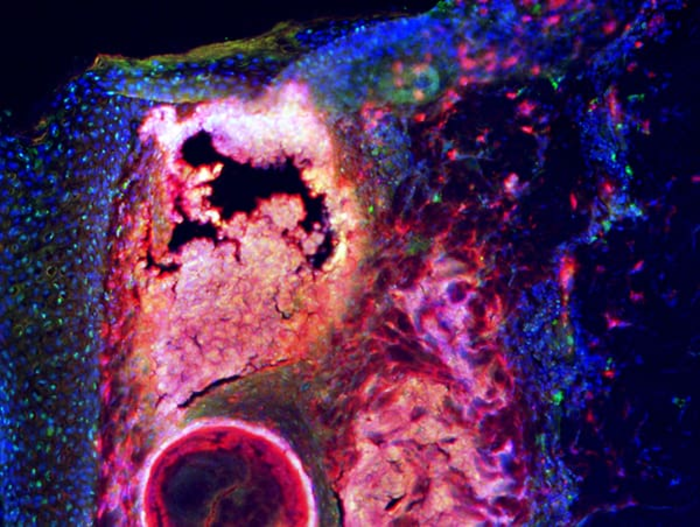 Acne is among the most common skin diseases in the United States, according to the American Academy of Dermatology Association, affecting up to 50 million Americans each year. It is also among the least studied.

It’s known that hair follicles assist in the development of a pimple, but new research suggests the skin cells outside of these hair follicles play a larger role. The findings published in the February 16, 2022 issue of Science Translational Medicine.

“These findings may transform the way we treat acne,” said Richard Gallo, MD, PhD, Ima Gigli Distinguished Professor of Dermatology and chair of the Department of Dermatology at UC San Diego School of Medicine. “Previously, it was thought that hair follicles were most important for acne to develop. In this study, we looked at the cells outside of the hair follicle and found they had a major effect on controlling bacteria and the development of acne.”

The cells are called fibroblasts, common in connective tissues throughout the body. In skin, they produce an antimicrobial peptide called cathelicidin, which plays a key role in acne development, said Gallo.

To counter an infection within a hair follicle, the surrounding skin undergoes a process called reactive adipogenesis in which fibroblasts transform into fat cells. Cathelicidin is produced as well to help combat the infection by suppressing bacteria that can cause acne.

The discovery of cathelicidin’s role came as a surprise.

“We began our research wanting to understand the biology of acne and specifically looked at the role of fibroblasts, which typically provide structural support in the deeper layers of the skin,” said first author Alan O’Neill, PhD, project scientist at UC San Diego School of Medicine. “What we uncovered instead was that these cells were activated to produce large amounts of an important antimicrobial, cathelicidin, in response to acne-causing bacteria called Cutibacterium acnes.”

The research team performed skin biopsies on acne patients treated for several months with retinoids, a class of chemicals derived from vitamin A found to promote skin health. To the researchers’ surprise, the drug enhanced cathelicidin expression after treatment, thus finding an additional, unknown mechanism for why retinoids help treat acne.

To support these findings, researchers studied skin lesions on mice injected with the acne-causing bacteria and observed similar treatment responses in the mice.

“Cathelicidin being so highly expressed in acne biopsy tissue was a very interesting finding to us,” said Gallo. “Knowing this will be helpful in developing a more targeted therapy to treat acne.”

Currently, retinoid treatment focuses on controlling the development of lipids in skin cells. One major side effect of these drugs are their teratogenic effects, causing fetal abnormalities in pregnant people. This limits the use of these drugs to only severe cases. The research team hopes these findings may assist in developing a more targeted approach to treating acne.

“This research could assist in identifying new treatment options that specifically target the fibroblast’s ability to produce cathelicidin,” said O’Neill. “Thus creating a therapeutic for acne that would be more selective with potentially less harmful side effects.”

Richard L. Gallo is a cofounder, consultant, member of the scientific advisory board and holds equity in MatriSys Bioscience.