Physics of disaster: How mudslides move

In early December 2017, the Thomas Fire ravaged nearly 300,000 acres of Southern California. The intense heat of the flames not only killed trees and vegetation on the hillsides above Montecito, it vaporized their roots as well. 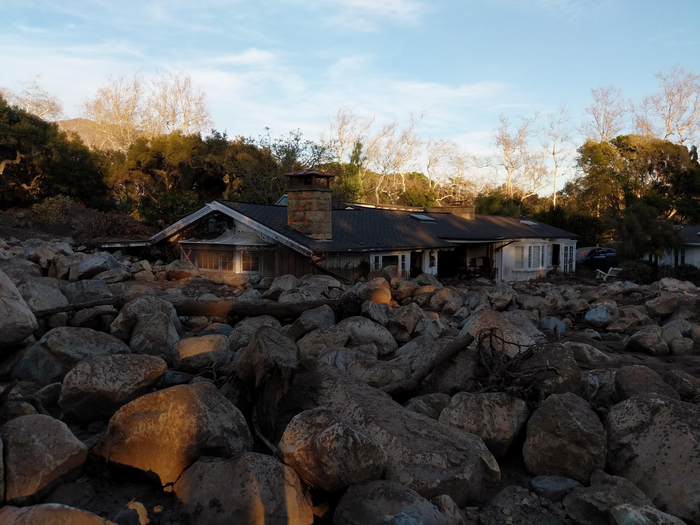 In early December 2017, the Thomas Fire ravaged nearly 300,000 acres of Southern California. The intense heat of the flames not only killed trees and vegetation on the hillsides above Montecito, it vaporized their roots as well.

A month later, in the pre-dawn hours of Jan. 9, a strong storm pelted the barren slopes with more than half an inch of rain in five minutes. The rootless soil transformed into a powerful slurry, churning down a creek-carved canyon and picking up boulders in the rush before fanning out at the bottom and barreling into homes. Twenty-three people died in the disaster.

Could this tragedy have been avoided? What is the tipping point at which a solid slope begins to ooze like a liquid? New findings from a team led by Douglas Jerolmack of Penn’s School of Arts & Sciences and School of Engineering and Applied Science in collaboration with Paulo Arratia of Penn Engineering and researchers from the University of California,  Santa Barbara (UCSB), apply cutting-edge physics to answer these questions. Their study, published in the Proceedings of the National Academy of Sciences, performed laboratory experiments that determined how the failure and flow behavior of samples from the Montecito mudslides was related to material properties of the soil.

“We weren’t there to see it happen,” says Jerolmack, “but our idea was, ‘Could we learn something about the process of how a solid hillside loses its rigidity by measuring how mixtures of water and soil flow when they’re at different concentrations?’”

Melding the theoretical and the applied

During the winter of 2018, Jerolmack was on sabbatical and traveled to the Kavli Institute for Theoretical Physics at UCSB—but not to study mudslides. “It’s a place to come and hammer out problems that are frontier topics in physics,” he says. “I’m a geophysicist, but I wasn’t there to do geoscience. I was there to learn about that frontier physics, especially about the physics of dense suspensions.”

Three days after Jerolmack arrived, however, the debris flows occurred. About a month later, when it was safe to do so, Thomas Dunne, a geologist at UCSB and a coauthor on the paper, invited him to collect samples from Montecito.

It was a grim task. Some samples came from the devastated remains of homes, where mud flows from the hillside were strong enough to push massive boulders down creek beds all the way up to—and sometimes through—houses. “By the time we got near the mouth of the canyon, it was almost like a phalanx of boulders,” Jerolmack says. “Houses were buried to their roof lines; cars were pulverized and unrecognizable.”

Taking the samples back to the lab, the researchers’ goal was to model how the composition of the mud and the stresses it is subjected to influence when it begins to flow, overcoming the forces that lend substances rigidity, what scientists call a “jammed state.”

It wasn’t the first time that engineers and scientists have attempted this kind of modeling from field samples. Some studies had tried to simulate conditions in the field by placing shovelfuls of dirt and mud in large rheometers, a device that spins samples rapidly to measure their viscosity, or how their flow responds to a defined force. Typical rheometers, however, only give accurate results if a substance is homogeneous and well-mixed, not like the Montecito samples, which contained various amounts of ash, clay, and rocks.

More high-tech and sensitive rheometers, which measure the viscosity of tiny quantities, can overcome this drawback. But they come with another: samples that contain larger particles—say, rocks in mud—could clog their delicate workings.

“We realized we could take measurements that we knew to be reliable and precise if we used this exquisitely sensitive device,” Jerolmack says, “even if it came at the cost of having to sieve out the coarsest material from our samples.”

A clear signal from ‘dirty’ samples

The investigation relied on the expertise of each team member. UCSB postdoc Hadis Matinpour prepared, recorded, and plotted out the first samples and analyzed the composition of natural particles. Sarah Haber, at the time a research assistant at Penn, determined the chemical composition of the materials, including important quantities like clay content.

“We had all this raw data and were having trouble making sense of it,” Jerolmack says. “Robert Kostynick, then a master’s student at Penn, picked up the project for his thesis and put in a huge amount of legwork and thought to organize, interpret, and try to collapse a lot of the data.”

Those contributions leaned on an understanding of cutting-edge physics related to the forces at work in dense suspensions. These include friction, as particles rub against one another; lubrication, if a thin film of water helps particles slide past one another; or cohesion, if sticky particles like clay bind together.

“We had the audacity, or maybe the naiveté, to try to apply some really recent developments in physics to a really messy material,” says Jerolmack.

Penn postdoc Shravan Pradeep, who has a deep background in rheology, or the study of how complex materials flow, also joined the team. He pinpointed precisely how the material properties of the soil—particle sizes and clay content—determined its failure and flow properties. His analysis showed that understanding particles’ stickiness, measured as “yield stress,” and how closely particles can pack together in the “jammed state,” could almost entirely account for the results observed in the Montecito samples.

Yield stress can be envisioned by picturing toothpaste or hair gel, Jerolmack says. In a tube, these materials do not flow. Only when a force is applied to the tube—a firm squeeze—do they begin to flow. The jammed state can be thought of as the point at which particles are so crowded together that they are unable to move past one other.

“What we realized was with debris flows, when you’re not pushing on them hard, their behavior is governed entirely by yield stress,” says Jerolmack. “But when you’re pushing very hard—the force of gravity carrying a debris flow down a mountainside—the viscous behavior comes to dominate and is determined by how far the particle density is from the jammed state.”

In the lab, the researchers were not able to simulate failure, the point at which a solid soil, constrained by “jamming,” transitioned into a moveable mud. But they could approximate the reverse, evaluating the muddy materials mixed with water at different concentrations to extrapolate the jammed state.

“The beauty of it is that, when you get samples from nature, they can be all over the place in terms of their composition, how much ash they contain, the location you collected from,” says Arratia. “Yet in the end, all the data just collapsed into a single master curve. This tells you that now, you have a universal understanding that holds whether you’re in the lab or you’re on the mountains of Montecito.”

With climate change, wildfire frequency and intensity are growing in many regions, as is the intensity of precipitation events. Thus, the risk of catastrophic mudslides isn’t disappearing any time soon.

The new findings to predict yield stress and the jammed state can help inform modeling that federal and local governments do to simulate debris flows, the researchers say. “Say, if it rains this hard and I have this kind of material, how fast is it going to flow and how far,” Jerolmack says.

And in a more general way, Jerolmack and his colleagues hope the work, which combined theoretical and empirical sciences, leads to more such interdisciplinary approaches. “We can take late-breaking discoveries in physics and actually relate them pretty directly to a meaningful environmental or geophysical problem.”