The reference particle captured light for a time exceeding 200 periods of one wave oscillation, 20-40 times longer than usual; this opens new perspectives in such areas as manufacturing compact sensors, night vision devices, and optical data transmission 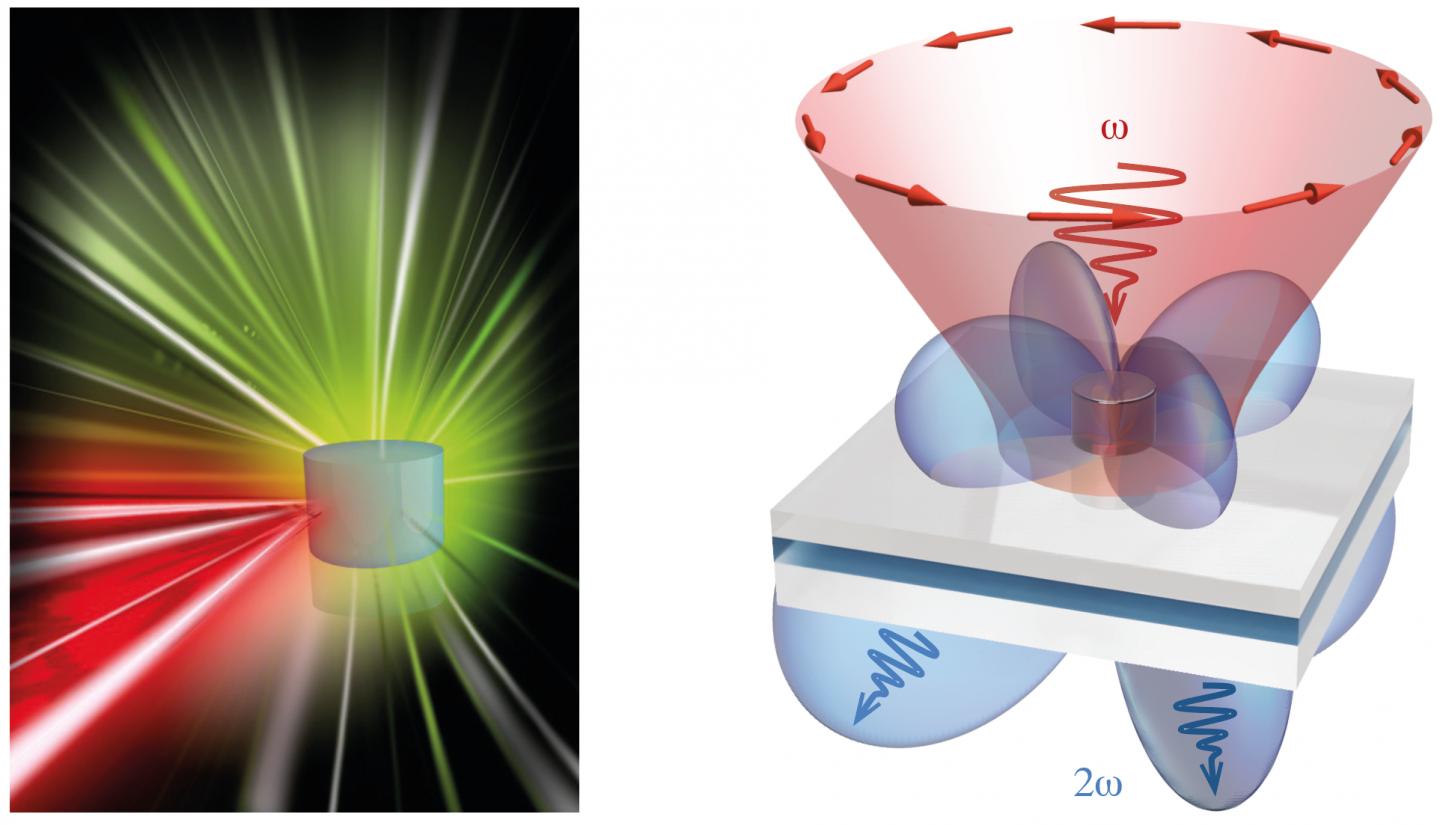 An international team of researchers from ITMO University, the Australian National University, and Korea University have experimentally trapped an electromagnetic wave in a gallium arsenide nanoresonator a few hundred nanometers in size for a record-breaking time. Earlier attempts to trap light for such a long time have only been successful with much larger resonators. In addition, the researchers have provided experimental proof that this resonator may be used as a basis for an efficient light frequency nanoconverter. The results of this research have raised great interest among the scientific community and were published in Science, one of the world’s leading academic journals. Scientists have suggested about drastically new opportunities for subwavelength optics and nanophotonics – including the development of compact sensors, night vision devices, and optical data transmission technologies.

The problem of manipulating the properties of electromagnetic waves at the nanoscale is of paramount importance in modern physics. Using light, we can transfer data over long distances, record and read-out data, and perform other operations critical to data processing. To do this, light needs to be trapped in a small space and held there for a long period of time, which is something that physicists have only succeeded in doing with objects of a significant size, larger than the wavelength of light. This limits the use of optical signals in optoelectronics.

Two years ago, an international research team from ITMO University, the Australian National University, and the Ioffe Institute had theoretically predicted a new mechanism that allows scientists to trap light in miniature resonators much smaller than the wavelength of light and measured in hundreds of nanometers. However, until recently, no one had implemented the mechanism in practice.

An international team of researchers from ITMO University, the Australian National University, and Korea University was assembled to prove this hypothesis. First, they developed the concept: gallium arsenide was chosen as the key material, being a semiconductor with a high refractive index and strong nonlinear response in the near-infrared range. Researchers also decided on the most optimal shape for the resonator that would efficiently trap electromagnetic radiation.

In order to trap light efficiently, the ray must be reflected from the object’s inner boundaries as many times as possible without escaping the resonator. One might assume that the best solution would be to make the object as complex as possible. As a matter of fact, it is just opposite: the more planes a body has, the more likely light is to escape it. The near-ideal shape for this case was a cylinder, which possesses the minimal number of boundaries. One question that remained to be solved was which ratio of diameter to height would be the most effective for trapping of light. After mathematical calculations, the hypothesis had to be confirmed experimentally.

“We used gallium arsenide to create cylinders around 700 nanometers in height and with varying diameters close to 900 nanometers. They’re almost invisible to the naked eye. As our experiments have shown, the reference particle had captured light for a time exceeding 200 times the period of one wave oscillation. Usually, for particles of that size the ratio is five to ten periods of wave oscillations. And we obtained 200! ” says Kirill Koshelev, the the first co-author of the paper.

The scientists divided their study into two parts: one is an experimental confirmation of the theory expressed earlier, and the other is an example of how such resonators could be used. For instance, the trap has been utilized for a nanodevice capable of changing the frequency, and therefore color, of a light wave. Upon passing through this resonator, the infrared beam turned red, becoming visible to the human eye.

The frequency conversion of electromagnetic oscillations is not the only application for this technology. It also has potential applications in various sensing devices and even special glass coatings that would make it possible to produce colorful night-vision.

“If the resonator is able to efficiently trap light, then placing, say, a molecule next to it will increase the efficiency of the molecule’s interaction with light by an order of magnitude, and the presence of even a singular molecule can easily be detected experimentally. This principle can be used in the development of highly-sensitive biosensors. Due to the resonators’ ability to modify the wavelength of light, they can be used in night vision devices. After all, even in the darkness, there are electromagnetic infrared waves that are unseen to the human eye. By transforming their wavelength, we could see in the dark. All you’d need to do is to apply these cylinders to glasses or the windshield of a car. They’d be invisible to the eye but still allow us to see much better in the dark than we can on our own,” explains Kirill Koshelev.

Besides gallium arsenide, such traps can be made using other dielectrics or semiconductors, such as, for instance, silicon, which is the most common material in modern microelectronics. Also, the optimal form for light trapping, namely the ratio of a cylinder’s diameter to its height, can be scaled up to create larger traps.

ITMO University (Saint Petersburg) is a national research university, the leading Russian university in the field of information and photonic technologies. The university is a leader of Project 5-100, the Russian academic excellence program.

In 2016, ITMO University received the UNESCO Medal “For the Development of Nanosciences and Nanotechnologies” for its unique environment merging science, education and innovations.

Since 2016, ITMO University has been featured in the world’s top 100 universities in Computer Science, according to the Times Higher Education subject ranking. In 2019, it got represented in the world’s top 100 universities in Automation & Control for the first time, and strengthened its positions in Nanotechnology (top 300) and Material Sciences (top 400) in the Shanghai subject ranking (ARWU).

According to Quaquarelly Symonds (QS) subject rankings for 2019, ITMO University is one of the world’s top 300 universities in Engineering & Technology and Physics & Astronomy; it also became the only Russian university featured in Art & Design (top 200 universities).

In 2019, ITMO University was featured in the world’s top 500 institutions in THE and QS World University Rankings, as well as being represented in 13 subject rankings published by ARWU, THE and QS.

IT’s MOre than a UNIVERSITY!

Urine reuse as fertilizer is not likely to transfer antibiotic resistance