A “dark” environment was created at the Radioactive Ion Beam Line in Lanzhou (RIBLL), China, to look for a faint flash of light as evidence of isomer depletion. Such depletion is required to harness nuclear energy stored in long-lived isomeric states through the process of nuclear excitation by electron capture (NEEC). 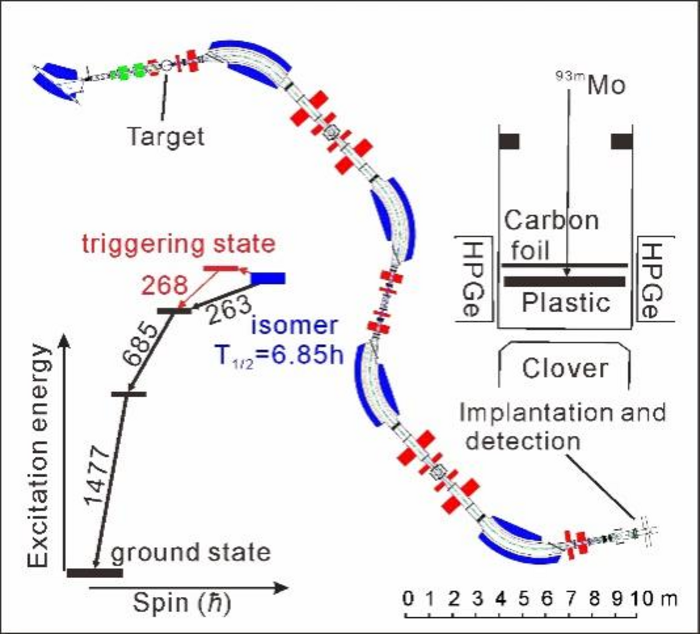 A “dark” environment was created at the Radioactive Ion Beam Line in Lanzhou (RIBLL), China, to look for a faint flash of light as evidence of isomer depletion. Such depletion is required to harness nuclear energy stored in long-lived isomeric states through the process of nuclear excitation by electron capture (NEEC).

However, in this independent experiment, evidence of isomer depletion was not observed. Results were published in Physical Review Letters on June 17, with the NEEC probability measured at less than 2×10-5, thus casting doubt on the first reported experimental observation of NEEC in 2018.

Nevertheless, artificially controlling the energy release process is a great challenge. Scientific consensus expects the rapid release of isomeric energy to be achieved by isomer depletion, that is, by exciting the isomer to an adjacent excited state that decays to the ground state immediately. Scientists have proposed several methods, among which NEEC has attracted particular attention.

The first experimental observation of NEEC was reported in 2018 with a measured excitation probability of 1.0(3)%, which is about nine orders of magnitude larger than the theoretical expectation. Later, researchers pointed out a possible overestimation owing to contamination from the heavy gamma background. This comment and the corresponding response induced a lively debate on the validity of the reported NEEC observation, calling for verification from another independent measurement. The debate was focused on whether the researchers sufficiently considered the effect of the heavy gamma background.

To reinvestigate isomer depletion, researchers at the Institute of Modern Physics (IMP) of the Chinese Academy of Sciences (CAS) and their collaborators used an isomer beam to avoid contamination from the heavy gamma background. The experiment was conducted at RIBLL, which is housed at the Heavy Ion Research Facility in Lanzhou.

“Our experiment was designed to escape from the gamma background. In the previous work, researchers searched for the scarce special photons in a harsh light, like seeking a firefly in sunshine. For a refined survey, we drove it into the dark,” said GUO Song, a researcher at IMP.

In this experiment, 93mMo residues were produced at the primary target position and transported to the end of RIBLL to study isomer depletion during the slowing-down process of the ions in a low gamma-ray background environment.

The researchers did not observe isomer depletion at such a low gamma background. The excitation probability was determined to be less than 2×10-5, which is significantly lower than the previously reported probability and consistent with theoretical calculations.

GUO noted that there were several differences in setup between the two experiments, but “the gamma background is still the most striking factor.”

“The experiment they report is demonstrably superior to the earlier work in that the 93mMo nucleus formed in a fusion evaporation reaction was separated from the incident beam via traversal through the RIBLL separator. This allows for a low-background signal to be obtained that conclusively limited the NEEC rate,” said one referee for Physical Review Letters.

It is worth noting that it is the first attempt to use an isomer beam in studies on NEEC. The significantly increased experimental sensitivity indicates that it is a promising approach for studying isomer depletion.