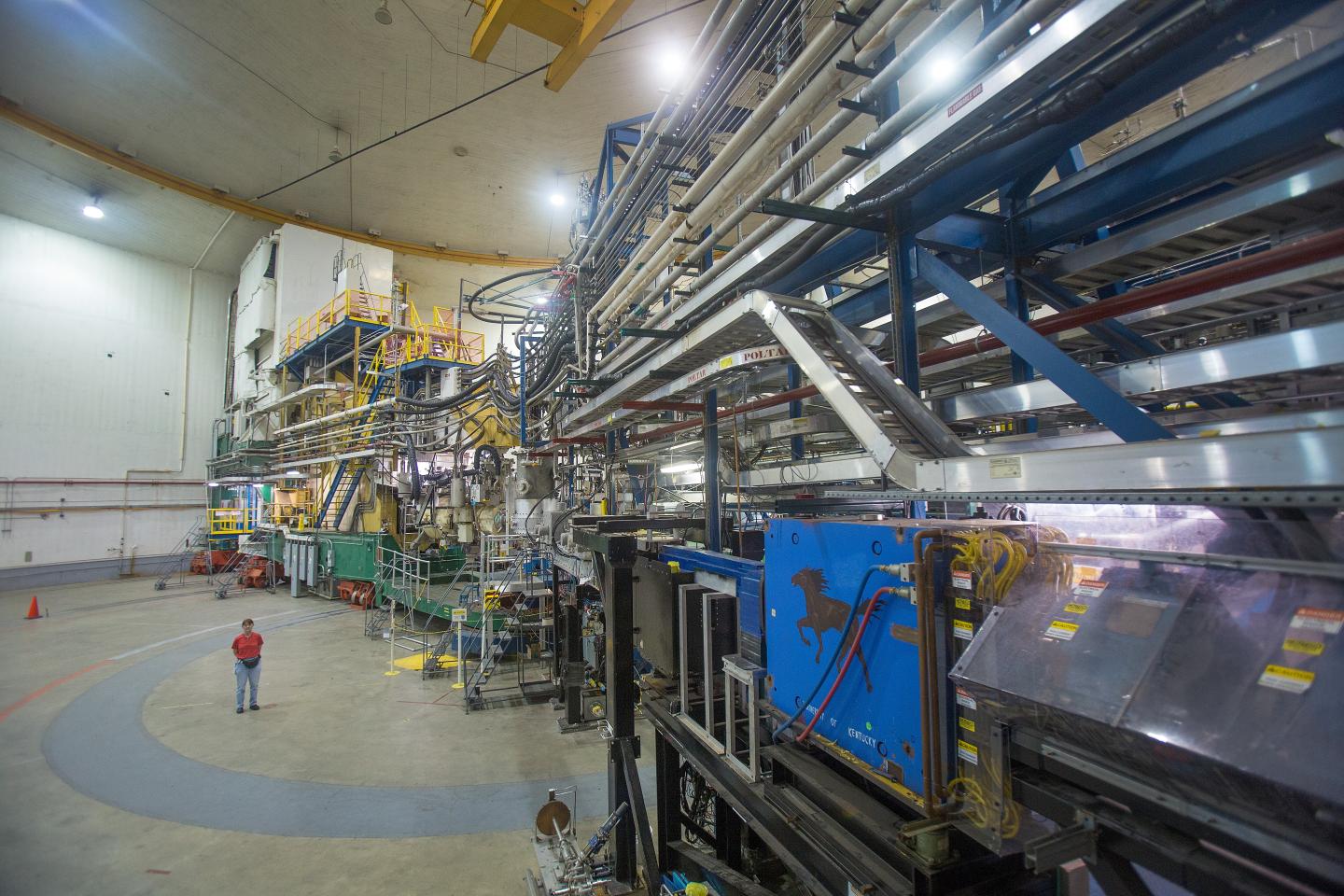 NEWPORT NEWS – Nuclear physicists have made a new, highly accurate measurement of the thickness of the neutron “skin” that encompasses the lead nucleus in experiments conducted at the U.S. Department of Energy’s Thomas Jefferson National Accelerator Facility and just published in Physical Review Letters. The result, which revealed a neutron skin thickness of .28 millionths of a nanometer, has important implications for the structure and size of neutron stars.

“The question is about where the neutrons are in lead. Lead is a heavy nucleus – there’s extra neutrons, but as far as the nuclear force is concerned, an equal mix of protons and neutrons works better,” said Kent Paschke, a professor at the University of Virginia and experiment co-spokesperson.

Paschke explained that light nuclei, those with just a few protons, typically have equal numbers of protons and neutrons inside. As nuclei get heavier, they need more neutrons than protons to remain stable. All stable nuclei that have more than 20 protons have more neutrons than protons. For instance, lead has 82 protons and 126 neutrons. Measuring how these extra neutrons are distributed inside the nucleus is key input for understanding how heavy nuclei are put together.

The PREx experiment result, published in Physical Review Letters in 2012, provided the first experimental observation of this neutron skin using electron scattering techniques. Following that result, the collaboration set out to make a more precise measurement of its thickness in PREx-II. The measurement was carried out in the summer of 2019 using the Continuous Electron Beam Accelerator Facility, a DOE Office of Science user facility. This experiment, like the first, measured the average size of the lead nucleus in terms of its neutrons.

Neutrons are difficult to measure, because many of the sensitive probes that physicists use to measure subatomic particles rely on measuring the particles’ electric charge through the electromagnetic interaction, one of the four interactions in nature. PREx makes use of a different fundamental force, the weak nuclear force, to study the distribution of neutrons.

“Protons have an electric charge and can be mapped using the electromagnetic force. Neutrons have no electric charge, but compared to protons they have a large weak charge, and so if you use the weak interaction, you can figure out where the neutrons are.” explained Paschke.

In the experiment, a precisely controlled beam of electrons was sent crashing into a thin sheet of cryogenically cooled lead. These electrons were spinning in their direction of motion, like a spiral on a football pass.

“Using this asymmetry in the scattering, we can identify the strength of the interaction, and that tells us the size of the volume occupied by neutrons. It tells us where the neutrons are compared to the protons.” said Krishna Kumar, an experiment co-spokesperson and professor at the University of Massachusetts Amherst.

The measurement required a high degree of precision to carry out successfully. Throughout the experimental run, the electron beam spin was flipped from one direction to its opposite 240 times per second, and then the electrons travelled nearly a mile through the CEBAF accelerator before being precisely placed on the target.

“On average over the entire run, we knew where the right- and left-hand beams were, relative to each other, within a width of 10 atoms,” said Kumar.

The electrons that had scattered off lead nuclei while leaving them intact were collected and analyzed. Then, the PREx-II collaboration combined it with the previous 2012 result and precision measurements of the lead nucleus’ proton radius, which is often referred to as its charge radius.

The researchers said that this figure is thicker than some theories had suggested, which has implications for the physical processes in neutron stars and their size.

“This is the most direct observation of the neutron skin. We are finding what we call a stiff equation of state – higher than expected pressure so that it’s difficult to squeeze these neutrons into the nucleus. And so, we’re finding that the density inside the nucleus is a little bit lower than was expected,” said Paschke.

The unexpectedly stiff equation of state implied by the PREx result has deep connections to recent observations of colliding neutron stars made by the Nobel Prize-winning Laser Interferometer Gravitational-Wave Observatory, or LIGO, experiment. LIGO is a large-scale physics observatory that was designed to detect gravitational waves.

“As neutron stars start to spiral around each other, they emit gravitational waves that are detected by LIGO. And as they get close in the last fraction of a second, the gravitational pull of one neutron star makes the other neutron star into a teardrop – it actually becomes oblong like an American football. If the neutron skin is larger, then it means a certain shape for the football, and if the neutron skin were smaller, it means a different shape for the football. And the shape of the football is measured by LIGO,” said Kumar. “The LIGO experiment and the PREx experiment did very different things, but they are connected by this fundamental equation – the equation of state of nuclear matter.”

The PREx-II experimental collaboration includes 13 Ph.D. students and seven postdoctoral research associates, as well as more than 70 other scientists from about 30 institutions.

This work was supported by DOE’s Office of Science, the National Science Foundation, the Natural Sciences and Engineering Research Council of Canada (NSERC) and the Italian Istituto Nazionale di Fisica Nucleare (INFN).