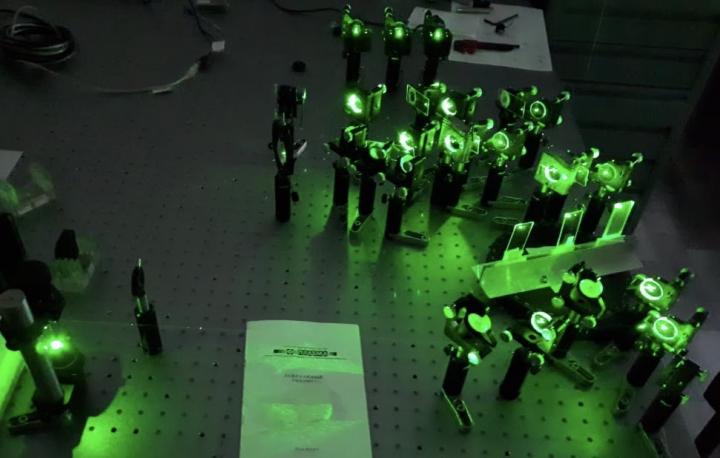 Researchers from the Moscow Institute of Physics and Technology, joined by a colleague from Argonne National Laboratory, U.S., have implemented an advanced quantum algorithm for measuring physical quantities using simple optical tools. Published in Scientific Reports, their study takes us a step closer to affordable linear optics-based sensors with high performance characteristics. Such tools are sought after in diverse research fields, from astronomy to biology.

Maximizing the sensitivity of measurement tools is crucial for any field of science and technology. Astronomers seek to detect remote cosmic phenomena, biologists need to discern exceedingly tiny organic structures, and engineers have to measure the positions and velocities of objects, to name a few examples.

Until recently, no measurement tool could ensure precision above the so-called shot noise limit, which has to do with the statistical features inherent in classical observations. Quantum technology has provided a way around this, boosting precision to the fundamental Heisenberg limit, stemming from the basic principles of quantum mechanics. The LIGO experiment, which detected gravitational waves for the first time in 2016, shows it is possible to achieve Heisenberg-limited sensitivity by combining complex optical interference schemes and quantum techniques.

Quantum metrology is a cutting-edge area of physics concerned with the technological and algorithmic tools for making highly precise quantum measurements. In their recent study, the team from MIPT and ANL fused quantum metrology with linear optics.

“We devised and constructed an optical scheme that runs the Fourier transform-based phase estimation procedure,” said study co-author Nikita Kirsanov from MIPT. “This procedure lies at the core of many quantum algorithms, including high-precision measurement protocols.”

A specific arrangement of a very large number of linear optical elements — beam splitters, phase shifters, and mirrors — makes it possible to gain information about the geometric angles, positions, velocities as well as other parameters of physical objects. The measurement involves encoding the quantity of interest in the optical phases, which are then determined directly.

“This research is a follow-up to our work on universal quantum measurement algorithms,” commented principal investigator Gordey Lesovik, who heads the MIPT Laboratory of the Physics of Quantum Information Technology. “In an earlier collaboration with a research group from Aalto University in Finland, we experimentally implemented a similar measurement algorithm on transmon qubits.”

The experiment showed that despite the large number of optical elements in the scheme, it is nevertheless tunable and controllable. According to the theoretical estimates provided in the paper linear optics tools are viable for implementing even operations that are considerably more complex.