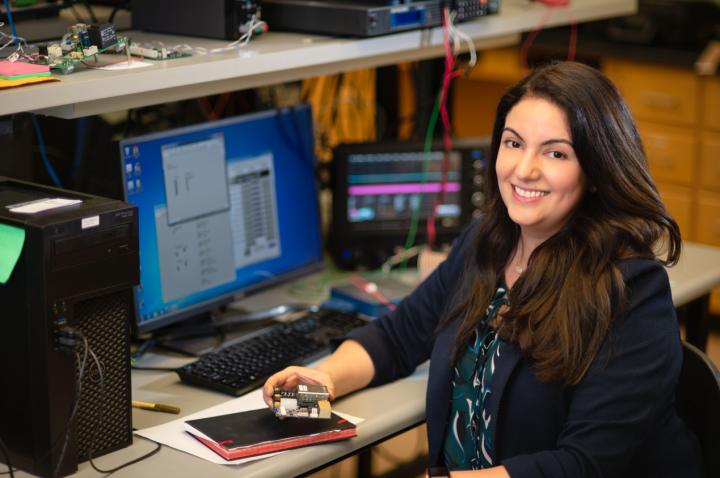 An assistant professor of physics at The University of Texas at Arlington is supervising part of an upgrade to the ATLAS experiment, the largest general-purpose particle physics project at the Large Hadron Collider (LHC) at CERN in Switzerland.

UTA’s Haleh Hadavand is supervising an upgrade to the so-called High Luminosity LHC era. With this upgrade, the LHC will be able to deliver more data in a shorter amount of time and therefore be able to answer fundamental questions about the nature of the universe.

“It is an honor to be entrusted with leading a project that will allow us to gather more data in shorter timeframes with increased design luminosity,” Hadavand said. “A long-term, high-powered project such as this can lead us to physics beyond the Standard Model and potentially help us understand the components that make up our universe. It is a major accomplishment to have UTA represented on this stage.”

The ATLAS experiment dates back to 1992 and is supported by 35 U.S. institutions, most of which have been involved from the beginning. Thirty-five U.S. managers are overseeing the current upgrade work, including Hadavand, who joined the project in 2015. She is one of only three female managers.

Her work on the upgrade has been funded by the National Science Foundation and promises to contribute $1.1 million to UTA’s research expenditures over the next three years, with a total of $1.7 million for the entire six-year project.

The ATLAS detector is a many-layered instrument that weighs as much as the Eiffel Tower. It consists of six different detecting subsystems that record the trajectory, momentum and energy of particles, allowing them to be individually identified and measured.

Hadavand is specifically overseeing an upgrade to the Tile Hadronic Calorimeter (TileCal), which samples the energy of hadrons–particles that contain quarks, such as protons and neutrons–as they interact with atomic nuclei. She is leading the construction of a new power supply for the TileCal, which has been a pinch point for the project in the past.

“A glitch in the power system for the TileCal has previously caused the system to reset itself and lose important data,” Hadavand said. “We’ve done a complete redesign of the power supply with the pressure that it must run reliably and robustly when the detector comes online in six years. The TileCal is vital for the measurement of matter that cannot be seen, known as dark matter, which makes up about 27% of our universe.”

Hadavand also determined that current power supplies would not survive until the end of the High Luminosity LHC era due to radiation damage. This launched a new endeavor spearheaded by the UTA research group to test the power supplies under higher radiation dosages. The team has subsequently redesigned them to ensure they will perform reliably until the upgrade comes online in 2027.

“The fact that Dr. Hadavand was put in charge of establishing and supervising the research team engaged in such a critical aspect of one of the most important experiments in physics today demonstrates the high regard in which she and other members of the UTA physics faculty are held,” said Alex Weiss, chair of the UTA Department of Physics. “I look forward to what this group will achieve through their continued efforts.”

Predicting autism risk may begin with a drop of blood