Physicists at the University of Bonn have experimentally proven that an important theorem of statistical physics applies to so-called “Bose-Einstein condensates.” Their results now make it possible to measure certain properties of the quantum “superparticles” and deduce system characteristics that would otherwise be difficult to observe. The study has now been published in Physical Review Letters. 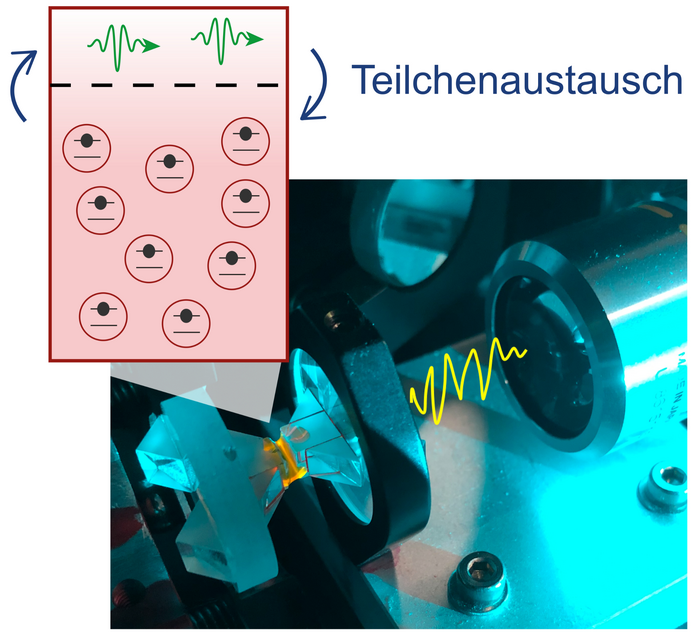 Physicists at the University of Bonn have experimentally proven that an important theorem of statistical physics applies to so-called “Bose-Einstein condensates.” Their results now make it possible to measure certain properties of the quantum “superparticles” and deduce system characteristics that would otherwise be difficult to observe. The study has now been published in Physical Review Letters.

Suppose in front of you there is a container filled with an unknown liquid. Your goal is to find out by how much the particles in it (atoms or molecules) move back and forth randomly due to their thermal energy. However, you do not have a microscope with which you could visualize these position fluctuations known as “Brownian motion”.

It turns out you do not need that at all: You can also simply tie an object to a string and pull it through the liquid. The more force you have to apply, the more viscous your liquid. And the more viscous it is, the lesser the particles in the liquid change their position on average. The viscosity at a given temperature can therefore be used to predict the extent of the fluctuations.

The physical law that describes this fundamental relationship is the fluctuation-dissipation theorem. In simple words, it states: The greater the force you need to apply to perturb a system from the outside, the less it will also fluctuate randomly (i.e., statistically) on its own if you leave it alone. “We have now confirmed the validity of the theorem for a special group of quantum systems for the first time: the Bose-Einstein condensates,” explains Dr. Julian Schmitt from the Institute of Applied Physics at the University of Bonn.

“Super photons” made of thousands of light particles

Bose-Einstein condensates are exotic forms of matter that can arise due to a quantum mechanical effect: Under certain conditions, particles, be they atoms, molecules, or even photons (particles that constitute light), become indistinguishable. Many hundreds or thousands of them merge into a single “super particle” – the Bose-Einstein condensate (BEC).

In a liquid at finite temperature, molecules move back and forth at random. The warmer the liquid, the more pronounced are these thermal fluctuations. Bose-Einstein condensates can also fluctuate: The number of condensed particles varies. And this fluctuation also increases with rising temperature. “If the fluctuation-dissipation theorem applies to BECs, the greater the fluctuation in their particle number, the more sensitively they should respond to an external perturbation,” Schmitt stresses. “Unfortunately, the number fluctuations in the usually studied BECs in ultracold atomic gases is too small to test this relationship.”

However, the research group of Prof. Dr. Martin Weitz, within which Schmitt is a junior research group leader, works with Bose-Einstein condensates made of photons. And for this system, the limitation does not apply. “We make the photons in our BECs interact with dye molecules,” explains the physicist, who recently won a highly endowed prize for young scientists from the European Union, known as an ERC Starting Grant. When photons interact with dye molecules, it frequently happens that a molecule “swallows” a photon. The dye thereby becomes energetically excited. It can later release this excitation energy by “spitting out” a photon.

“Due to the contact to the dye molecules, the number of photons in our BECs shows large statistical fluctuations,” says the physicist. In addition, the researchers can precisely control the strength of this variation: In the experiment, the photons are trapped between two mirrors, where they are reflected back and forth in a ping-pong game manner. The distance between the mirrors can be varied. The larger it becomes, the lower the energy of the photons. Since low-energy photons are less likely to excite a dye molecule (so they are swallowed less often), the number of condensed light particles now fluctuates much less.

The Bonn physicists now investigated how the extent of the fluctuation is related to the “response” of the BEC. If the fluctuation-dissipation theorem holds, this sensitivity should decrease as fluctuation decreases. “In fact, we were able to confirm this effect in our experiments,” emphasizes Schmitt, who is also a member of the Transdisciplinary Research Area (TRA) “Matter” at the University of Bonn and the Cluster of Excellence “ML4Q – Matter and Light for Quantum Computing.” As with liquids, it is now possible to infer the microscopic properties of Bose-Einstein condensates from macroscopic response parameters that can be more easily measured. “This opens a way to new applications, such as the precise temperature determination in complex photonic systems,” says Schmitt.

The project was funded by the German Research Foundation (DFG), as part of the EU project “Photons for Quantum Simulation”, and the German Federal Ministry of Economic Affairs and Climate Action (BMWK).

Fluctuation-Dissipation Relation for a Bose-Einstein Condensate of Photons.