Phantom sensations: When the sense of touch deceives

Study by researchers at Bielefeld University, University of Hamburg, and New York University 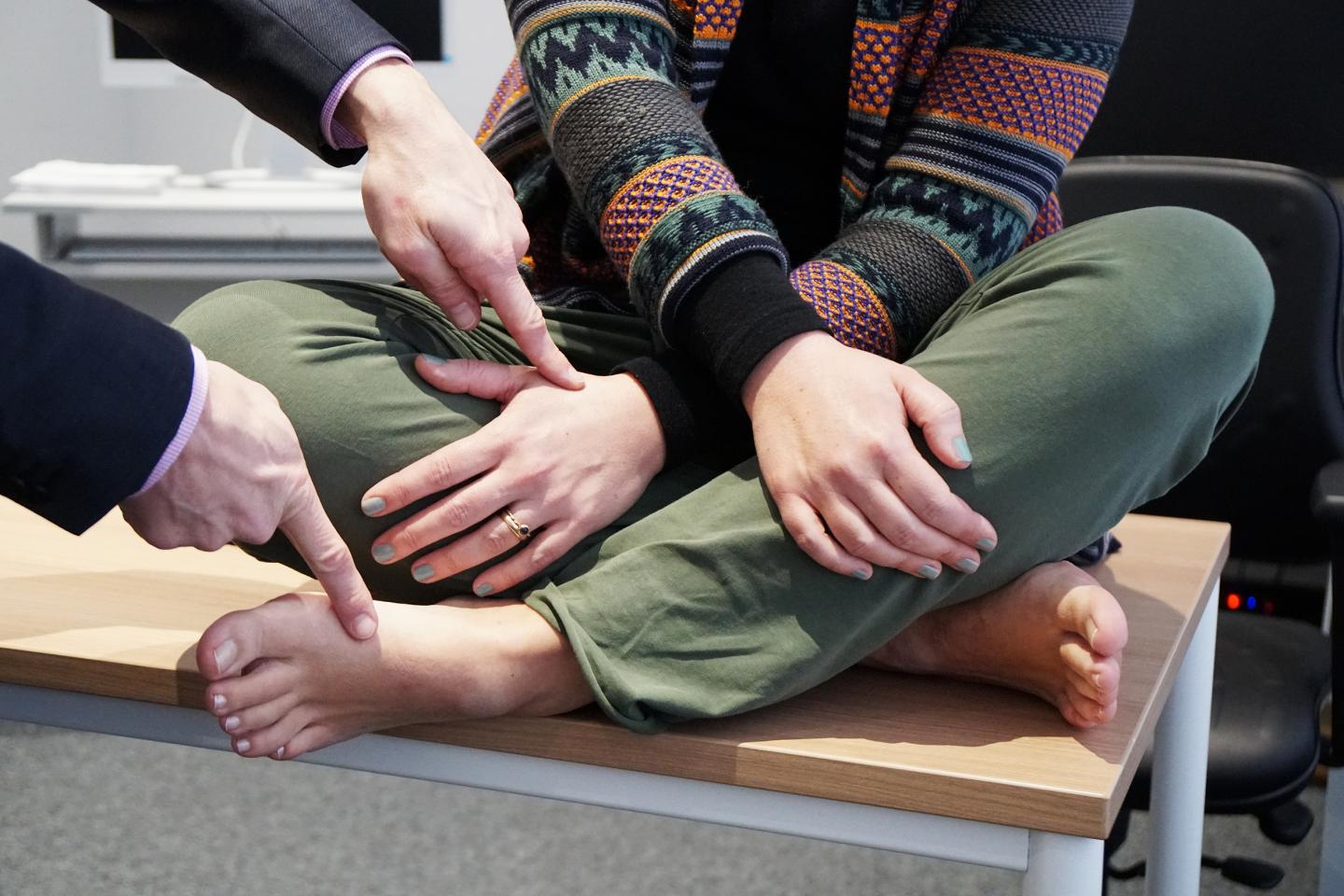 Without being aware of it, people sometimes wrongly perceive tactile sensations. A new study in the scientific journal “Current Biology” shows how healthy people can sometimes misattribute touch to the wrong side of their body, or even to a completely wrong part of the body. The study was conducted by researchers at Bielefeld University’s Cluster of Excellence CITEC, the University of Hamburg, and New York University.

“The limitations of the previous explanations for how and where our brain processes touch become apparent when it comes to individuals who have had parts of their bodies amputated or suffer from neurological diseases,” says Professor Dr. Tobias Heed, one of the authors of the study. His research group “Biopsychology and Cognitive Neuroscience” is part of CITEC and the Department of Psychology at Bielefeld University. “People who have had a hand or a leg amputated often report phantom sensations in these limbs. But where exactly does this false perception come from?”

To begin answering this question, Heed, working together with Dr. Stephanie Badde (New York University, USA) and Professor Dr. Brigitte Röder (University of Hamburg), studied whether phantom sensations could also be found in healthy people. “In doing so, we showed that healthy adults actually did systematically misattribute touch on the hands to the feet, and vice versa,” says Heed.

In the brain, neighboring neurons respond to corresponding parts of the skin. “Previously, scientists thought that our conscious perception of where a touch occurred stems from a topographical map in the brain. Following this assumption, parts of the body such as the hands, feet, or the face are represented on this map. Our new findings, however, demonstrate that other characteristics of touch are also used to attribute a touch to parts of the body,” says Heed. He refers to the presumed “map” as an anatomical system of reference. Previously, it was also believed that spatial perception had an influence on the processing of touch, meaning where a touch takes place in spatial terms, such as to the left, in front of, or below, as Heed explains. Many previous findings were interpreted such that the brain was probably using this other map, which is referred to as an external reference system.

“When parts of the body are positioned on the other side of the body than they usually are – for example, when crossing your legs – the two coordinate systems come into conflict.” The external coordinate system then locates, for instance, the left leg as being on the right side – and this does not conform what is stored in the brain about the side of the body that the leg belongs to. “In our study, our initial goal was to sort out the role of the brain’s anatomical perception as well as the impact of spatial perception,” says Heed.

For the experiments, tactile stimulators were affixed to each of the study participants’ hands and feet. These stimulators could generate a sensation on the skin. Using this impulse generator, the researchers then quickly touched the test subjects successively on two different parts of the body, such as on the left foot and the left hand. In the next step, the participants said or showed where they felt the first touch. This process was then repeated several hundred times on each test subject. In some instances, the study participants had to cross their feet or their hands, while at other times their limbs remained in their normal positions. “Remarkably, in 8% of all cases, subjects attributed the first touch to a part of the body that had not even been touched – this is a kind of phantom sensation,” explains Stephanie Badde, the study’s lead author.

The previous conception – that the attributed location of touch on the body depends on “maps” of the body – cannot explain these new findings. We show that phantom sensations depend on three characteristics,” says Tobias Heed. “The most important is the identity of the limb – whether we’re dealing with a hand or a foot. This is why a touch on one hand is often perceived on the other hand.”

The second most-important factor is the side of the body where the touched limb belongs to, which explains why a touch on the left foot can sometimes erroneously be felt on the left hand.

The findings from this study shed new light on the way in which the brain represents our own body. “The findings could be used, for instance, to drive forward new research on the genesis of phantom pain,” says Tobias Heed. “Developments using touch in artificial systems are currently based on the firm assumption that the issue of touch should be able to be solved by using one or multiple maps. But it might be that other processing principles are more efficient for some types of behavior.”

A new parallel strategy for tackling turbulence on Summit

New hypothesis links habitat loss and the global emergence of…