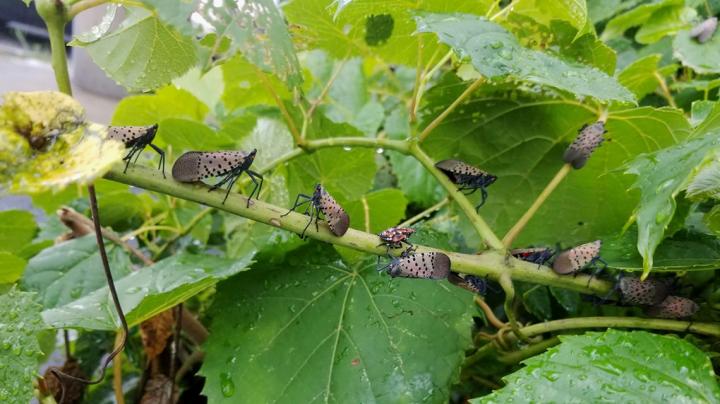 The spotted lanternfly feeds on more than 70 plant species, including grape vines and apple trees.

Now, the paper, “A pair of native fungal pathogens drives decline of a new invasive herbivore,” led by Eric Clifton, a postdoctoral researcher in the lab of Cornell professor of entomology and co-author Ann Hajek, describes how two unrelated fungi – Batkoa major and Beauveria bassiana – have been decimating spotted lanternfly populations near Reading, Pennsylvania.

“The finding is important because these naturally-occurring pathogens could be used to develop methods for more environmentally-friendly control of this damaging invader,” Hajek said.

“It’s a great example of how a major new invasive herbivore can be suppressed by native pathogens,” Clifton said. “Nobody stepped in to do this; it all happened naturally.”

In late 2017 Clifton and Hajek began responding to reports of fungi killing the insects in Berks County, Pennsylvania. In early October 2018, they investigated a site near an apple orchard. “It was clear anywhere you walked, you’d see dozens of lanternflies killed by Beauveria on the ground, and then you’d see cadavers all over the trees killed by Batkoa,” Clifton said.

Louela Castrillo, an entomologist at the United States Department of Agriculture (USDA) Agricultural Research Service on Cornell’s campus, and Andrii Gryganskyi, a molecular biologist at L.F. Lambert Spawn Co., are co-authors of the study.

The study was funded by the USDA.

Do you smell what I smell?

Insilico to present at the 2019 Africa Health Conference

ALS gene may be a hitchhiker’s guide to the neuron