Is it possible for a deterministic system to be unpredictable? Although counter-intuitive, the answer is yes. Such systems are called “chaotic systems,” which are characterized by sensitive dependence on initial conditions and long-term unpredictability. The behavior of such systems is often described using what is known as a “chaotic map.” Chaotic maps finds applications in areas such as algorithm design, data analysis, and numerical simulations. 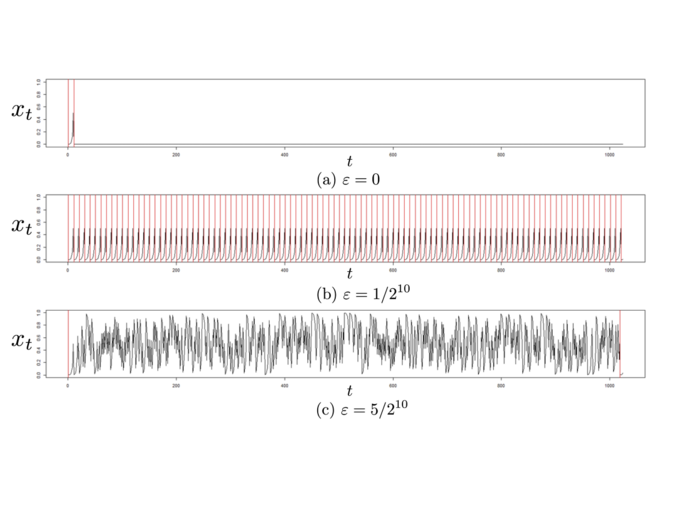 Is it possible for a deterministic system to be unpredictable? Although counter-intuitive, the answer is yes. Such systems are called “chaotic systems,” which are characterized by sensitive dependence on initial conditions and long-term unpredictability. The behavior of such systems is often described using what is known as a “chaotic map.” Chaotic maps finds applications in areas such as algorithm design, data analysis, and numerical simulations.

To this end, perturbation methods are an effective strategy where a disturbance is applied to the state of the Bernoulli shift map to prevent its output from converging. However, the choice of parameters for obtaining suitable perturbations lacks a theoretical underpinning.

In a recent study made available online on October 21, 2022 and published in Volume 165, Part 1 of the journal Chaos, Solitons & Fractals on December 2022, Professor Tohru Ikeguchi from the Tokyo University of Science in association with Dr. Noriyoshi Sukegawa from University of Tsukuba, both in Japan, have now addressed this issue, laying the theoretical foundations for effective parameter tuning. “While numerical simulations can tell us which values of the parameters can prevent convergence, there is no theoretical background for choosing these values. In this paper, we aimed to investigate the theoretical support behind this choice,” explains Prof. Ikeguchi.

Accordingly, the researchers made use of modular arithmetic to tune a dominant parameter in the perturbation method. In particular, they defined the best value for the parameter, which depended on the bit length specified in implementations. The team further analyzed the output period for which the parameter had the best value. Their findings showed that the resulting periods came close to the trivial theoretical upper bounds. Based on this, the researchers obtained a complete list of the best parameter values for a successful implementation of the Bernoulli shift map.

Additionally, an interesting consequence of their investigation was its relation to Artin’s conjecture on primitive roots, an open question in number theory. The researchers suggested that, provided Artin’s conjecture were true, their approach would be theoretically guaranteed to be effective for any bit length.

Overall, the theoretical foundations put forth in this research are of paramount importance in the practical applications of chaotic maps in general. “A notable advantage of our approach is that it provides a theoretical support to the choice of best parameters. In addition, our analysis can also be partially applied to other chaotic maps, such as the tent map and the logistic map,” highlights Dr. Sukegawa.

With distinct advantages, such as simplicity and ease of implementation, the Bernoulli shift maps is highly desirable in several practical applications. And, as this study shows, sometimes chaos is preferable to order!

With a mission of “Creating science and technology for the harmonious development of nature, human beings, and society,” TUS has undertaken a wide range of research from basic to applied science. TUS has embraced a multidisciplinary approach to research and undertaken intensive study in some of today’s most vital fields. TUS is a meritocracy where the best in science is recognized and nurtured. It is the only private university in Japan that has produced a Nobel Prize winner and the only private university in Asia to produce Nobel Prize winners within the natural sciences field.

About Professor Tohru Ikeguchi from Tokyo University of Science
Tohru Ikeguchi received his B.E., M.E., and D. E. degrees from Tokyo University of Science (TUS), Japan. After working for nearly a decade as a Full Professor at Saitama University, Japan, he joined TUS as a Full Professor at the Department of Management Science and worked there from 2014 to 2016. Since then, he has been a Full Professor at the Department of Information and Computer Technology in TUS. His research interests include nonlinear time series analysis, computational neuroscience, application of chaotic dynamics to solving combinatorial optimization problems, and complex network theory. He has published over 230 papers and proceedings and refereed over 140 papers and proceedings.

How to Perturb Bernoulli Shift Map