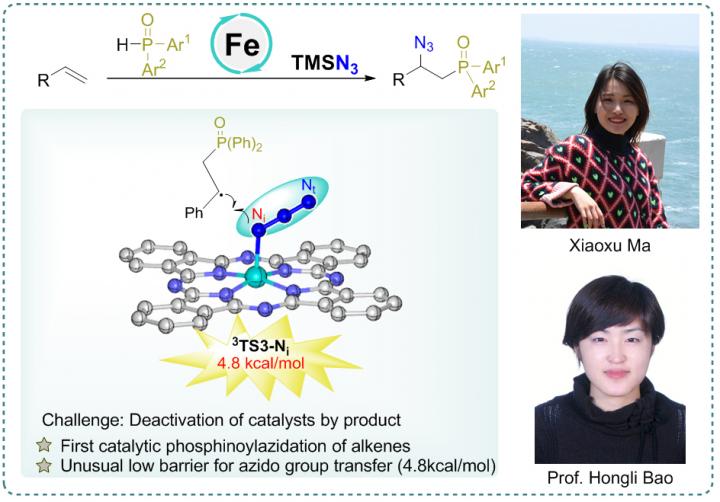 Phosphinoylazidation of alkenes is a direct method to build nitrogen- and phosphorus-containing compounds from feedstock chemicals. Notwithstanding the advances in other phosphinyl radical related difunctionalization of alkenes, catalytic phosphinoylazidation of alkenes has not yet been reported. Thus, efficient access to organic nitrogen and phosphorus compounds, and making the azido group transfer more feasible to further render this step more competitive remain challenging.

Recently, a research team led by Prof. Hongli Bao from Fujian Institute of Research on the Structure of Matter, Chinese Academy of Sciences (CAS) reported the first iron-catalyzed phosphinoylazidation of alkenes under relatively mild reaction conditions affording the nitrogen- and phosphorus- containing compounds, which was disclosed with the unusually low activation energy 4.8 kcal/mol of radical azido group transfer from the PcFeIIIN3 to benzylic radical. The results were published in Chinese Journal of Catalysis.

Fe(OTf)2 is a good catalyst for carboazidation of alkenes in the previous work reported by Bao’s group. However, it is not the efficient catalyst for the phosphinoylazidation reaction. The reason for this result could presumably be the deactivation of the iron catalyst by the coordinative product, azidophosphonates. Therefore, the catalyst iron(II) phthalocyanine (PcFeII) which has a tetradentate ligand was chosen because it presumably can maximally evade the deactivation of its iron center, and, fortunately, the results confirmed the authors’ hypothesis with the yield of desired products up to 88%.

Mechanism experiments and density functional theory (DFT) calculations were also conducted to further investigate the reaction mechanism. Two radical clock experiments with different rate and radical trapping experiments have confirmed the radical nature of the reaction. Furthermore, the signal of PcFeIIIOH and PcFeIIIN3 were observed in mass spectrometry experiments. Theoretical study was then conducted based upon the experimental results. The results support the mechanism of iron-catalyzed azidation which is via the group transfer pathway rather than the reductive elimination from high-valent species. The azido transfer from PcFe(N3) to benzylic radical has the lowest energy transition state with an energy barrier of only 4.8 kcal/mol. This work may inspire other in-depth mechanism studies of metal catalyzed radical reactions and spur further synthetic applications.

Chinese Journal of Catalysis is co-sponsored by Dalian Institute of Chemical Physics, Chinese Academy of Sciences and Chinese Chemical Society, and it is currently published by Elsevier group. This monthly journal publishes in English timely contributions of original and rigorously reviewed manuscripts covering all areas of catalysis. The journal publishes Reviews, Accounts, Communications, Articles, Highlights, Perspectives, and Viewpoints of highly scientific values that help understanding and defining of new concepts in both fundamental issues and practical applications of catalysis. Chinese Journal of Catalysis ranks among the top six journals in Applied Chemistry with a current SCI impact factor of 8.271. The Editors-in-Chief are Profs. Can Li and Tao Zhang.