Paving the way for metastasis 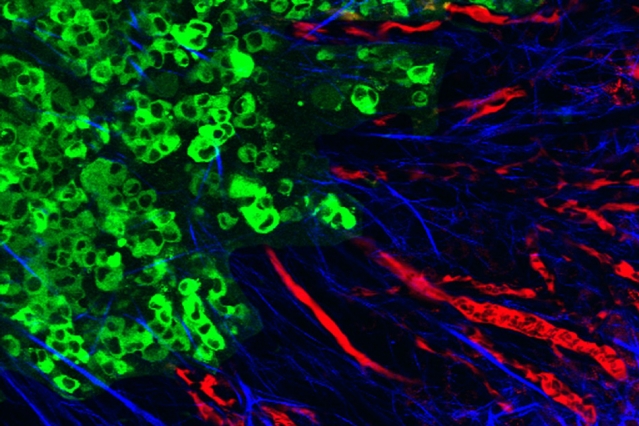 A new study from MIT reveals how cancer cells take some of their first steps away from their original tumor sites. This spread, known as metastasis, is responsible for 90 percent of cancer deaths.

Studying mice, the researchers found that cancer cells with a particular version of the Mena protein, called MenaINV (invasive), are able to remodel their environment to make it easier for them to migrate into blood vessels and spread through the body. They also showed that high levels of this protein are correlated with metastasis and earlier deaths among breast cancer patients.

Finding a way to block this protein could help to prevent metastasis, says Frank Gertler, an MIT professor of biology and a member of the Koch Institute for Integrative Cancer Research.

“That’s something that I think would be very promising, because we know that when we genetically remove MenaINV, the tumors become nonmetastatic,” says Gertler, who is the senior author of a paper describing the findings in the journal Cancer Discovery.

For cancer cells to metastasize, they must first become mobile and then crawl through the surrounding tissue to reach a blood vessel. In the new study, the MIT team found that cancer cells follow the trail of fibronectin, a protein that is part of the “extracellular matrix” that provides support for surrounding cells. Fibronectin is found in particularly high concentrations around the edges of tumors and near blood vessels.

“Cancer cells within a tumor environment are constantly faced with differences in fibronectin concentrations, and they need to be able to move from low to high concentrations to reach the blood vessels,” Oudin says.

MenaINV, an alternative form of the normal Mena protein, is key to this process. MenaINV includes a segment not found in the normal version, and this makes it bind more strongly to a receptor known as alpha-5 integrin, which is found on the surfaces of tumor cells and nearby supporting cells, and recognizes fibronectin.

When MenaINV attaches to this receptor, it promotes the binding of fibronectin to the same receptors. Fibronectin is normally a tangled protein, but when it binds to cell surfaces, it gets stretched out into long bundles. This stimulates the organization of collagen, another extracellular matrix protein, into stiff fibrils that radiate from the edges of the tumor.

This pattern, which is typically seen in tumors that are more aggressive, essentially paves the way for tumor cells to move toward blood vessels.

“If you have curly, coiled collagen, that’s associated with a good outcome, but if it gets realigned into these really straight long fibers, that provides highways for these cells to migrate on,” Oudin says.

The researchers also looked at data from breast cancer patients and found that high levels of MenaINV and fibronectin are associated with metastasis and earlier death. However, there was no link between the normal version of Mena and earlier death.

Gertler’s lab had previously developed antibodies that can detect the normal and invasive forms of Mena, which are now being developed for testing patient biopsy samples. Such tests could help doctors to determine whether a patient’s tumor is likely to spread or not, and possibly to guide the patient’s treatment. In addition, scientists may be able to develop drugs that inhibit MenaINV, which could be useful for treating cancer or preventing it from metastasizing.

The researchers now hope to study how MenaINV may contribute to other types of cancers. Preliminary studies suggest that it plays a similar role in lung and colon cancers as that seen in breast cancer. They are also investigating how the choice between the two forms of the Mena protein is regulated, and how other proteins found in the extracellular matrix might contribute to cancer cell migration.