Patterns of Greenland ice loss similar to 20 thousand years ago 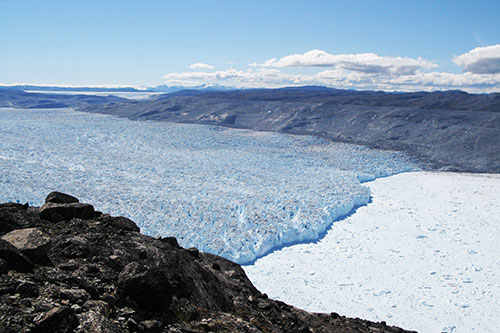 A new study based on GPS measurements of the Earth’s crust suggests that previous calculations of past and present-day mass loss in the Greenland Ice Sheet may have been underestimated.

The latest observations, reported in the journal Science Advances today, reveal that the entirety of Greenland is rising in response to a combination of Glacial Isostatic Adjustment (that is the rise of land due to ice mass loss over the last ~23 thousands years) and the Earth’s immediate elastic response to present-day ice-mass loss.

Mass loss of the Greenland Ice Sheet, the world’s second largest ice sheet, has increased dramatically over the last two decades, due to accelerated glacier flow and enhanced surface melting.

Scientists have historically found it hard to provide precise measurements of exactly how much the ice sheet has melted over a millennial time scale, and therefore how much it was contributing to global sea level rise over those time scales.

Earlier studies suggest that the basins of the southeast, east and northwest of the ice sheet have undergone profound change, contributing more than 77 per cent of the total ice loss to the ocean over the last century, specifically between 1900 and 1981.

Using data from the Greenland GPS Network, a team of researchers including scientists from the Technical University of Denmark (DTU) and the University of Bristol, recently found that these regions actually contributed about 40 per cent to ice mass loss over thousands of years.

Lead author Professor Shfaqat Abbas Khan from DTU, and colleagues, measured the rise of land masses that were once weighed down by ice sheets, known as Glacial Isostatic Adjustment (GIA). They found large GIA uplift rates of over 12 millimeters per year in southeast Greenland.

The results indicate that these basins alone have contributed to an ice mass loss corresponding to global sea level rise of 1.5 m.

Co-author Professor Jonathan Bamber from the University of Bristol’s School of Geographical Sciences, said: "It's notoriously difficult to estimate the long term past contribution of Greenland to sea level rise. Our new results provide a unique insight into the millennial timescale contribution of the ice sheet. We find a remarkable similarity between how the ice sheet behaved in the past and what it is doing now, with potential implications for future mass loss trends."

Professor Khan added: “It seems likely, therefore, that further destabilization of these ice sheet regions will continue to be the source of Greenland’s contribution to sea-level rise in the future.”