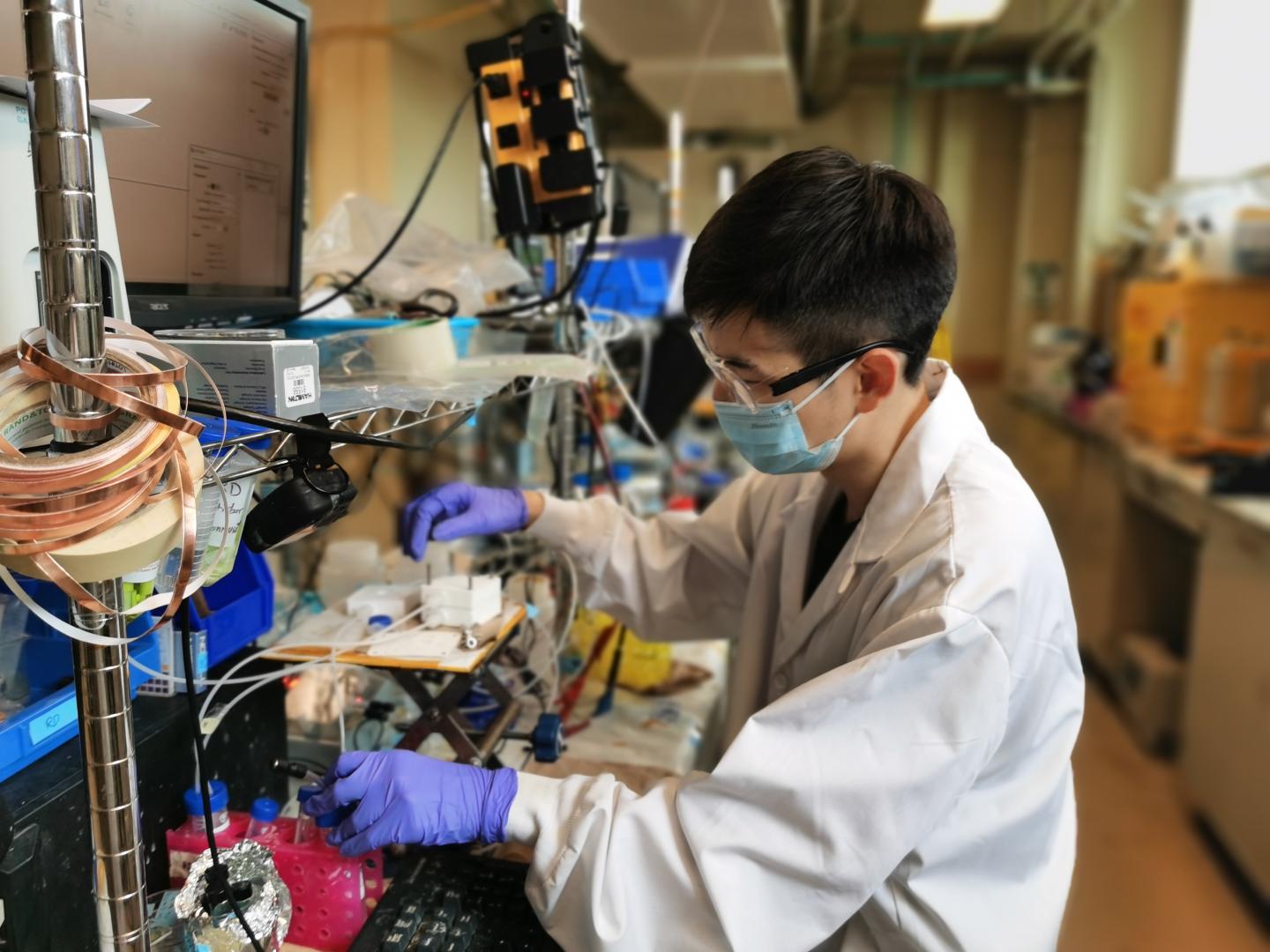 Researchers from University of Toronto Engineering have developed an improved electrochemical system that raises the value of captured CO2 by converting more of it into valuable products than ever before.

The International Energy Agency recently cited carbon capture and storage as one of the strategies that can help keep global emissions low enough to limit global warming to 1.5 C by 2050. But captured carbon currently has little economic value, reducing the incentive for companies to invest in this technology.

A University of Toronto Engineering team led by Professor Ted Sargent is addressing this challenge by designing advanced electrolyzers that use electricity to convert captured CO2 into the petrochemical building blocks of common everyday materials, from plastic to lycra. This helps create a market for captured carbon, while also providing a low-carbon alternative to the fossil fuel-based manufacturing processes in use today.

Unlike previous systems, the team’s latest design can be run under strongly acidic conditions, which reduces undesired side reactions and enhances overall efficiency.

“In previous systems, you had to choose whether to focus on efficient use of electricity, or efficient use of carbon,” says Sargent, senior author of a new paper published today in Science. “Our team used a new catalyst design inside the electrolyzer to consume a large fraction of the input carbon, while keeping good productivity towards desirable high-value products.”

In the electrolyzer, captured CO2 is dissolved in a liquid electrolyte, which flows over the solid catalyst through which the electricity is supplied.

“What we want is for the dissolved CO2 in the reactor to absorb electrons and get converted into ethylene and other products,” says PhD candidate Jianan Erick Huang, one of three co-lead authors on the new paper along with fellow PhD candidate Adnan Ozden and postdoctoral fellow Fengwang Li, who is now continuing similar research at the University of Sydney.

“But, in prior reports which operated at high pH — meaning alkaline or neutral conditions — most of the CO2 is wasted, because it gets converted into carbonate instead.”

Huang says that while the carbonate can be extracted, converted into CO2 and fed back into the electrolyzer, doing so is energetically costly. The team’s calculations show that more than half of the energy consumed by the overall system would be spent on recycling the carbonate in this way.

Running the electrolyzer under low pH, or acidic conditions, prevents the formation of carbonate, but it introduces a different problem: now the more favourable reaction is hydrogen evolution. This means that hydrogen ions (i.e., protons) in the acidic solution absorb electrons and get converted to hydrogen gas, leaving few electrons available to combine with CO2.

Huang and the team dealt with this problem using two strategies in combination. First, under acidic conditions, they increased the current density, flooding the reactor with electrons. Hydrogen ions rushed in to react with them, but they got caught in a molecular traffic jam — the technical term is mass transport limitation.

“In effect, we’re creating a reactor that is acidic throughout, except for a tiny layer within less than 50 micrometres of the catalyst surface,” says Huang. “In that specific region, it is not acidic, in fact it’s slightly alkaline. There, CO2 can get reduced to ethylene by those electrons.”

The next step was to add a positively charged ion, in this case potassium, to the reaction. This created an electric field near the catalyst that made it easier for CO2 to adsorb to the surface, giving it the edge in the competition with the hydrogen.

The two changes made a big difference. Previous systems had typically utilized less than 15% of the available carbon, losing the rest to carbonate. The new system utilizes about 77% of available carbon, with more than 50% being converted to multi-carbon products such as ethylene and ethanol. (The other 27% goes to single-carbon products such as carbon monoxide and formic acid.)

“This breakthrough helps pave the way forward to an economically viable?future for CO2 utilization?even with high CO2 capture costs today,” says Dr. Philip Llewellyn, Carbon Capture and Utilization (CCUS) Manager for TOTAL SE, which provided financial support for the research. “When one further considers the projected?increases in carbon tax needed?to meet global climate targets, this represents a significant acceleration in the time-to-market and time-to-climate impact for CO2 electrolyzers.”

There are still hurdles to be overcome before this system can be scaled up to an industrial level, including the stability of the catalyst when its size is increased and the need for even further energy savings. Still, Huang is proud of what the team has accomplished.

“By creating a reactor that is acidic in one place and alkaline in another, we’ve broken a theoretical limit,” he says. “We don’t have to choose between carbon efficiency and electron efficiency: we can optimize both to get the best overall system. It’s going to be challenging, but I think now it’s doable.”