Passing aircraft wring extra snow and rain out of clouds 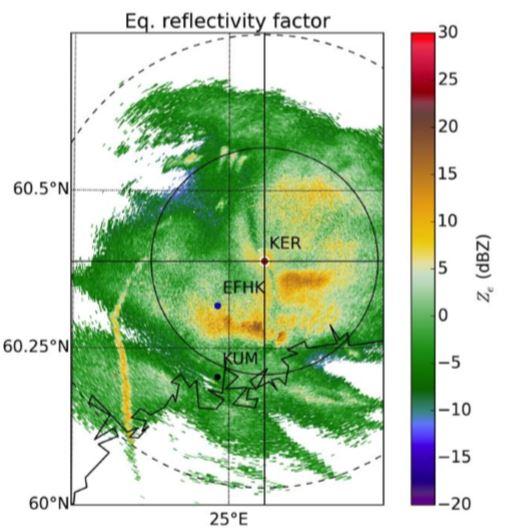 WASHINGTON–Planes flying over rain or snow can intensify the precipitation by as much as 10-fold, according to a new study.

The rain- and snow-bursts are not caused by emissions from the aircraft but are the peculiar consequence of the aircrafts’ wings passing though clouds of supercooled water droplets in cloud layers above a layer of active rain or snow.

Under the right conditions, this effect can boost rain and snow storms over airports, where many planes intersect the cloud layer on approach and descent.

“The interesting thing about this feature is that it is caused by aircraft, but it is not caused by pollution,” said Dimitri Moisseev, a researcher at the University of Helsinki and the Finnish Meteorological Institute and the lead author of the new study in AGU’s Journal of Geophysical Research: Atmospheres. “Even if there would be absolutely ecological airplanes, which don’t have any combustion, no fuel or anything, it would still happen.”

Although the bands of enhanced precipitation are artificially created, the physical process jump-started by the passage of planes can occur naturally, which makes them useful laboratories for studying the formation of precipitation, according to Moisseev. Observing them may help meteorologists “nowcast” natural rain and snow conditions 2 to 6 hours into the future, which is essential for airport operations.

“When you, like myself, look at the radar data every day there is always something interesting going on,” Moisseev said. “Surprisingly enough, there’s always new things that we cannot explain still.”

Moisseev discovered curious streamers of heightened precipitation in scans from the campus radar antenna at the University of Helsinki Kumpula. The unnaturally straight patches of intense precipitation appeared against a background of lighter rain or snow and seemed to bend toward the nearby Helsinki-Vantaa airport.

Their shapes looked intriguingly like the inverse of cloud formations known as fallstreaks, hole-punch or canal clouds, phenomena which can occur when aircraft fly through clouds of water droplets that are colder than 0 degrees Celsius (32 degrees Fahrenheit) –but aren’t freezing.

The new study demonstrates that a similar phenomenon can enhance or elicit rain or snowfall from cloud layers underlying these supercooled cloud layers.

Both tiny water droplets and ice crystals form clouds. Pure water can stay liquid down to -40 degrees Celsius (-40 degrees Fahrenheit) without dust particles or other suitable surfaces present to seed crystallization into ice. So water droplets that condense into clouds can be much colder than the typical freezing point of 0 degrees Celsius (32 degrees Fahrenheit). Such supercooled liquid clouds are common in low- to mid-level cloud layers.

Air pressure changes from passing aircraft can trigger these supercooled water droplets to freeze into ice crystals. Air expands abruptly in the wake of wing and propeller tips, causing a dramatic local drop in pressure and temperature. Inside a cloud of water droplets that is already supercooled between -15 to -20 degrees Celsius (5 to -4 degrees Fahrenheit), the passing aircraft can drop the temperature below -40 degrees Celsius (-40 degrees Fahrenheit) and instigate the formation of ice crystals.

The new ice crystals help freeze more supercool water droplets, setting off a chain reaction of crystal formation in a widening circle around the path of the aircraft. When the crystals fall, they create holes or streaks of clear air in the cloud, sometimes opening a window of blue sky if the cloud layer is thin. In most cases, the ice crystals evaporate before they reach the ground.

Meteorologists have known that passing aircraft can freeze water droplets into ice crystals and previous work had suggested that the process could enhance rain and snow in underlying clouds, but the effect had not been captured in detail.

Andrew Heymsfield, a senior scientist at the National Center for Atmospheric Research’s Mesoscale and Microscale Meteorology Laboratory in Boulder, Colorado, and a researcher unaffiliated with the new study, had noted the potential for inadvertent seeding of supercooled clouds over airports in a previous paper about the formation and spread of aircraft-induced holes in clouds. He observed similar arcs of heightened snowfall in radar data collected near Denver, Colorado’s former Stapleton Airport in 1992.

“We know that planes can trigger precipitation. The authors of this study have a lot of cases, with wonderful data from ground-based instruments–radar, lidar–good information about particle size and concentration, and radiosonde data to show the likely temperature for formation,” Heymsfield said. “They succeeded in documenting the phenomenon.”

To find out if the streamers of heightened precipitation could be caused by aircraft, Moisseev and his colleagues reviewed 11 years of the University of Helsinki’s weather radar data and found 17 days with repeat cases of the characteristic linear streamers between December 2008 and January 2018.

They examined flightpaths near the airport to see whether the streamers could be caused by passing aircraft. Flightpaths archived to 2011 confirmed aircraft passed within 2-10 kilometers (1-6 miles) of the intense precipitation streamers in most of the cases observed.

“The intensified precipitation basically follows the track of an airplane above the cloud,” Moisseev said. “It could extend over hundreds of kilometers, but the cross-section would be maybe 100 meters. So it’s a very narrow, long feature.”

The additional ice crystals raise the rate at which crystals collide to form larger snowflakes, intensifying snowfall, according to the authors.

This could happen if an airplane flies directly through a precipitating cloud, but the authors suspect something more complicated is going on, because their data locates the starting height of rain and snow enhancement far above the layer that is already precipitating.

The new study concludes the airplane-generated ice crystals most likely fall from a supercooled upper cloud layer into a lower layer that is actively raining or snowing, begetting more rain or snow from the lower cloud layer.

Satellite data support this scenario, showing a top layer of clouds composed of supercool droplets or a mix of ice and water, poised at about the right temperature to turn to ice crystals under the influence of aircraft. This upper, supercool layer floats at the typical approach altitude of planes flying into the Helsinki-Vantaa airport.

Rain and snow artificially enhanced by air traffic has useful clues for natural precipitation and the factors affecting the efficiency of formation, according to Moisseev. The streamers are accidental experiments that allow the researchers to observe the effect along the path of the aircraft, and just outside it, and ask questions the kinds of microphysical processes taking place.

The American Geophysical Union is dedicated to advancing the Earth and space sciences for the benefit of humanity through its scholarly publications, conferences, and outreach programs. AGU is a not-for-profit, professional, scientific organization representing 60,000 members in 137 countries. Join the conversation on Facebook, Twitter, YouTube, and our other social media channels.

This paper is freely available for 30 days. Journalists and public information officers (PIOs) can download a PDF copy of the article by clicking on this link:

Journalists and PIOs may also request a copy of the final paper by emailing Liza Lester at llester@agu.org. Please provide your name, the name of your publication, and your phone number.

Neither the paper nor this press release is under embargo.

Do all chemotherapies have equal long-term heart risk?

Stanford researchers have developed a gel-like fluid to prevent wildfires