Particles with ‘eyes’ allow a closer look at rotational dynamics 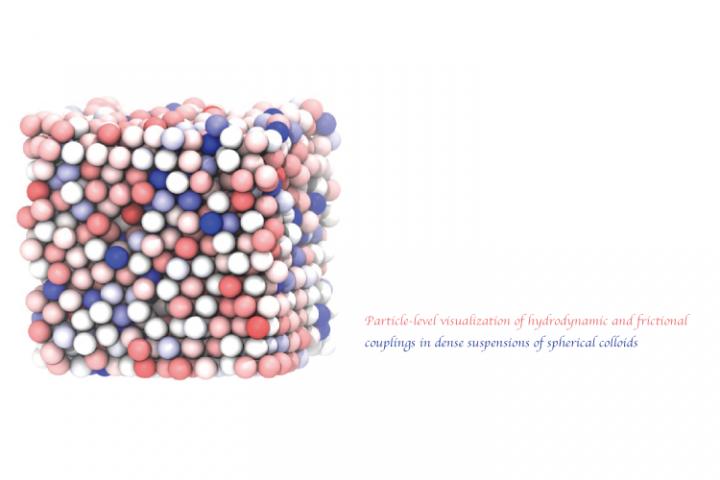 Tokyo, Japan – Colloids–mixtures of particles made from one substance, dispersed in another substance–crop up in numerous areas of everyday life, including cosmetics, food and dyes, and form important systems within our bodies. Understanding the behavior of colloids therefore has wide-ranging implications, yet investigating the rotation of spherical particles has been challenging. Now, an international team including researchers from The University of Tokyo Institute of Industrial Science has created particles with an off-center core or “eye” that can be tracked using microscopy. Their findings are published in Physical Review X.

Particles suspended in a liquid move from one place to another as a result of Brownian motion, which can be easily detected with a microscope. However, these particles also rotate, which is much more difficult to see if they are spherical.

The researchers overcame this by creating particles made from two different colors of the same material. The core sphere–which they call the eye–is set off-center at the surface of the particle. It provides a point that can be followed under a microscope to determine the orientation changes as the particle rotates.

“The rotation of a colloidal particle tells us about the surrounding hydrodynamics–the motion of the suspending liquid–and the contact forces, such as friction. However, to get the full picture in a dense suspension, all of the particles must be tracked at once,” explains study corresponding author Professor Hajime Tanaka. “As well as providing a point to track over time, the density and refractive index of our particles can be matched so that the necessary 3D images can be acquired.”

By tracking a dense suspension of charged particles forming a colloidal crystal–which has an ordered arrangement of particles–it was found that the rotation of neighboring spheres was coupled and moved in opposite directions, like meshed gears.

In addition, a system with uncharged particles showed that there was a relationship between local crystallinity–the ordering in the immediate surroundings–and the rotational diffusivity, which describes the process of the orientation regaining equilibrium.

The researchers also observed “stick-slip” rotational motion between particles that make contact, where a large neighbor could stop the motion of a particle through friction.

“Our system has provided much-needed insight into hydrodynamic and frictional coupling in very dense colloids,” says other corresponding author Professor Roel Dullens. “We expect our findings to have a significant impact on the design of industrial processes involving colloids, as well as on the understanding of biological processes.”

The article, “Particle-level visualization of hydrodynamic and frictional couplings in dense suspensions of spherical colloids”, was published in Physical Review X at DOI: 10.1103/PhysRevX.11.021056.

More than 120 research laboratories, each headed by a faculty member, comprise IIS, with more than 1,000 members including approximately 300 staff and 700 students actively engaged in education and research. Our activities cover almost all the areas of engineering disciplines. Since its foundation in 1949, IIS has worked to bridge the huge gaps that exist between academic disciplines and realworld applications.