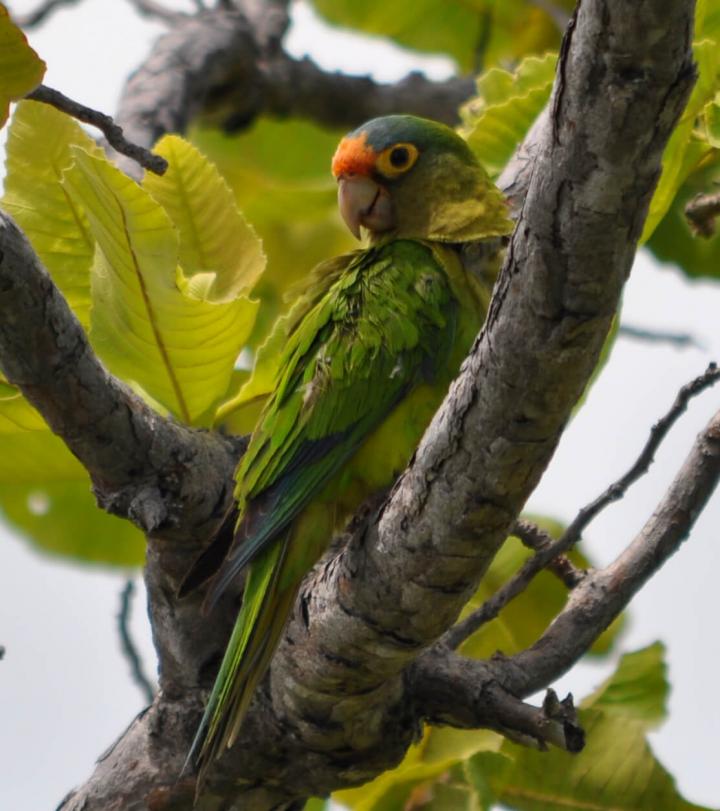 During flock encounters, a single vocal interaction seems to be sufficient for making the decision of whether to recruit an individual or flock. Parrots are known for their splendid ability to imitate, including the contact calls of other individuals during vocal interactions. Such rapid vocal matching is hypothesised to precede and mediate the formation of new flocks. But how are such interactions perceived by others?

-“By using a novel experimental design, we were able to gain valurable insights in the flock decisions of a social parrot, the orange-fronted conure (Eupsittula canicularis). We conducted a field experiment in which flocks of wild orange-fronted conures were attracted to two loudspeakers simulating two orange-fronted conures engaged in a contact call interaction. During the interaction, one simulated individual would act as the leader by calling first, followed by the other individual. We specifically tailored the playback so the contact calls of the follower would imitate those of the leader. The listening wild flocks could now decide to fly after either the leader or the follower to fuse with it”.

-“Although we do not yet know why leaders are preferred, our findings suggest that orange-fronted conure flocks rely on eavesdropping on vocal interactions to infer the relative quality of unfamiliar individuals. While orange-fronted conures frequently engage in contact call imitation during vocal interactions with conspecifics, we here illustrate that vocal imitation also has implications for potential third party listeners”: says Heidi M. Thomsen.

These birds respond selectively to interactants, indicating that contact call imitation plays an essential role in facilitating the formation and maintenance of affiliative social interactions – and not only with the individuals they directly interact with. This is a missing key to understanding the function of vocal imitation in parrots.