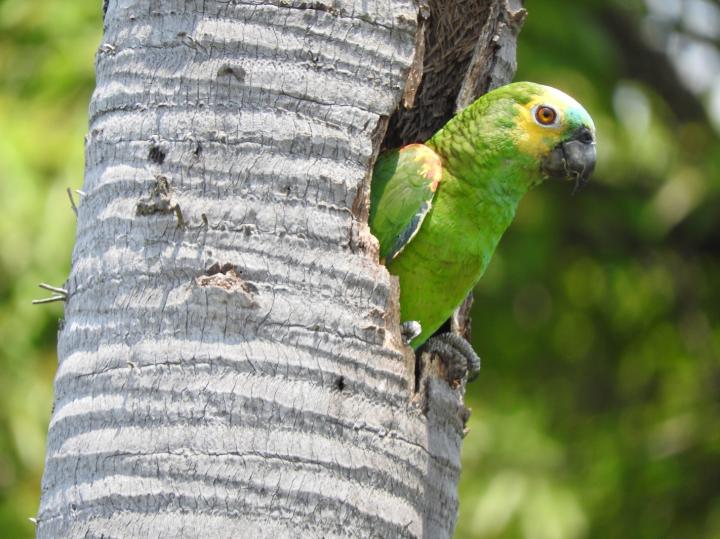 A genome analysis of traits in parrots and 26 other bird species revealed that parrots and other long-lived birds share high rates of conserved mutations in genes responsible for supporting an abnormally long lifespan for a small animal. For example, the expected lifespan for a bird of a similar size as a parrot would be in the range of 15-20 years, whereas the blue-fronted Amazon parrot (Amazona aestiva) can live up to 66 years.

“Many of these genes support telomerase activity; DNA damage repair; control of cell proliferation, cancer, and immunity; and anti-oxidative mechanisms and were previously shown to affect lifespan in worms and flies,” says co-senior author Claudio Mello, a behavioral neuroscientist at Oregon Health & Science University. “We also found a few hundred genes that have not been implicated in lifespan before, which are good candidates to study further.”

The work, appearing December 6 in the journal Current Biology, also identified several dozen parrot specific genes that may be important for their defining traits, such as their ability to imitate sounds. “We saw that regulatory elements of genes related to brain development and function had similar modifications in humans and parrots,” says Mello. “That means that some cognitive abilities may have evolved convergently in both humans and parrots.”

“Learning to imitate sounds is the basis of speech in birds and in humans as well,” says Mello. “It’s actually a very complex process, and we don’t fully understand how it happens. We know that species incapable of vocal learning will still make sounds if you deafen or isolate them from birth, because their sounds are innate. But isolate or deafen a young parrot, as has been shown in budgerigars, and it will not learn to vocalize properly.”

The analysis, co-led by Francisco Prosdocimi at the Federal University of Rio de Janeiro and Morgan Wirthlin (@morganneuro) at Oregon Health & Science University and now at Carnegie Mellon University, involved a collaborative network with several institutions in Brazil and the United States.

This research was funded through the Avian Genome Consortium grant by the Brazilian National Council for Scientific and Technological Development (CNPq/MCT), The Amazon Foundation for Research Support (FAPESPA), the Foundation for Research Support of the State of Rio de Janeiro (FAPERJ) , the Howard Hughes Medical Institute, and the The National Institute on Deafness and Other Communication Disorders/National Institutes of Health.

Current Biology (@CurrentBiology), published by Cell Press, is a bimonthly journal that features papers across all areas of biology. Current Biology strives to foster communication across fields of biology, both by publishing important findings of general interest and through highly accessible front matter for non-specialists. Visit: http://www.cell.com/current-biology. To receive Cell Press media alerts, contact press@cell.com.

Could algae that are 'poor-providers' help corals come back after bleaching?

Airborne particles can send our detox systems into overdrive