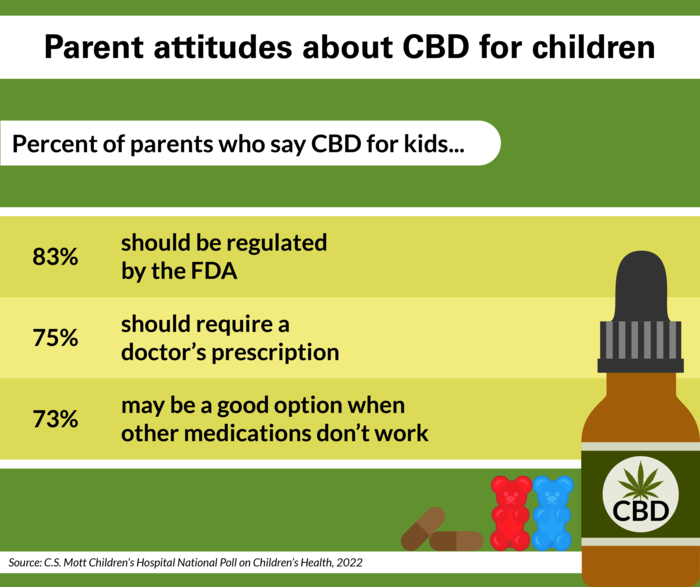 While its use is much more limited in children, some CBD products have been marketed for minors as well.

But despite the wide availability of CBD, parents have limited knowledge about it, with a third thinking it’s the same as using marijuana, suggests the University of Michigan Health C.S. Mott Children’s Hospital National Poll on Children’s Health.

And while the majority haven’t even considered having their child use a CBD product, three-quarters of parents appeared open-minded about the possibility, saying it may be a good option for medical care when other medications don’t work.

“There is very little data on how CBD may impact children’s developing brains and only certain types of situations when it’s considered for pediatric medical reasons. Still, CBD has become much more accessible and widely advertised, with some companies claiming benefits for kids,” said Mott Poll co-director Sarah Clark, M.P.H.

The nationally representative poll report is based on responses from 1,992 parents of children 3-18 years surveyed in October 2021.

Parents’ most common reasons for giving or considering CBD for their child include anxiety (51%), sleep problems (40%), attention deficit hyperactivity disorder, or ADHD, (33%), muscle pain (20%), autism (19%), and to make their child feel better in general (13%). These reasons line up with conditions some CBD products claim to help with in brochures and promotional materials.

While three quarters of parents felt CBD for children should require a doctor’s prescription, only 63% rated the recommendation of their child’s doctor as a strong factor in deciding whether to give their child a CBD product. And of the 7% of parents who say they’ve given or considered giving CBD for their child, less than a third of them say they’ve talked with their child’s health care provider about CBD use.

“Our poll suggests most parents have very limited knowledge about CBD products,” Clark said. “It’s important for parents to inform their pediatrician or other healthcare providers if they’re considering CBD use in kids so that they can discuss potential risks.”

Most parents cited side effects as the most important factor in deciding whether to give their child a CBD product. Other considerations included whether it was tested for safety in children (78%), how well it works in children (72%), recommendation of their child’s doctor (63%), approval of the U.S. Food and Drug Administration (58%), and product reviews (41%).

Most parents (71%) have never used a CBD product themselves, while 24% have tried CBD and 5% use a CBD product regularly, according to the poll report.

Many unknowns on side effects

CBD products are sold online and in stores that specialize in CBD products, as well as in supermarkets and drugstores and come in many forms, including oils, topical ointments, vaping, edibles and gummies.

The FDA has only approved one purified form of the drug substance CBD for children to treat rare seizures that don’t respond to medication. Studies have also looked at CBD use in in children with hyperactivity, anxiety, sleep problems and depression but research remains limited.

Side effects could include sleepiness, fatigue, and diarrhea, and experts have raised concerns about CBD’s potential to interact with other medications and adversely impact the liver. But since CBD products have not undergone rigorous testing for FDA approval, the rate and severity of side effects remain unclear, particularly for children.

To be legal, CBD must have less than .3% of tetrahydrocannabinol (THC), the chemical that produces most of marijuana’s psychological and “high” effects. Many manufacturers purport to contain close to 0% THC, but the lack of regulation of CBD products also raises questions about quality control in the production of various products, experts say.

“Parents who see promotional content claiming CBD benefits kids with certain conditions should be aware that products seen online or in stores are not regulated by the FDA and may be mislabeled,” Clark said. “This makes it difficult for parents to know exactly what they’re buying and what their child may be exposed to.

“Anecdotal stories of children benefiting from CBD may sound alluring but just because it’s a plant product doesn’t necessarily make it safe or effective in children. We need more evidence to understand CBD’s short- and long-term side effects in kids.”