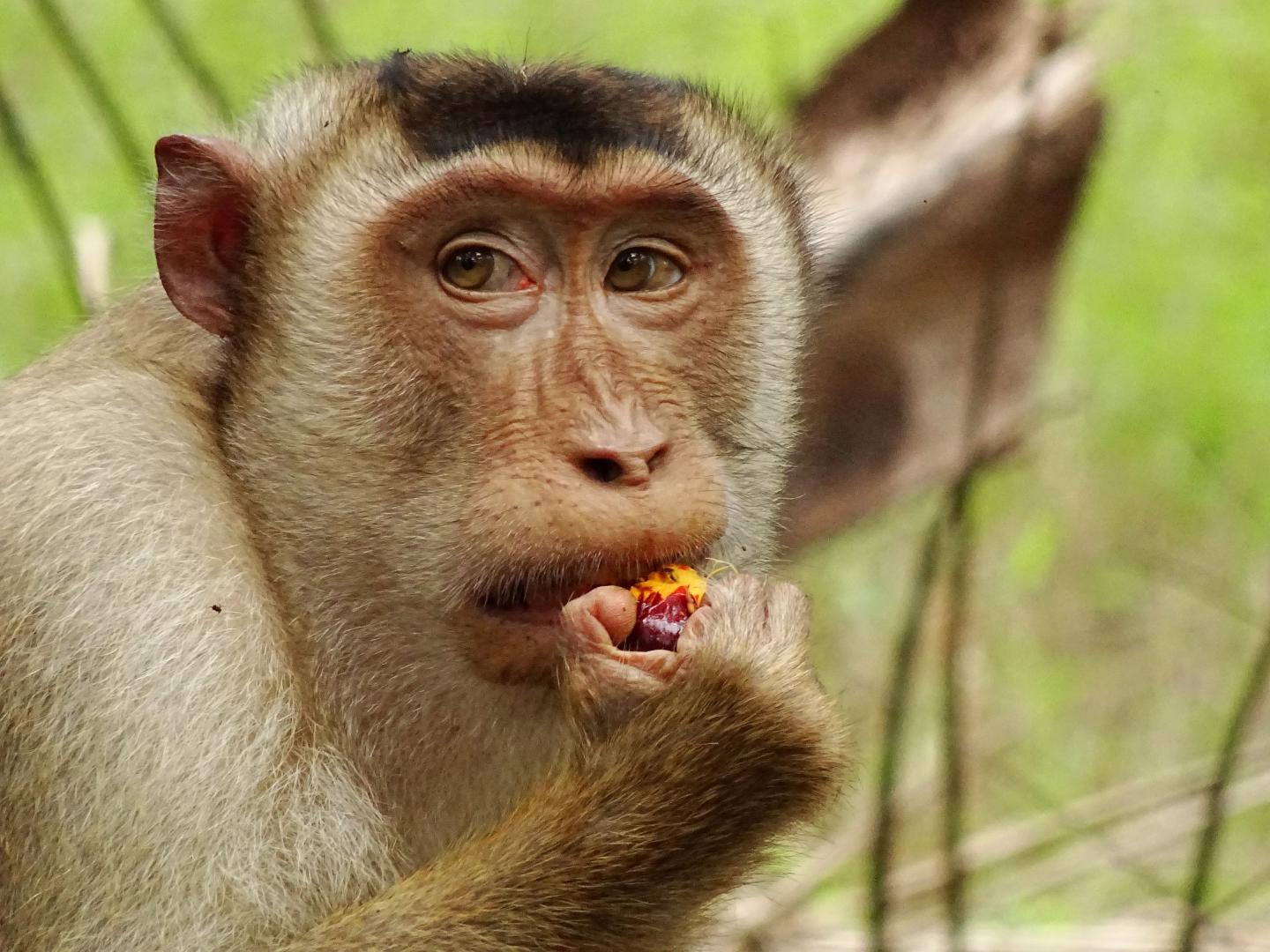 Due to the extensive clearing of their habitat, these primates sometimes turn to palm oil monocultures while foraging. This often leads to conflicts with farmers. The macaques do not damage the palm oil fruits to any great extent. On the contrary, they can even benefit palm oil cultivation, as they are excellent hunters of the masses of rats found on plantations, the main pest found there. As a new study has now been able to prove, however, regularly visiting the plantations has a significant impact on macaques’ social behaviour. This was shown by researchers from the Max Planck Institute for Evolutionary Anthropology (MPI-EVA), Leipzig University (UL), Universiti Sains Malaysia (USM) and the German Centre for Integrative Biodiversity Research (iDiv). The new findings may help to develop appropriate measures for protecting the primate species, which is listed as vulnerable by the IUCN, and to promote peaceful coexistence between humans and wild animals.

It is well known that human-induced disturbances can affect the behaviour of various wildlife species, including primates. Previous studies have mainly focused on changes in the activity patterns or feeding behaviour of animals living in urban or tourist areas and fed by humans. “We, on the other hand, wanted to look at how different habitats, including anthropogenically highly modified habitats such as palm oil plantations, affect social behaviour in macaques,” said Anna Holzner, first author of the study, which was recently published in Scientific Reports. “For most primate species social interactions within the group are particularly essential for successfully surviving in large, complex social groups in their natural habitat.”

To find out, the scientists spent several months observing 50 individuals of two social groups of southern pig-tailed macaques (Macaca nemestrina) in Segari (Malaysia). Dr Nadine Ruppert (USM), head of the local research station, stressed: “This is the first population of this shy species to be habituated to scientific observers. Every day, the groups walk for about three hours from the rainforest to the neighbouring plantation.” The researchers were interested in the differences in the animals’ social behaviour between the rainforest – whose dense vegetation provides protection for the macaques – and two habitats within the palm oil plantation, the interior of the plantation and its edge. These both have an abundance of food in the form of palm oil fruits and rats, and also an increased potential for conflict with humans, but only the plantation edge provides cover in the form of a safe avenue of retreat into the adjacent forest. The study focused on aggressive interactions, relationship-promoting behaviours such as grooming and juvenile social play, social networking within the group, and mother-infant relationships.

Furthermore, the researchers expected strong impairments in the macaques’ positive social interactions. “In particular, bonding social interactions were observed to be greatly reduced in the plantation interior,” said Holzner. “Even during periods not used for feeding, the monkeys there showed almost no mutual grooming or play behaviour.” Unlike the forest, the area inside the plantation poses greater safety risks for the monkeys. The likelihood of encountering potential predators, especially humans or stray dogs, in the plantation was significantly increased compared to the forest. In order to be more vigilant against these threats, it may therefore be the case that macaques compromise on their social behaviour and move time-consuming social interactions into the forest, which offers greater protection. The importance of the rainforest as a safe retreat was illustrated by the results at the edge of the plantation. Protected by the nearby forest, the macaques not only displayed social interaction, but in some cases even increased it. “What surprised us was that the frequency of mutual grooming was almost three times higher at the plantation edge than in the forest,” said Professor Anja Widdig (UL/MPI-EVA/iDiv), lead author of the paper. “Other studies have shown that grooming can serve to reduce stress,” said Widdig. “We suspect that this was at least one of the reasons for the increased investment in social interactions at the plantation edge. Especially before or shortly after visiting the stressful, competitive plantation environment, stress reduction would be of great importance for the animals. Also lower-ranking animals in particular could secure tolerance from their conspecifics in this way, and thus access to a share of the energy-rich food.” This is also indicated by changes in the groups’ network structures: “In contrast to the forest, it was not the higher-ranking animals that had the best social networks on the plantation, but subordinate individuals,” said Widdig.

As expected by the researchers, the plantation also had an effect on the smallest social units within the group: mother-infant pairs. Both inside and at the edge of the plantation, mothers maintained more body contact with their offspring. This could have a number of implications for offspring development. Holzner points out: “If offspring development is delayed, then mothers would have to invest more time and energy, which in turn could extend inter-birth intervals. It is precisely the survival of species whose populations are already threatened that could be jeopardised in the long term as a result.”

Protecting the habitat of the vulnerable pig-tailed macaque

“The study demonstrates that human-induced habitat changes can severely alter social behaviour in groups and, furthermore, disrupt mother-infant relationships – even in the absence of regular direct contact with humans,” said Widdig. It is essential to protect the remaining populations of southern pig-tailed macaques and their habitat and facilitate their coexistent with humans in anthropogenic landscapes. “Their protection will ultimately contribute to maintaining biodiversity and important ecosystem functions of tropical habitats,” said Ruppert. “Maintaining forest corridors is an important conservation tool to create viable interfaces between forests and agricultural landscapes. These can not only facilitate natural dispersal and link fragmented wildlife populations affected, but also enable animals to engage in essential social interactions that are essential for the long-term survival of primates and other species.”