Paleontologists and parasitologists found helminth eggs in coprolites (fossil excrement) of the giant short-faced hyena Pachycrocuta. This is the earliest finding indicating that this species of hyena had toxocariasis and was infected with parasites. A description of the finding was published in Doklady Biological Sciences. 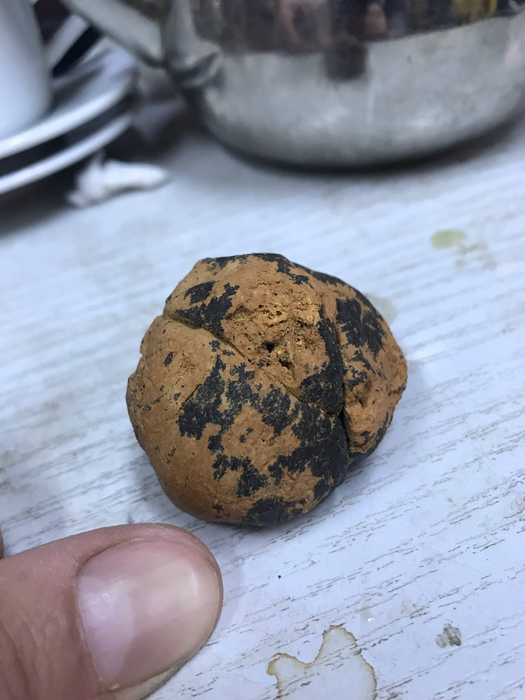 Paleontologists and parasitologists found helminth eggs in coprolites (fossil excrement) of the giant short-faced hyena Pachycrocuta. This is the earliest finding indicating that this species of hyena had toxocariasis and was infected with parasites. A description of the finding was published in Doklady Biological Sciences.

“During excavations in the Taurida Cave (Crimea) we found the remains of large mammals, including at least two dozen individuals of Pachycrocuta hyena, dated to the early Pleistocene (1.5-1.8 million years). We believe that hyenas used the Taurida Cave as a den for quite a long time, because here, in the southern corridor of the cave, there were a huge number of coprolites of hyenas, both single and in large assemblies. The massive teeth and especially strong enamel structure allowed hyenas to gnaw the bones of even large hoofed animals. Therefore, the Pachycrocuta could utilize the carcasses of large herbivores,” says Dmitry Gimranov, Senior Researcher at the Institute of Plant and Animal Ecology of Ural Branch of Russian Academy of Sciences and Laboratory of Natural Science Methods in Humanities at the Ural Federal University.

Scientists analyzed three samples of coprolites, in one of which they found parasite eggs. Based on the size and morphology, paleontologists determined that these were helminth eggs.

Scientists believe, toxocariasis was a widespread disease among extinct hyenas. This is also confirmed by the data of other researchers. Eggs of helminths of 1.2 million years old were found in coprolites of the same hyena species from the Haro site in Pakistan and 0.3-0.5 million years old at the Menez-Dregan site in France. There are also finds in Italy (Costa San Gicomo site) dated at 1.5 million years. The find in Taurida Cave not only “extended” the life of Toxocara by 0.5 million years, but also will help to complete the list of parasites of ancient animals and compare it with helminths of modern hyenas, as well as to clarify other features of ancient animals.

“The coprolites of ancient animals are unique fossils which reflect the biological peculiarities that cannot be demonstrated by studying bone remains. Coprolites can be a valuable source of data on paleoclimate, because they may contain the remains of pollen and spores of ancient plants. Coprolites can also contain the remains of ancient parasites, offering a unique opportunity to obtain additional information about the ecology of extinct species. The study of coprolites can also provide valuable information about social structure of a population,” adds Daniyar Khantemirov, researcher at UrFU Laboratory of Natural Science Methods in Humanities.

Note that the research team included employees of the Ural Federal University, the Institute of plant and animal ecology Ural Branch of the Russian Academy of Sciences and the Perm State Agro-Technological University.

Toxocarosis is an infection caused by animal ascarid larvae. Other helminth eggs of toxocarias mature in the soil and infect dogs, cats and other animals. The source of the disease, toxocara was discovered by the German scientist Werner in 1782. Only in 1950 lesion with these helminthes was isolated as a separate disease. Toxocara eggs are found in the ground and contaminated water.

Evidence of Toxocara Eggs in Pachycrocuta brevirostris (Gervais, 1850) Coprolites from the Pleistocene of Taurida Cave (Crimea)