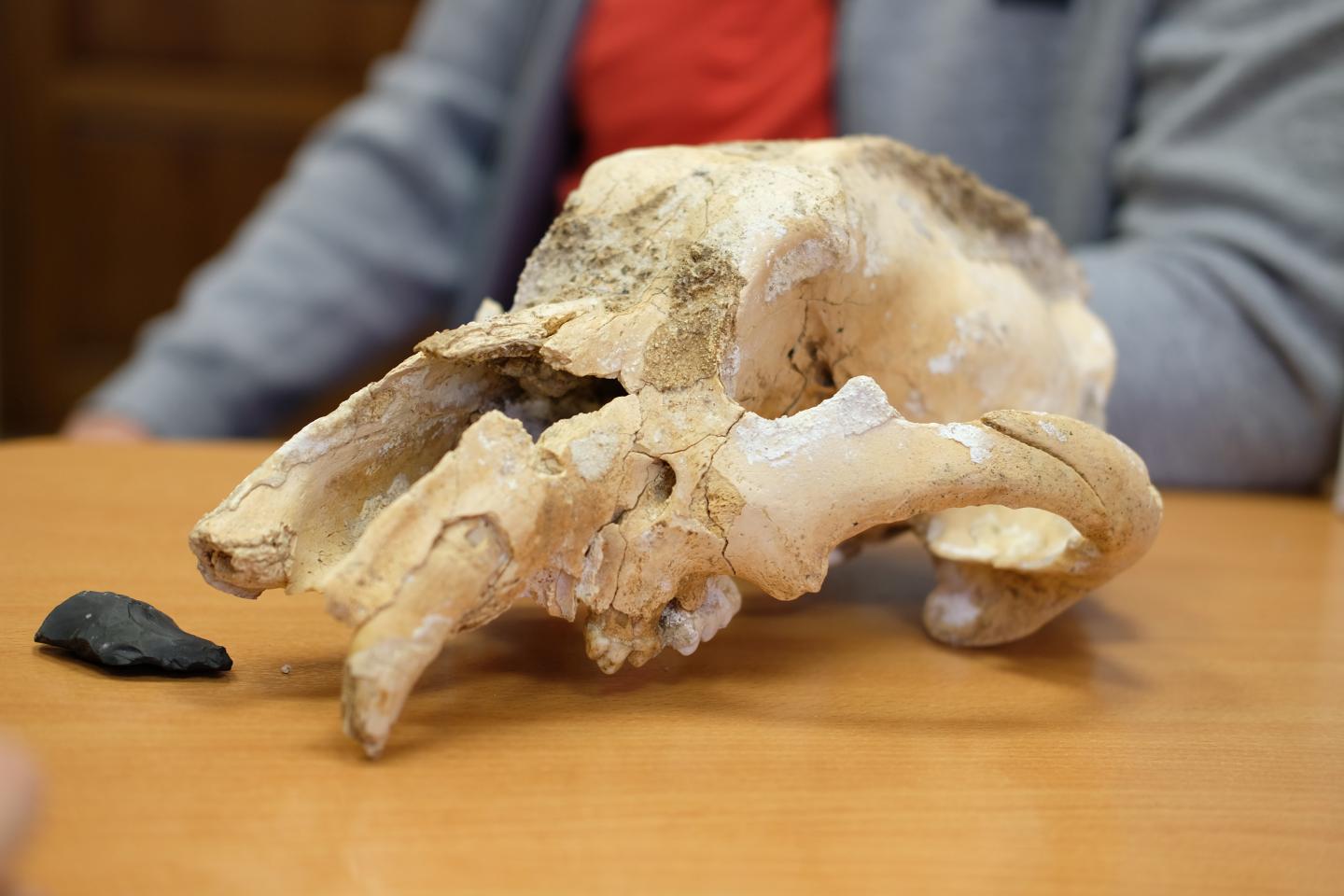 Russian paleontologists discovered the skull of a Pleistocene small cave bear with artificial damage in the Imanay Cave (Bashkiria, Russia). A bear aged 9-10 years was killed with a spear during hibernation about 35 thousand years ago. If the assumptions of scientists are confirmed, the find will become the world’s first direct evidence of a Paleolithic man hunting for a small cave bear. The description of the skull was published in the Vestnik Archeologii, Anthropologii I Ethnographii.

“The hole in the skull could be either natural or artificial,” said senior researcher of the laboratories at the Ural Branch of the Russian Academy of Sciences and the Ural Federal University Dmitry Gimranov. “In the first case, for example, a stone could fall on the bear’s head, or water dripped onto the skull during thousands of years. But this is highly unlikely. Most likely the animal was killed by ancient people.”

To establish whether the bear was killed or not, scientists have to find out when the hole was made – during life or after the death of the animal. In the second case, the hole can be evidence of a ritual.

“In the Paleolithic, ritual, sacred practices were widespread,” said Dmitry Gimranov. “These are handicrafts made of bones, and drawings on the walls of caves not only mammoths’ and much more. Therefore, a hole in the skull could have been made after the death of the bear as a ritual practice. The facts of hunting for bears in general at that time are extremely rare. For example, in Europe, many cave bears’ bones of were found. But for millions of finds, only 20-30 bones have traces of felling, which means that the meat was removed from the animal for eating. And there is only one fact of the hunt. European researchers have found a stone tip in the vertebra of a bear. There have been no such finds in Russia before. Moreover, all found with traces of human hands belong to large cave bears.”

As Gimranov said, hunting for large mammals was essential for life support of ancient humans. However, hunting for small cave bears was not a specialty of the ancient hunters who left traces of their stay in the Imanay cave. At the same time, Paleo human has such strength that he could pierce the bear skull with a spear at close range with relative ease.

The excavations in the Imanay cave, which is located in the Bashkiria National Park, have been carried out by researchers for three years. During this time, paleontologists have collected more than 10 thousand remains of the Late Pleistocene period. Researchers from Yekaterinburg, Moscow, Ufa take part in this study.

Cave bears inhabited the territory of northern Eurasia in the Late Pleistocene (250-10 thousand years ago). These animals were often found in the faunas of Western Europe, the Russian Caucasus, and the Urals. Finds of cave bear bones are common in caves and sometimes form huge clusters. But the caves were inhabited not only by animals but also by ancient man. Therefore, the joint finding of the bones of a cave bear and artifacts is not uncommon. However, the Pleistocene small cave bear is not a very common type of cave bear. For the first time, its remains were found in Great Britain in 1922. Later, the Russian academician Aleksey Borisyak collected and described more voluminous material in Krasnodar (Russia). He named the new species the Russian cave bear. Subsequently, it became known as the “small cave bear”. Both in Russia and the West, “traces” of this species are very rare.

Really large finds are associated with excavations in the 1970s – 1980s in the Kizel Cave in the Perm Region (the finds are stored in St. Petersburg). Ural paleontologists were fortunate enough to discover the Imanay cave, where the bones of a small cave bear turned out to be several times larger than in Kizel Cave. Today, Imanay Cave is the largest deposit of the remains of a small cave bear in the world.