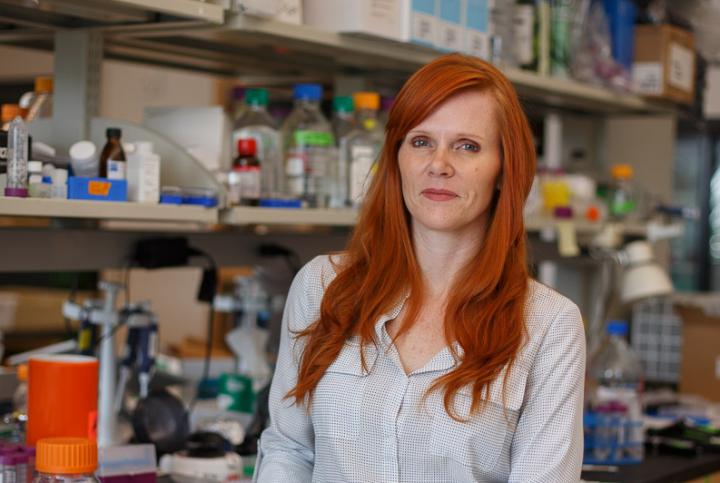 JUPITER, FL — June 19, 2019 — Fight or flight, panic, trembling: Our brains are wired to ensure we respond instantly to fear. While that fear response may save our lives in the dangerous moment, at times people stay on high alert long after the threat has passed, and develop post-traumatic stress disorder.

A new study from Scripps Research in Florida suggests it may be possible to disarm the emotional memories of trauma that drive PTSD symptoms. Scripps Research neuroscientist Courtney Miller, PhD, and her team identified a key molecule found elevated within the brain’s emotional memory processor, the amygdala. Experiments suggest that suppressing that molecule enables faster recovery from trauma. The molecule may also offer a novel biomarker for treatment.

Writing in the journal Molecular Psychiatry, Miller discovered that trauma elevates a specific microRNA in an area of the brain where long-term memories of fear reside, the basolateral amygdala complex. They found the microRNA, called mir-135b-5p, altered in both stress-conditioned mice and in military veterans who had been diagnosed with PTSD following deployment in Afghanistan.

“There are limited options for people with PTSD,” Miller says. “We asked whether we could identify something unique to the storage of traumatic memories to get at the heart of the problem.”

About 10 percent of women and 4 percent of men will experience post-traumatic stress disorder at some point in their lives, putting them at risk for depression and drug addiction, with rates even higher in the military. An estimated 8 million people a year in the United States cope with the disorder. Sleep, thinking, relationships and jobs frequently suffer.

“The main medications used to treat PTSD are selective serotonin reuptake inhibitors, or SSRIs. They can help symptoms, but for many, they don’t help enough,” Miller says. “There’s nothing available that targets the traumatic memories themselves.”

Within our cells, microRNA molecules serve to regulate how our genes are expressed. More than 2,000 different types of microRNAs have been identified recently. Discoveries from Scripps Research and elsewhere have shown its possible to design drug molecules to regulate them as a way of targeting diseases once thought undruggable.

“We chose to focus on microRNAs because of their ability to titrate the expression of many molecules involved in memory, not just one, and we focused on microRNAs expressed specifically under conditions of stress susceptibility to avoid wiping out people’s memories in general,” Miller explains.

Her group worked first with stress-conditioned mice to identify microRNA unique to those who appeared permanently changed by their stress exposure. The mouse research revealed mir-135b-5p as a key differentiator between stressed and resilient mice. Next, they exposed mice to stress conditioning and then silenced mir-135b-5p. Those without the microRNA proved uncommonly resilient.

Working with brain tissue samples from the Harvard Medical School Department of Psychiatry, Miller’s group found that the microRNA was also conserved from mouse to humans. Next, they identified a consortium in the Netherlands that had collected blood samples six months after Dutch military veterans had served in Afghanistan conflict zones for four-month tours. Some had been diagnosed with PTSD.

In the serum from the PTSD group, they likewise found selective elevation of mir-135b’s “passenger” strand.

Looking ahead, Miller wants to explore how time course may affect response to treatment, and how gender differences may involve alternate traumatic memory storage mechanisms. The data from mice suggested a different mechanism was at work in the females, she says.

“I’m excited about the potential of this as a therapeutic target,” Miller says. “The passenger strand may be a biomarker of responsivity to a mir-135-based therapeutic.”

A leading nonprofit biomedical research institute, Scripps Research is ranked No. 1 in the world by Nature Index for scientific innovation. U.S. News and World Report consistently ranks our graduate school in the top 10 in the United States. Our unique structure merges foundational studies in biology, chemistry and computer science with translational research to produce the next generation of drugs and advances in digital and precision medicine. On campuses in California and Florida, scientists in the institute’s five academic research departments work hand-in-hand with researchers of the Scripps Research Translational Institute and Calibr, our drug discovery division. We train the next generation of scientific leaders, expand the frontiers of human knowledge and accelerate the development of new medicines to improve lives around the planet.