Out of sight and out of mind, sewage can actually tell us a lot about health 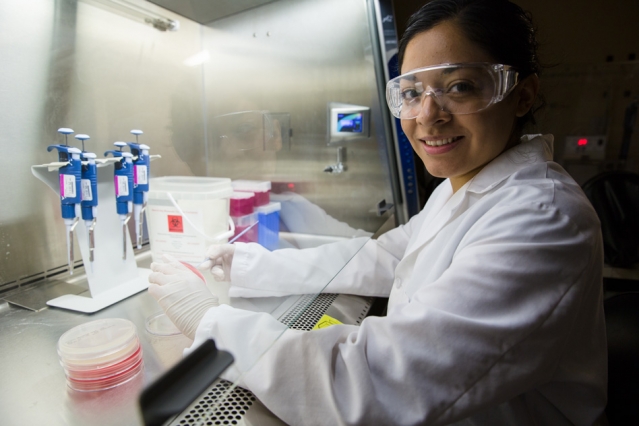 The maxim “one man’s trash is another man’s treasure” certainly describes the work of Mariana G. Matus: The fourth-year PhD student in computational and systems biology at MIT is part of a team collecting samples of sewage to understand community health and behavior.

Although sewage is something most people prefer to leave out of sight and out of mind, Matus says that it is a gold mine of information. A small sample of sewage is likely to contain a variety of biomarkers that can yield data on infectious and chronic diseases such as influenza and inflammatory bowel disease (IBD).

“It’s not something that people really like to talk about,” Matus says. “But human waste can actually tell us a lot about health.”

Unsurprisingly, it wasn’t exactly her dream from day one to study sewage and stool samples; Matus’ research arose from interests in water scarcity and treatment. She grew up in San Luis Potosí, Mexico — an arid, landlocked city plagued by water shortages. Today’s residents of San Luis Potosí only receive water two or three days a week from deep underground wells, which they have to ration to last until the next delivery.

But well water can be dangerous if not filtered properly, and after finishing college in Mexico, Matus moved to the Netherlands for graduate school to study water treatment at Wageningen University. There, sewage was seen as something to treat and swiftly dispose of. But she began to wonder if there could be anything useful about it, too.

In the MIT lab of Eric Alm, an associate professor of biological engineering, she found that the answer is yes.

The project that Matus is now involved in has two goals: collecting sewage samples from manholes around Cambridge and Boston, and collecting stool samples from individuals. Though both have the same aim — to use human waste as a resource for understanding health — one is firmly entrenched in community health, while the other focuses on individuals’ health.

All of the sewers Matus samples service at least 4,000 people, enabling her to get a picture of when and where infectious diseases crop up, and how they spread — allowing her to potentially contribute this information toward efforts to keep such diseases at bay. The project, called “Underworlds,” has been piloted in several locations throughout Cambridge, and will soon move to a full-size experiment in 10 locations across the greater Boston area.

The engineers Matus works with at the Alm Lab and MIT’s Senseable City Lab are in the process of designing automated collectors to be stationed at each of the 10 manholes. The system will both eliminate the need for a person to sample sewage — not a job that Matus or her colleagues are especially quick to volunteer for — and will also synchronize collection across all 10 locations, making it easier to compare samples.

In selecting sewage collection locations, Matus was looking to capture snapshots of health in a variety of communities — commercial, residential, and academic — and across socioeconomic boundaries. Because the areas she collects from service thousands of people, it’s impossible to trace the information back to any one person, building, or household — but that’s exactly what she’s going for, aiming to gather biomarkers for a population without infringing on privacy.

Soon, a $4 million grant will kick in from the the Kuwait Foundation for the Advancement of Sciences, through Kuwait-MIT Center for Natural Resources and the Environment, which will continue to fund this work for three years.

Working with the public

Using a similar approach, Matus hopes to tackle health predictions on the individual level to better understand IBD. This gastrointestinal disease disrupts everyday life for about 1 million Americans, yet very little is known about what causes flares.

By analyzing stool samples and keeping a record of what individuals are eating, Matus, along with researchers from the MIT Center for Microbiome Informatics and Therapeutics, aims initially to predict flares — to at least provide sufferers of IBD with some kind of warning that discomfort may be around the corner. But going forward, she hopes her research will yield a better understanding of what causes the disease in the first place.

Convincing people to donate stool samples can be a barrier to the research, so Matus hopes to work with engineers to develop technologies to obtain samples more easily and seamlessly.

In this work, she’s become acutely aware of the importance of tone in working with the public. She has found that while those with IBD want answers, they are also sensitive to blame. So she steers clear of phrasing such as, “You ate mushrooms two days ago, and that’s why a flare might occur.” Instead, she might opt for something less accusatory, such as, “We found traces of mushroom in your sample, which your body is having a hard time metabolizing.”

Her work with the public extends beyond just the IBD study; Matus has been working closely with the Boston Public Health Commission and the Cambridge Public Health Department to keep both arms of her research grounded.

“I want to design systems to tackle problems that have real people on the other end of them,” says Matus. She expects that her desire to guide her experiments with real-world needs will nudge her toward a career in industry after she completes her PhD.

How the brain encodes time and place

Changes in disparities in access to care, health after Medicare eligibility

Turning the heat on: A flexible device for localized heat treatment of living…

Scienmag Jun 9, 2021 0
Credit: Tokyo Tech Thermotherapy or heat treatment can help in treating lesions and other tissue injuries. For…