Our social interactions begin at a young age

What do building pyramids, going to the moon, paddling a two-person canoe or dancing a waltz have in common? All these actions are the result of a common goal between multiple partners and leads to a mutual sense of obligation, known as “joint commitment”. This ability to cooperate is universal in humans and to certain species of animals, like the great apes. 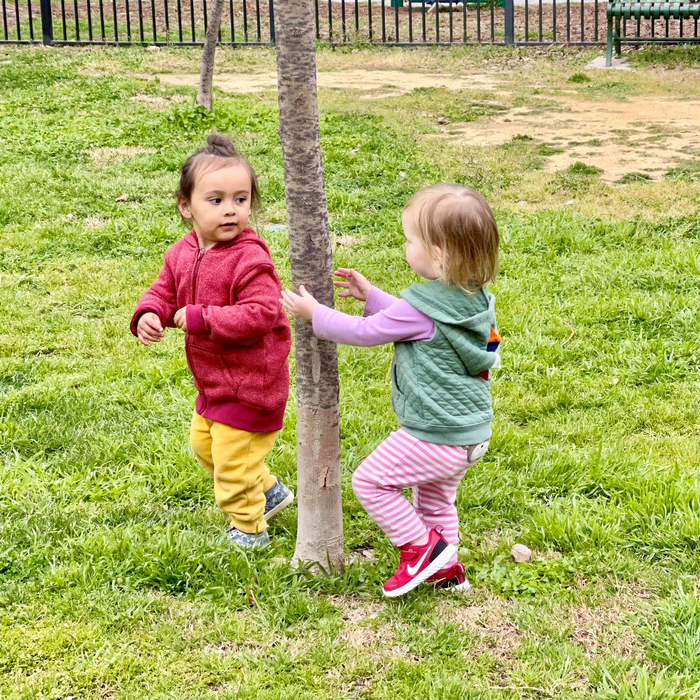 What do building pyramids, going to the moon, paddling a two-person canoe or dancing a waltz have in common? All these actions are the result of a common goal between multiple partners and leads to a mutual sense of obligation, known as “joint commitment”. This ability to cooperate is universal in humans and to certain species of animals, like the great apes.

However, humans seem to have a unique predisposition and strong desire for social interaction that may be one of the components of the emergence of language, according to the authors of the study. How do our social interactions differ from other species? And why? To answer these questions, an international team analysed the interactions of 31 children between the ages of 2 and 4 in four preschools in the United States (10 hours per child). “There have been only a few quantitative analyses of the spontaneous social interactions of 2 and 4 year olds while interacting with peers, although it is a critical age for the development of children’s socio-cognitive abilities. And the ones that exist are either not based on extensive video recordings following individual children for several days or simply do not allow an easy comparison with great apes’ social interactions”, adds Federico Rossano, first author of the study and Assistant Professor at the University of California, San Diego. They then compared their results with similar interactions in adults and great apes

Multiplication of social partners
The researchers analysed the environmental factors (number of partners, types of activities, etc.) surrounding the children. They found that children have more frequent (an average of 13 distinct social interactions per hour) and shorter (an average of 28 seconds) social interactions with their peers than great apes in comparable studies. Adrian Bangerter, co-author of the study and professor at the University of Neuchâtel explains why: “By being exposed to many partners, children learn quickly about the need to coordinate with each other’s behaviour.“ The numbers support this quick learning: 4-year-olds already participate in cooperative social interactions more often than 2-year-olds and fight less than 2-year-olds. “Learning how to coordinate with others and how to communicate towards engaging in joint activities goes hand-in-hand with learning how to minimise conflict” adds Rossano.

Social interactions are usually marked by an entry and an exit phase (when one starts a conversation with eye contact and a “hello” and then signalling that it is ending by repeating “okay, fine” or with a “goodbye”). These signals are also present in 90% of social engagements in bonobos and 69% in chimpanzees. It appears that young children use these signals only 66-69% of the time, less frequently than bonobos and adults. “On one hand this might be due to the appreciation that they will interact again with the same children throughout the day, like two passengers sitting next to each other on a plane starting and stopping quick conversations throughout a flight without using greetings each time they resume talking. On the other hand, it might reflect the fact that not every social interaction is based on joint commitment to each other, i.e. at times young children might be bulldozing their way in and assume other children will just adapt to them rather than coordinating”, Rossano explains. More empirical research will be needed to confirm these behaviours, however this study is a first step in the understanding of the role of joint commitment for human social interaction and how it impacted the evolution of language.

Cooperation in Swiss children
A similar study is currently conducted within the framework of The NCCR Evolving Language, a Swiss research centre that aims at unravelling the biological foundations of language, its evolutionary past and the challenges imposed by new technologies. A team including the co-authors of the University of Neuchâtel is working with the after-school care facilities of Neuchâtel and aims to understand the development of joint action in children by observing how their use of so-called back-channel words (uh-huh, okay) changes over time when they play a LEGO® cooperative game. Adrian Bangerter explains why those terms are important to analyse: “We use “small” words like okay, uh-huh, yeah, or right all the time to synchronise our behaviour with our partners. Yet so little is known about how young children acquire the use of them”.

Social interactions facilitated language evolution
The paper was published in the context of a special issue that focuses on the “Interaction Engine” Hypothesis. This hypothesis postulates that social abilities and motivations in humans were determining factors in the evolution of human language, whose origins remain unknown. In a series of 14 papers edited by Raphaela Heesen of Durham University and Marlen Fröhlich of the University of Tübingen, researchers investigate the social-cognitive capacities that paved the way for the emergence of language by proposing a multidisciplinary and comparative approach. The NCCR Evolving Language is part of this special issue with seven of its researchers co-authoring 4 papers.

Philosophical Transactions of the Royal Society B Biological Sciences