‘Oumuamua is not an alien spacecraft 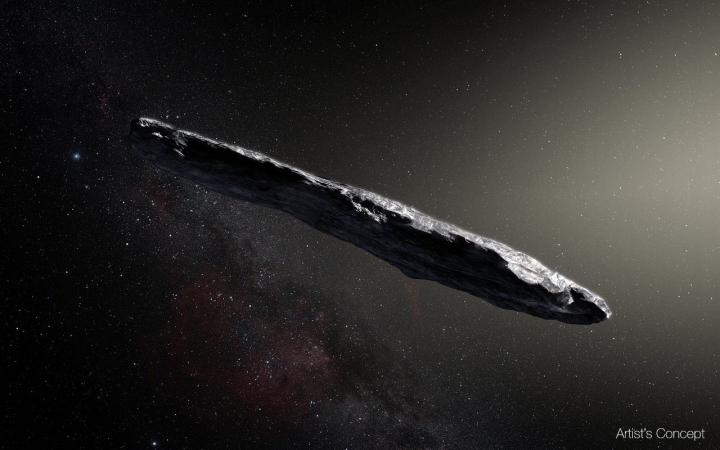 On October 19, 2017, astronomers discovered the first known interstellar object to visit our solar system. First spotted by the Panoramic Survey Telescope and Rapid Response System 1 (PanSTARRS1) telescope located at the University of Hawaii’s Haleakala Observatory, the object defied easy description, simultaneously displaying characteristics of both a comet and an asteroid.

Astronomers formally named the object 1I/2017 U1 and appended the common name ‘Oumuamua, which roughly translates to “scout” in Hawaiian. Researchers from around the world raced to collect as much data as possible before ‘Oumuamua traveled beyond the reach of Earth’s telescopes. In all, they had only a few weeks to observe the strange visitor.

Early reports of ‘Oumuamua’s odd characteristics led some to speculate that the object could be an alien spacecraft, sent from a distant civilization to examine our star system. But a new analysis co-led by Matthew Knight, an associate research scientist in the University of Maryland Department of Astronomy, strongly suggests that ‘Oumuamua has a purely natural origin. The research team reported their findings in the July 1, 2019, issue of the journal Nature Astronomy.

“We have never seen anything like ‘Oumuamua in our solar system. It’s really a mystery still,” Knight said. “But our preference is to stick with analogs we know, unless or until we find something unique. The alien spacecraft hypothesis is a fun idea, but our analysis suggests there is a whole host of natural phenomena that could explain it.”

As Knight and his colleagues summarized in their study, ‘Oumuamua is red in color, similar to many small objects observed in our solar system. But that’s where the familiarity ends.

‘Oumuamua likely has an elongated, cigarlike shape and an odd spin pattern–much like a soda bottle laying on the ground, spinning on its side. According to Knight, its motion through our solar system is particularly puzzling. While it appeared to accelerate along its trajectory–a typical feature of comets–astronomers could find no evidence of the gaseous emissions that typically create this acceleration.

“The motion of ‘Oumuamua didn’t simply follow gravity along a parabolic orbit as we would expect from an asteroid,” Knight said. “But visually, it hasn’t ever displayed any of the cometlike characteristics we’d expect. There is no discernable coma–the cloud of ice, dust and gas that surrounds active comets–nor a dust tail or gas jets.”

Knight worked with Alan Fitzsimmons, an astronomer at Queen’s University Belfast in Northern Ireland, to assemble a team of 14 astronomers hailing from the U.S. and Europe. The International Space Science Institute in Bern, Switzerland, served as a virtual home base for the collaboration.

“We put together a strong team of experts in various different areas of work on ‘Oumuamua. This cross-pollination led to the first comprehensive analysis and the best big-picture summary to date of what we know about the object,” Knight explained. “We tend to assume that the physical processes we observe here, close to home, are universal. And we haven’t yet seen anything like ‘Oumuamua in our solar system. This thing is weird and admittedly hard to explain, but that doesn’t exclude other natural phenomena that could explain it.”

The new research paper is primarily an analysis of existing data, including a December 2017 study of ‘Oumuamua’s shape and spin pattern co-authored by Knight and a team of UMD astronomers. This paper, published in The Astrophysical Journal Letters, relied on data from the Discovery Channel Telescope (DCT) at the Lowell Observatory in Arizona. UMD is a scientific partner of the DCT, along with Boston University, the University of Toledo and Northern Arizona University.

Knight, Fitzsimmons and their colleagues considered a number of mechanisms by which ‘Oumuamua could have escaped from its home system. For example, the object could have been ejected by a gas giant planet orbiting another star. According to theory, Jupiter may have created the Oort cloud–a massive shell of small objects at the outer edge of our solar system–in this way. Some of those objects may have slipped past the influence of the sun’s gravity to become interstellar travelers themselves.

The research team suspects that ‘Oumuamua could be the first of many interstellar visitors. Knight is looking forward to data from the Large Synoptic Survey Telescope (LSST), which is scheduled to be operational in 2022.

“In the next 10 years, we expect to begin seeing more objects like ‘Oumuamua. The LSST will be leaps and bounds beyond any other survey we have in terms of capability to find small interstellar visitors,” Knight said. “We may start seeing a new object every year. That’s when we’ll start to know whether ‘Oumuamua is weird, or common. If we find 10-20 of these things and ‘Oumuamua still looks unusual, we’ll have to reexamine our explanations.”

The prior research paper, “On the Rotation Period and Shape of the Hyperbolic Asteroid 1I/’Oumuamua (2017 U1) from Its Lightcurve,” Matthew Knight, Silvia Protopapa, Michael Kelley, Tony Farnham, James Bauer, Dennis Bodewits, Lori Feaga and Jessica Sunshine, was published in The Astrophysical Journal Letters on December 12, 2017.

University of Maryland
College of Computer, Mathematical, and Natural Sciences