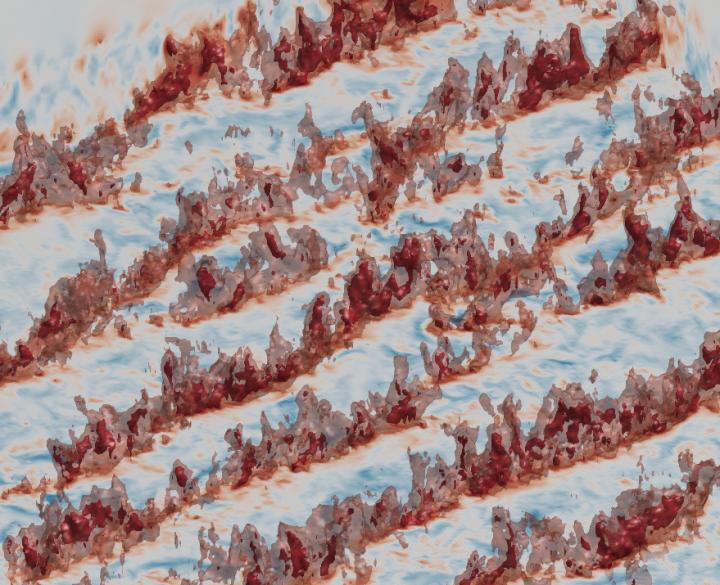 A University of Oklahoma researcher, Scott Salesky, leads a project funded by a half-a-million-dollar grant from the Department of Energy to improve climate modeling. This research project is one of several funded through a $15.6 million initiative by the DOE for new research that aims to improve scientists’ ability to accurately predict weather and climate patterns.

“We are very proud of Professor Salesky and his important new research, which will be funded by the Department of Energy,” said Berrien Moore, dean of the College of Atmospheric and Geographic Sciences and director of the National Weather Center. “Professor Salesky will be advancing our knowledge of the dynamics of the lower atmosphere, which is critical for large-scale weather patterns, including the formation of severe weather.”

Salesky, an assistant professor of meteorology in the OU College of Atmospheric and Geographic Sciences, says his project applies the principles of fluid dynamics common in engineering to the study of turbulent transport, or the exchange of heat, moisture and momentum, in the lower atmosphere with the Earth’s surface.

“Like the airflow over an airplane wing, with weather patterns, you can get some very large-scale organization – streaks of high- and low-speed fluid next to each in the atmosphere – which have been shown to play a really important role in the turbulent transport in these flows,” Salesky said. “The question that we’ve been trying to answer is ‘what happens in the lower atmosphere?'”

Salesky is building upon previous research with W. Anderson in the Mechanical Engineering Department at the University of Texas at Dallas that examined these effects in the lower atmosphere and how these large-scale motions are different from parallel research in engineering that is not impacted by surface heating or cooling.

“We found a number of interesting differences,” Salesky said. “Things really depend on the amount of wind shear you have in the lower atmosphere as compared to the amount of surface heating. It has many implications for turbulent mixing and transport.”

“This is important for things like variability in temperature and humidity,” he added. “For us in Oklahoma, those play a major role in initiating convective storms. It’s also important for greenhouse gas exchange, how carbon dioxide is exchanged between the atmosphere and vegetation.”

“The hope is that by some fairly fundamental research, we will be able to tell meteorologists developing climate models how they can improve the models for exchanges between the Earth’s surface and the lower atmosphere … leading to improved predictability and accuracy by accounting for large-scale organization in the lower atmosphere,” he said.

About the University of Oklahoma

Founded in 1890, the University of Oklahoma is a public research university located in Norman, Oklahoma. OU serves the educational, cultural, economic and health care needs of the state, region and nation. For more information visit http://www.ou.edu.

This research is supported by funding from the Department of Energy, Office of Science, Biological and Environmental Research, Atmospheric System Research. FOA: DE-FOA-0002391; The three-year project begins Aug. 1, 2021. Proposal: 21-0528