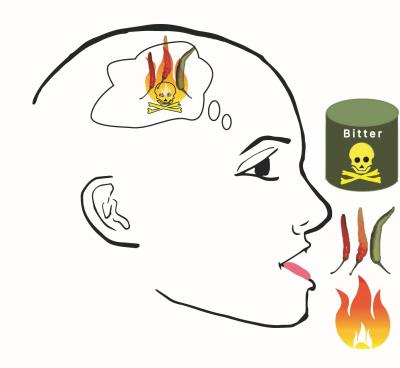 University of Oklahoma neuroscientists have found a pathway in the brain where taste and pain intersect in a new study that originally was designed to look at the intersection of taste and food temperature. This study was the first time researchers have shown that taste and pain signals come together in the brain and use the same circuitry. OU neuroscientists received a five-year, $1.6 million National Institutes of Health grant to study this concept.

“We originally aimed to look at how sense of taste works with thermal sensation in this study to better understand how taste is connected to food preferences, health and well-being. Taste is also closely tied to emotion and understanding how the brain processes different tastes is significant on several levels,” said Christian Lemon, principal investigator on the grant and associate professor in the OU Department of Biology, OU College of Arts and Sciences. “What we found was a surprise because temperature signals were converging with taste near the mid-brain, but so were neural messages for taste and pain.”

Lemon and Jinrong Li, OU research associate, used a molecular biology and physiology technique to understand how taste and thermal pathways might be converging with pain. What OU researchers learned from this study is that the neural circuitry carrying signals for aversive tastes also carries a response to pain. This intersection may support a protective function and opens the possibility that taste messages could change how pain signals are transmitted in the brain, but more research is needed.

The sense of taste is a complicated sensory and nutrient detector that has many implications for how the nervous system guides food preference behaviors and, potentially, response to pain. Now that the circuitry has been identified, OU researchers will explore manipulation of the circuitry to test its influence on behaviors associated with taste and pain. Ultimately, understanding taste is critical to defining its role in human disorders associated with eating behaviors, such as obesity, diabetes, and other conditions and diseases.

Lemon and Li recently published the first paper on this study in the Journal of Neuroscience at http://www.jneurosci.org/content/39/9/1631. For more information about this research, contact [email protected]

Combining science and design to measure our exposure to light

Radiation and plants: From soil remediation to interplanetary flights