CORVALLIS, Ore. – Healthy-looking ochre sea stars have minimal genetic difference from those displaying symptoms of sea star wasting syndrome, say Oregon State University researchers who examined whether genetic variation was the reason some animals went unaffected during an epidemic of the deadly disease. 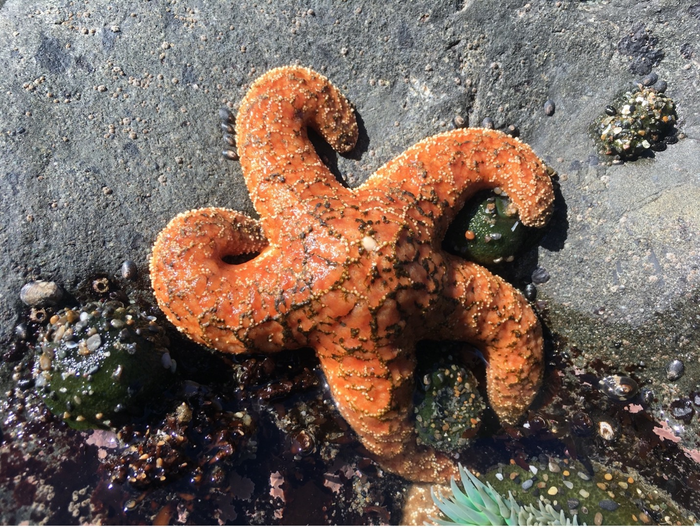 CORVALLIS, Ore. – Healthy-looking ochre sea stars have minimal genetic difference from those displaying symptoms of sea star wasting syndrome, say Oregon State University researchers who examined whether genetic variation was the reason some animals went unaffected during an epidemic of the deadly disease.

Without genes promoting resistance to wasting syndrome, the iconic Pacific Ocean sea star’s ability to persist through future outbreaks is in greater doubt, the scientists say.

Findings were published in Molecular Ecology.

Also called the purple ochre and known scientifically as Pisaster ochraceus, the ochre sea star saw its populations hit hard for three years starting in 2013 by a wasting syndrome epidemic that scientists believe to be the largest marine wildlife disease event in history.

Wasting syndrome affected populations of 20 species of sea stars ranging from Baja California to the Gulf of Alaska, including P. ochraceus, considered a keystone species – one on which other species in an ecosystem lean heavily. The ochre sea star was pummeled over a large portion of its range. Along the Oregon coast, for example, the researchers note that populations underwent declines ranging from 50% to 94%.

The interplay between climate change and disease is threatening wildlife species as never before, said Oregon State’s Andrea Burton, particularly when the result is rapid and extreme drops in population.

“A changing climate is causing the ocean to warm and those rising sea water temperatures are putting more and more stress on marine ecosystems,” said Burton, who led the genetic variation study. “As a result of that stress, marine diseases have become more prevalent over the last few decades. Disease outbreaks cause changes in ecosystems’ community structure and the age distribution within species. A lot of marine taxa have suffered severe declines in population because of outbreaks.”

Burton, a doctoral candidate in integrative biology, and OSU collaborators Sarah Gravem and Felipe Barreto examined a total of 200 individual purple ochre to look for genetic variation between healthy specimens and sick ones. The sea stars were collected from six sites on the central Oregon coast in 2016, when apparently normal sea stars and wasting sea stars were both common at each site.

“Our reasoning was that a sick sea star and healthy sea star nearby were likely exposed to similar conditions, so maybe the ones that looked healthy had some type of genetic predisposition toward resistance or tolerance to sea star wasting syndrome,” Burton said. “It was a unique chance to compare apparently normal and wasting individuals from the same time and place during the sea star wasting syndrome epidemic.”

The scientists took note of observable disease symptoms based on a six-level ranking protocol, ranging upward from twisting arms to deflation, lesions, missing arms, loss of grip on rocks and finally disintegration or “melting.” Only animals with none of those symptoms were considered healthy.

“Through a number of genomic techniques, we found that genomic differentiation between normal-looking and wasting sea stars was very low,” Burton said. “With little genetic variation to propel adaptation, we definitely have even more concerns regarding how this species of sea star will fare in future outbreaks.”

But while a genetic basis for wasting syndrome resilience is probably weak, researchers did identify a list of genomic regions with some association with disease resistance, she said. Those parts of P. ochraceus DNA may have small but cumulative effects in determining how a sea star does in the face of wasting syndrome and thus should be studied further, Burton added.

“Assessing the potential for natural population resilience is a huge piece of predicting the long-term prospects for affected species and all of the species and communities they influence,” she said. “Some marine species are suitable for selective breeding but many others are not, so examining genomic variation in natural populations can help answer the question of whether a species has the genetic makeup to withstand diseases on its own.”

Oregon State University financially supported this research with startup funds to Barreto, an associate professor of integrative biology, and the National Science Foundation also provided funding. Gravem, the other scientist involved with the study, is a research associate at OSU.