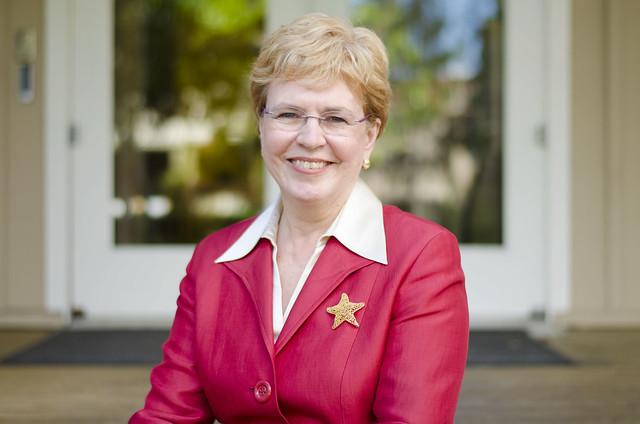 The article by OSU distinguished professor Jane Lubchenco and her collaborators aims to connect the dots between two new international reports, one highlighting the devastating impact of climate change on the ocean, the other an analysis of ocean-related solutions to climate change.

The paper by Lubchenco and the reports by the International Panel on Climate Change, issued today in Monaco and New York, and the High Level Panel for a Sustainable Ocean Economy, released Tuesday in New York at a meeting Lubchenco presided over, are among the key elements of international Climate Week.

Climate Week began Sept. 20 and includes marches and other activities around the world, with a focus on the United Nations and other sites in New York.

The key takeaway of the reports and the paper, Lubchenco said, is that we can now think of the ocean as a source of solutions, not just a victim of climate change. It is clear that the ocean has been bearing the brunt of climate change to date, but untapped ocean-related approaches to fighting climate change could play a large role in capping climate change at 1.5 degrees Celsius above pre-Industrial Age levels as called for in the 2016 Paris Agreement.

“The IPCC Special Report on the Ocean and Cryosphere paints a gloomy picture of the impacts of climate change on the ocean, ocean ecosystems and people, and an even more dismal portrayal of what is in store unless we get serious about reducing greenhouse gas emissions rapidly,” said Lubchenco, a marine ecologist in the OSU College of Science and a former administrator of the National Oceanic and Atmospheric Administration. “But the new analysis conducted for the High Level Panel for a Sustainable Ocean Economy concludes that ocean-based activities have significant potential to help us actually reach the 1.5-degree Celsius target by 2050 – much greater potential than anyone realized.”

Lubchenco, one of the world’s most highly cited ecologists with expertise in the ocean, climate change and interactions between the environment and human well-being, was not directly involved in writing the IPCC Special Report on the Ocean and Cryosphere in a Changing Climate.

She is, though, among the scheduled speakers today in New York at a press briefing, an event being called “Blue Leaders: Call to Action on Ocean and Climate.” Other speakers include heads of state and 16-year-old Swedish activist Greta Thunberg.

This week’s other key report, the one organized by the High Level Panel for a Sustainable Ocean Economy, analyzes five categories of ocean-based activities to evaluate their potential to reduce, sequester and store emissions.

“The report concludes that the first four of those can be deployed right away, but seabed carbon storage will require additional research,” said Lubchenco, who co-chaired the expert group that advises the panel and oversaw the report. “Combined, there is the potential for ocean-based activities to provide as much as 21% of the emission reductions needed to achieve the 1.5-degree target by 2050. That means in addition to the options for reducing emissions that we already knew about, we now have some new and powerful tools to deploy.”

The High Level Panel features 14 heads of state who work together to adopt and promote policies and practices associated with a sustainable ocean economy. Led by the leaders of Norway and Palau, the panel also has representation from Portugal, Ghana, Namibia, Kenya, Chile, Mexico, Jamaica, Canada, Japan, Indonesia, Fiji and Australia.

“Collectively, those nations represent 30% of the world’s coastlines and ocean territories, 20% of the fisheries’ catches, and 20% of the shipping,” Lubchenco said. “This report is the first from the group; 16 others will follow.”

Along with its report, the High Level Panel also released a Call to Ocean-Based Climate Action, challenging nations, businesses and society in general to adopt or promote activities that will help achieve the 1.5-degree goal.

“The report from the International Panel on Climate Change basically says, ‘the problem is bad and likely to get much worse unless we act’; the High Level Panel report says, ‘here’s what we can do, it will matter, and take hope,'” Lubchenco said. “Our paper in Science aims to connect the dots between those two.”

The Earth has already warmed by 1 degree Celsius, sea levels have risen more than 8 inches since 1880, Arctic sea ice is declining at the fastest rate in 1,500 years, and extreme weather events are becoming more common and damaging.

The actions the High Level Panel calls for are “ambitious,” Lubchenco said, “but we argue that they are necessary, could pay major dividends toward closing the emissions gap in coming decades, and achieve other co-benefits along the way.”

Joining Lubchenco as co-authors are Ove Hoegh-Guldberg of the University of Queensland and Eliza Northrop of the World Resources Institute. They write that for “far too long, the ocean has been mostly absent from policy discussions about reducing carbon emissions and meeting the challenges of climate change. Ocean-based actions provide increased hope that reaching the Paris Agreement of 1.5 degrees C might be possible, along with addressing other societal challenges.”

Lubchenco served as an undersecretary of commerce for oceans and atmosphere within the Obama administration and later as the State Department’s first science envoy for the ocean.

She is also a MacArthur Fellow and a member of the National Academy of Sciences.