As the idea of growing tiny human organs in lab dishes has moved in recent years from futuristic science fiction to actual bioscientific reality, the usefulness of organoids as a research tool for studying the digestive system swiftly encountered a bottleneck—these valuable tissues are quite difficult to make. 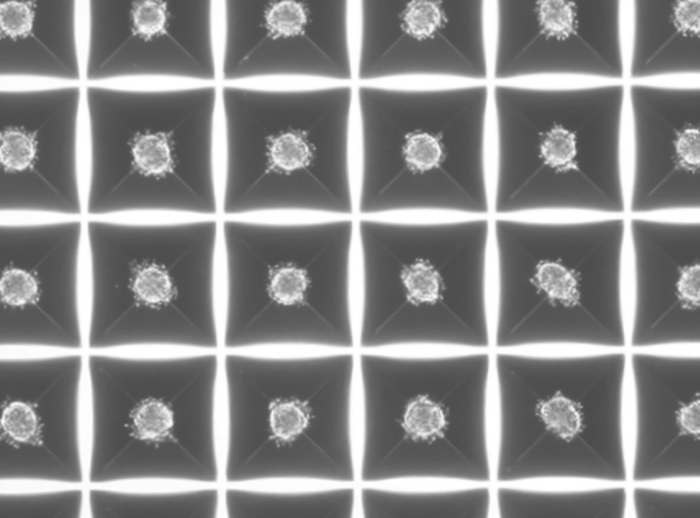 As the idea of growing tiny human organs in lab dishes has moved in recent years from futuristic science fiction to actual bioscientific reality, the usefulness of organoids as a research tool for studying the digestive system swiftly encountered a bottleneck—these valuable tissues are quite difficult to make.

Even with highly trained teams using all the best ingredients and equipment, one batch of starting material can generate lots of tiny spheroids of organ precursor cells that can then be grown into specific organoid types. But the next batch may produce few spheroids or none at all.

As a result, lab teams often experience delays making the organoids they need for pre-clinical experiments that seek to test the safety or potency of potential medications or for basic research to delve deeper into the genetic and molecular activities that cause disease.

Now, in a paper published June 28, 2022, in Stem Cell Reports, a team of experts at Cincinnati Children’s reports developing a method that overcomes this production bottleneck. The new method already is being used to advance organoid studies within the medical center. But since the materials involved can be frozen and thawed and still produce high-quality organoids, this discovery makes it possible to ship starter materials to other labs anywhere in the world—which could spark dramatically accelerated use of human gastrointestinal organoids throughout medical research.

“This method can make organoids a more accessible tool,” says first author Amy Pitstick, MS, manager of the Pluripotent Stem Cell Facility at Cincinnati Children’s. “We show that the aggregation approach consistently produces high yields and we have proven that precursor cells can be thawed from cyrogenic storage to produce organoids of the small intestine.”

“Using this approach will make it possible for many research labs to use organoids in their experiments without the time and expense of learning how to grow induced pluripotent stem cells (iPSCs),” says corresponding author Chris Mayhew, PhD, director of the Pluripotent Stem Cell Facility. “The ability to freeze the precursor cells also will allow labs to easily make organoids without having to start each new experiment with complicated and highly variable iPSC differentiation.”

About the new process

Typically, organoid production requires collecting skin or blood cells that are converted in the lab to make iPSCs. To use these to make intestinal organoids, highly trained lab staff grow a flat layer of organ precursor cells called the mid-hindgut endoderm.

Given the right conditions, early-stage organoids called spheroids spontaneously form into 3D balls of cells. These get collected and transferred into a growth medium that provides the necessary signals for the cells to form into the specific cell types of a human organ—in this case the small intestine.

But the number of spheroids generated this way has proven inconsistent. The Cincinnati Children’s team determined it was possible to collect the unused precursor cell layer and use a centrifuge to drive cells into hundreds of tiny wells contained on small plastic plates. This prompts the formation of 3D cell aggregates that can be collected and used for organoid production.

Testing detailed in the paper shows that the spheroids made this way have no meaningful differences from those that grew spontaneously.

Next, the team placed samples of the precursor cells into freezers for storage. Once these cells were thawed and aggregated, they also formed viable spheroids.

The paper confirms that these spheroids can be reliably grown into more mature organoids that mimic the functions of the small intestine, the large intestine (colon) and the bottom portion of the stomach that connects to the intestines (antrum).

Many potential uses for mass-produced organoids

Even with this advance, it will require years of work to develop organoids large enough and sophisticated enough to use as replacement tissue in transplant surgery. But having lots of easy-to-produce organoids opens many doors for medical research.

Michael Helmrath, MD, Director of Clinical Translation for the Center for Stem Cell & Organoid Medicine (CuSTOM) at Cincinnati Children’s, already has started using materials made from the new process in his ongoing research to develop transplantable intestinal tissues.

“This is a great step forward for the field on many fronts,” Helmrath says. “To be able to reduce the complexity of the process and provide higher yields is beneficial to our work. And to be able to translate the methods to other labs will help move regenerative medicine forward.”

“The work led by Amy and Chris represents an important advance for our efforts to develop high-throughput platforms for drug discovery,” Wells says.