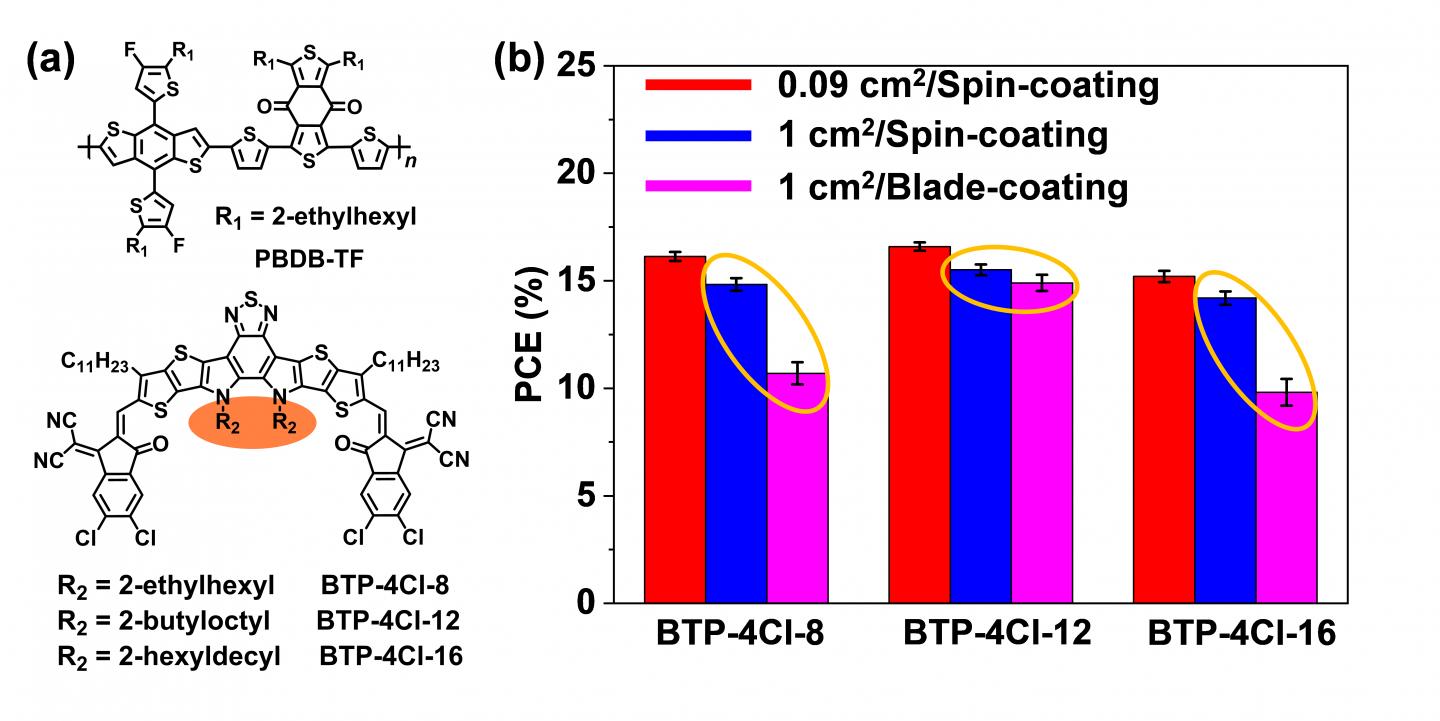 Organic photovoltaic (OPV) cells have attracted considerable research interest because of advantages of lightweight, flexibility and low-cost solution processing. With the development of organic photoactive materials, especially the new-emerging non-fullerene electron acceptors (NFAs), OPV cells have yielded power conversion efficiencies (PCEs) of over 16% in recent years. However, these devices were usually fabricated by spin-coating method at small areas below 0.1 cm2 in laboratories, which are not suitable for future upscale productions.

For the spin-coating process, wet films dry rapidly due to the high spinning speed. However, when large-area coating methods, such as blade-coating, slot-die coating, and spraying-coating methods, are used, wet films dry slowly. The significantly decreased volatilization rate of the solvent gives a much longer time for ordered molecular alignment and aggregation, which may lead to the formation of a larger domain size or excessive phase separation in the active layer. Therefore, it’s still a challenge to fabricate highly efficient OPV cells via large-area fabrication methods.

Recently, the research team led by Prof. Jian-Hui Hou at Institute of Chemistry, Chinese Academy of Sciences, finely optimized the alkyl chains of the BTP-4Cl (a derivative of a well-known NFA, Y6) and synthesized a series of new NFAs BTP-4Cl-X (X = 8, 12 or 16). They applied the new NFAs in fabricating large-area coated OPV cells and achieved good results. The study entitled “17% efficiency organic photovoltaic cell with superior processability” was published in National Science Review.

Researchers successfully demonstrated a high PCE of 17% in the small-area (0.09 cm2) OPV cells based on BTP-4Cl-12. When the blade-coating method was used to extend the active area, 1 cm2 OPV cells obtained an excellent PCE of 15.5%, which is among the top values in the field of OPV cells so far. By cooperating closely with Prof. Wei Ma from Xi’an Jiaotong University, they revealed that BTP-4Cl-12 had balanced solution processability and aggregation features. As a result, the blade-coating film showed a very good phase separation morphology, which contributed to the high carrier transport and suppressed charge recombination in the OPV cells. This work demonstrated the optimization of the chemical structures of the photoactive materials had great significance in larger-area production.