A team of scientists from the Institute of Vertebrate Paleontology and Paleoanthropology (IVPP) of the Chinese Academy of Sciences and from the Shandong Tianyu Museum of Nature (STM) has isolated exquisitely preserved cartilage cells in a 125-million-year-old dinosaur from Northeast China that contain nuclei with remnants of organic molecules and chromatin. The study was published in Communications Biology on Sept. 24. 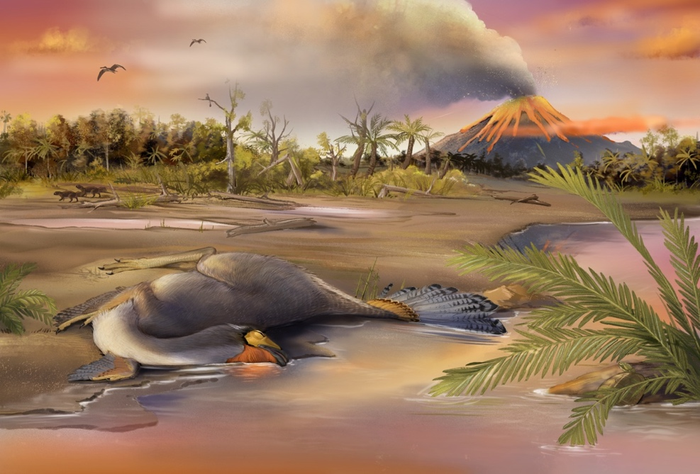 A team of scientists from the Institute of Vertebrate Paleontology and Paleoanthropology (IVPP) of the Chinese Academy of Sciences and from the Shandong Tianyu Museum of Nature (STM) has isolated exquisitely preserved cartilage cells in a 125-million-year-old dinosaur from Northeast China that contain nuclei with remnants of organic molecules and chromatin. The study was published in Communications Biology on Sept. 24.

The dinosaur, called Caudipteryx, was a small peacock-sized omnivore with long tail feathers. It roamed the shores of the shallow lakes of the Jehol Biota in Liaoning province during the Early Cretaceous.

“Geological data has accumulated over the years and shown that fossil preservation in the Jehol Biota was exceptional due to fine volcanic ashes that entombed the carcasses and preserved them down to the cellular level,” said LI Zhiheng, Associate Professor at IVPP and a co-author of this study.

The scientists extracted a piece of distal articular cartilage from the right femur of this specimen, decalcified it, and used different microscopy and chemical methods to analyze it. They realized that all the cells had been mineralized by silicification after the death of the animal. This silicification is most likely what allowed the excellent preservation of these cells.

They also discovered two main types of cells: cells that were healthy at the time of fossilization, and not-so-healthy cells that were porous and fossilized while in the process of dying. “It is possible that these cells were already dying even before the animal died,” said Alida Bailleul, Associate Professor at IVPP and the corresponding author of this study.

Cell death is a process that occurs naturally throughout the lives of all animals. But being able to place a fossilized cell into a specific spot within the cell cycle is quite new in paleontology. This is one of the objectives of the IVPP scientists: to improve cellular imagery in fossils.

Furthermore, the team isolated some cells and stained them with a chemical used in biological laboratories worldwide. This purple chemical, called hematoxylin, is known to bind to the nuclei of cells. After staining the dinosaur material, one dinosaur cell showed a purple nucleus with some darker purple threads. This means the 125-million-year-old dinosaur cell has a nucleus so well-preserved that it retains some original biomolecules and threads of chromatin.

Chromatin within the cells of all living organisms on Earth is made of tightly packed DNA molecules. The results of this study thus provide preliminary data suggesting that remnants of original dinosaur DNA may still be preserved. But to precisely test this, the team needs to do a lot more work and use chemical methods that are much more refined than the staining they used here.

“Let’s be honest, we are obviously interested in fossilized cell nuclei because this is where most of the DNA should be if DNA was preserved,” said Alida Bailleul. Last year she published another study reporting exceptional nuclear and biomolecule preservation in the cartilage cells of a dinosaur from Montana.” So, we have good preliminary data, very exciting data, but we are just starting to understand cellular biochemistry in very old fossils. At this point, we need to work more.”

The team insists they need to do many more analyses and even develop new methods to understand the processes that may allow biomolecule preservation in dinosaur cells, because no one has ever successfully sequenced any dinosaur DNA. In the ancient DNA community, sequencing methods are used to confirm if ancient DNA is preserved in fossils. So far, these methods have only worked for young fossils (not much older than about one million years), but they have never worked for dinosaur material. Dinosaurs are considered way too old to retain any DNA. However, the chemical data collected by the scientists from IVPP and STM suggest otherwise.

Even though more data must be collected, this study definitely shows that 125-million-year old fossil dinosaur cells cannot be considered 100% rock. They are not completely “stonified.” Instead, they still contain remnants of organic molecules. Now, it is vital to figure out precisely what these molecules are, whether they retain any biological information and remnants of DNA.

Nuclear preservation in the cartilage of the Jehol dinosaur Caudipteryx