CORVALLIS, Ore. – Researchers in the Oregon State University College of Engineering have harnessed the power of artificial intelligence to help protect bees from pesticides. 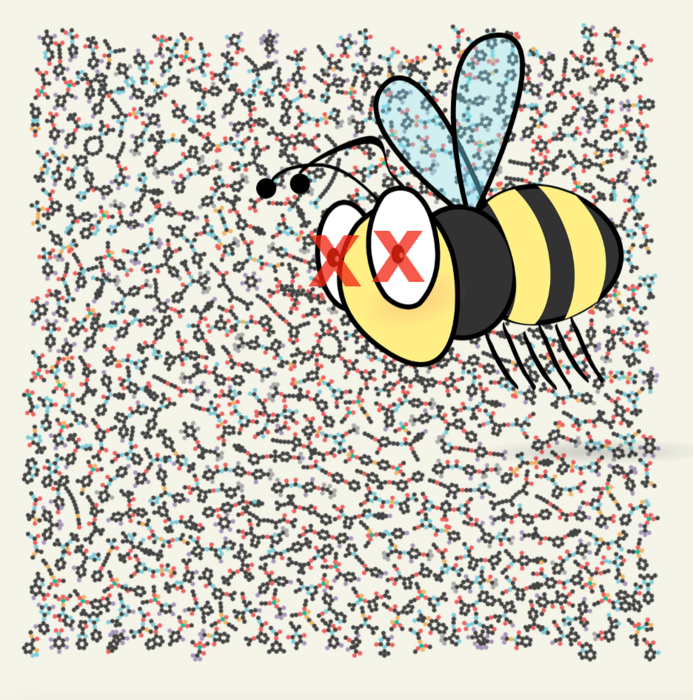 CORVALLIS, Ore. – Researchers in the Oregon State University College of Engineering have harnessed the power of artificial intelligence to help protect bees from pesticides.

Cory Simon, assistant professor of chemical engineering, and Xiaoli Fern, associate professor of computer science, led the project, which involved training a machine learning model to predict whether any proposed new herbicide, fungicide or insecticide would be toxic to honey bees based on the compound’s molecular structure.

The findings, featured on the cover of The Journal of Chemical Physics in a special issue, “Chemical Design by Artificial Intelligence,” are important because many fruit, nut, vegetable and seed crops rely on bee pollination.

Without bees to transfer the pollen needed for reproduction, almost 100 commercial crops in the United States would vanish. Bees’ global economic impact is annually estimated to exceed $100 billion.

“Pesticides are widely used in agriculture, which increase crop yield and provide food security, but pesticides can harm off-target species like bees,” Simon said. “And since insects, weeds, etc. eventually evolve resistance, new pesticides must continually be developed, ones that don’t harm bees.”

“The model represents pesticide molecules by the set of random walks on their molecular graphs,” Yang said.

A random walk is a mathematical concept that describes any meandering path, such as on the complicated chemical structure of a pesticide, where each step along the path is decided by chance, as if by coin tosses.

Imagine, Yang explains, that you’re out for an aimless stroll along a pesticide’s chemical structure, making your way from atom to atom via the bonds that hold the compound together. You travel in random directions but keep track of your route, the sequence of atoms and bonds that you visit. Then you go out on a different molecule, comparing the series of twists and turns to what you’ve done before.

“The algorithm declares two molecules similar if they share many walks with the same sequence of atoms and bonds,” Yang said. “Our model serves as a surrogate for a bee toxicity experiment and can be used to quickly screen proposed pesticide molecules for their toxicity.”

The Journal of Chemical Physics