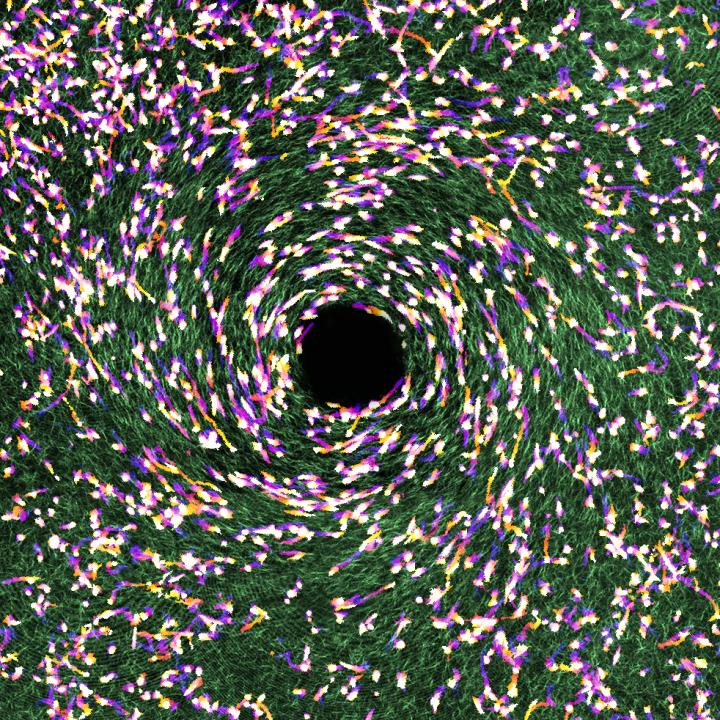 CORVALLIS, Ore. – Oregon State University research has revealed a crucial mechanism behind one of humankind’s most deadly physiological processes: the movement of malignant cells from one part of the body to another.

Published in the Proceedings of the National Academy of Sciences, the study led by OSU biophysicist Bo Sun shows the role that tissues’ microscopic geometry plays in cancer metastasis, the internal spreading of the disease that’s responsible for 95% of all cancer deaths.

Collagen is a protein that serves as the primary component of human connective tissue, which supports, protects and provides structure for other tissues and organs in the body. Collagen is also a key part of the extracellular matrix, the non-cellular part of tissues and organs that acts as a scaffold and also performs important biochemical and biomechanical functions.

“Clinical studies have shown that the microscopic geometry of tissue is significantly correlated with the progression of breast cancers,” Sun said. “Our study reveals the underlying biophysical mechanism. In the era of precision medicine, we think taking into account the physical properties of a patient’s tissue can be critical for the prediction and treatment of metastatic disease.”

The correlation is due to a cellular phenomenon known as “contact guidance,” which is analogous to a back-country hiker trying to pick a route based on the contours of the terrain and the network of downed trees on the ground.

“In navigating the three-dimensional extracellular matrix, where the fibers aren’t necessarily parallel, cells have to integrate multiple guidance cues that aren’t always clear and sometimes are conflicting,” Sun said. “Understanding the mechanisms and limitations of cell responses to imperfect guidance signals is pivotal for predicting and engineering cell behaviors – i.e., providing a patient with a precise diagnosis, prognosis and treatment.”

¬¬In this research, Sun and collaborators at OSU, the University of California San Diego and Northeastern University found that a breast cancer cell can switch between two distinct states: the mesenchymal, in which the cell shape is elongated, and the amoeboidal, in which it’s more round.

“In the mesenchymal state, a cell follows the orientation of tissue fibers, and the effect is strongest when the level of fiber alignment is highest,” Sun said. “In the amoeboidal state, the same cell moves rather randomly. Another part of it is that the transition rate between the two states is also determined by the level of tissue fiber alignment – strong alignment leads to a stronger tendency for a cell to stay in the mesenchymal state.”

The U.S. Department of Defense, the National Science Foundation and the National Institute of General Medical Sciences supported this study, which builds on earlier research by Sun that showed human cells, including cancer cells, could mechanically and permanently remodel their surroundings – and thus affect an array of physiological processes from metastasis to wound healing to embryo development.

In that research, Sun found that a single pair of breast cancer cells could increase the local fiber density of reconstituted collagen matrices by more than 150%.

“Mechanical remodeling is an early event that triggers a cascade of amplifying events that lead to chemical remodeling,” Sun said. “With breast cancer, a lump can be felt because the cancer has solidified a large region around it. Our tissue is trying to relax the cancer cell-generated stress and in so doing goes through unrecoverable aging.”