CORVALLIS, Ore. – Land managers have invested millions of dollars annually since the 1980s to place large pieces of wood back in streams, owing primarily to its importance for fish habitat. But little is known about how large wood in streams impacts birds and land-based animals. 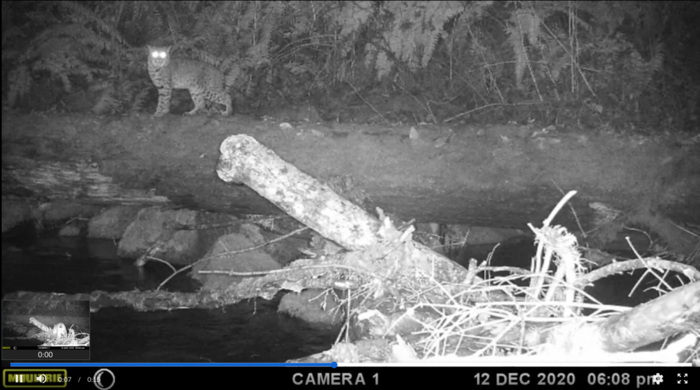 CORVALLIS, Ore. – Land managers have invested millions of dollars annually since the 1980s to place large pieces of wood back in streams, owing primarily to its importance for fish habitat. But little is known about how large wood in streams impacts birds and land-based animals.

Oregon State University scientists Ezmie Trevarrow and Ivan Arismendi are beginning to change that with a just-published paper in Biodiversity and Conservation that outlines what they observed from one year of footage from motion-triggered video cameras they set up near multiple large log jams in a creek just west of Corvallis.

“This study reveals a hidden role of large wood in streams,” said Trevarrow, who conducted the research as an undergraduate in the Honors College at Oregon State and is now a research associate at the University of Georgia. “The findings are valuable for land managers because they demonstrate additional value of restoration projects that involve wood placement into streams.”

In the paper, Trevarrow and Arismendi focused their attention on what species they saw, the most common observed activities and the seasonality of the detections. Among their findings:

Before the 1970s, land managers, recreationists, and the public considered large wood in rivers as undesirable, and the removal of wood from streams was extensively promoted across United States. Think of European settlers and images of clean, flat rivers, Arismendi said.

“There is a lot of cultural legacy there, with log jams areas seen as places that increased flood risk, impeded navigation and transport, and accumulated debris” said Arismendi, an associate professor in the Department of Fisheries, Wildlife, and Conservation Sciences.

However, the scientific and managerial perception towards large wood in streams has changed.

While the benefits of large wood in streams for fish, particularly salmon, have been well studied, few studies have focused on the impact on land-based animals, the Oregon State researchers said.

For their study, they set up 13 cameras between June 2020 and June 2021 along Rock Creek, about 15 miles west of Corvallis. They collected 1,921 videos containing at least one animal detection, including some unexpected species and activities:

Arismendi is expanding the research this summer to Oregon State’s H.J. Andrews Experimental Forest in the Cascades Mountains in Oregon with 30 motion-triggered camera sites.

“This is the beginning of looking into this topic more in-depth,” Arismendi said. “I think there is a lot to unpack about the role of log jams in rivers”

The research was partially funded by an OSU Honors College Experiential Award that Trevarrow received. The paper is a portion of her thesis project and started when she began volunteering in Arismendi’s lab in the College of Agricultural Sciences.