NEWPORT, Ore. – The National Oceanic and Atmospheric Administration has awarded Oregon State University and its research partners $4.2 million to investigate how multiple climate change-related stressors are impacting marine ecosystems off the coast of Oregon, Washington and Northern California. 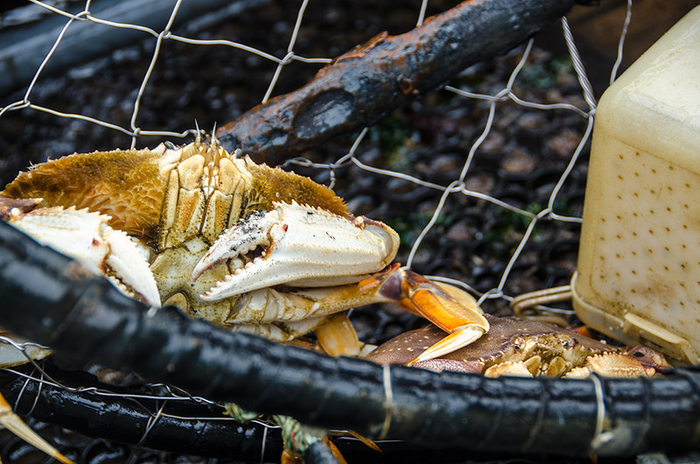 NEWPORT, Ore. – The National Oceanic and Atmospheric Administration has awarded Oregon State University and its research partners $4.2 million to investigate how multiple climate change-related stressors are impacting marine ecosystems off the coast of Oregon, Washington and Northern California.

The researchers will focus on two key species: Dungeness crab, which plays a significant economic and cultural role in Indigenous and other coastal communities and is considered the most valuable single-species fishery in Oregon; and krill, which are tiny crustaceans that play a critical role in the ocean’s food web and serve as a bellwether for ocean health.

The goal of the new project is to better understand the direct and indirect impacts of those stressors and help commercial fisheries and state and Tribal resource managers prepare for the changes ahead, said Francis Chan, the principal investigator. Chan is a marine ecologist and director of the Cooperative Institute for Marine Ecosystem and Resources Studies at OSU’s Hatfield Marine Science Center in Newport.

“We know that the climate is changing, and it is impacting our marine resources,” Chan said. “This work is all about how we can best position the Dungeness crab fishery to be more resilient to these changes. At the conclusion of this work, we hope to have answers to help fishermen and managers get to a climate-ready fishery.”

The work will focus on the northern California Current, the span of waters along the West Coast from Washington to Northern California, including NOAA’s Olympic Coast National Marine Sanctuary and longstanding Tribal fishing areas.

Researchers will use existing and new ocean data, ocean and climate models, laboratory experiments and fisheries management evaluation techniques to learn more about the relationships between the different stressors and the potential cascading impacts that may result.

“We are connecting the dots on key pieces of innovative ocean research, including observations from undersea autonomous vehicles, AI-driven analytics of ocean food webs and state-of-the-art climate models,” said Jack Barth, executive director of OSU’s Marine Studies Initiative and an oceanographer in the College of Earth, Ocean, and Atmospheric Sciences.

A key component of the project is the integration of Traditional Ecological Knowledge, which is the accumulation of Indigenous science, including information, practices and beliefs about relationships and environmental functions, including all elements, species and processes within ecosystems.

Siletz Tribal member and TEK specialist Samantha Chisholm Hatfield, an assistant research professor in the Department of Fisheries, Wildlife, and Conservation Sciences in OSU’s College of Agricultural Sciences, will lead that aspect of the project.

The work will include interviews with Tribal members to better understand changes to shellfish populations and ocean patterns that Tribal members have orally documented over multiple generations.

“We want to provide context around what changing ocean conditions might mean for the future, not just for the commercial industry, but also the cultural impacts for Tribal communities on the West Coast,” she said.

Tribal fishers also will contribute to the collection of scientific data on ocean conditions in their areas. The research team also will work closely with Tribal and commercial fishery leaders through establishment of a management advisory board.

“The involvement of an advisory board is essential. We want to make sure that our science will provide answers to questions that people working the fishery are looking for and can use.” Chan said.

“With all of the information we gather, we hope to give people a clear view of what the future will look like for the fishery in this region. We will also look at how current resource management tools, such as size limits and seasonal closures, as well as other options that fishers and managers identify, might be used in the future to safeguard the fishery.”

Additional OSU researchers on the project are Maria Kavanaugh of the College of Earth, Ocean, and Atmospheric Sciences; Bob Cowen, Su Sponaugle and Moritz Schmid of Hatfield Marine Science Center; and Nina Bednarsek of the Cooperative Institute for Marine Ecosystem and Resources Studies.