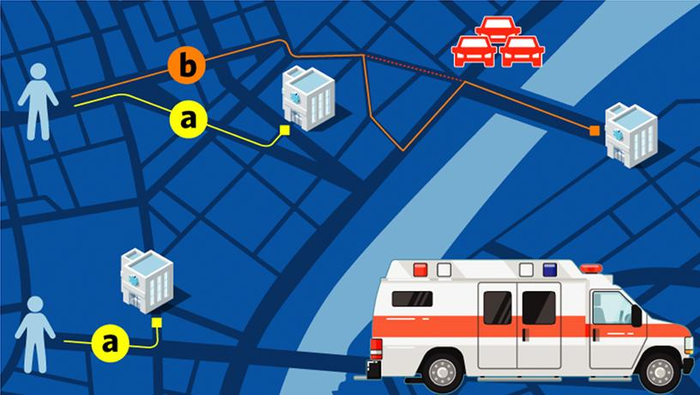 During pandemic, Columbia engineers team up with the Fire Department of New York to improve EMS response operations and balance hospital capacity loads

New York, NY—November 23, 2021—Researchers at Columbia Engineering have teamed up with the Fire Department of New York (FDNY) to upgrade the FDNY’s ambulance Emergency Medical Services (EMS) response operations and optimize hospital capacity balancing so that hospitals aren’t overwhelmed in the future by an unprecedented patient surge like the one that occurred in the early months of the pandemic.

FDNY oversees New York City’s 911 EMS system, providing coverage for all five boroughs of the city with ambulances and specialized response vehicles. It currently operates two-thirds of the nearly 450 ambulances in NYC’s 911 system directly, with the rest provided by about 22 of New York City’s private hospitals. In addition, 198 fire engine companies provide medical response to a subset of life-threatening emergencies. These services were sorely stretched during the pandemic, and FDNY has been developing a number of innovations in its EMS system to reduce response time to potentially life-threatening medical emergencies. One of its most critical innovations is how to improve its approach to deploying its EMS resources to minimize response time.

In mid-January 2021, FDNY launched an ambulance system optimization process designed by Columbia engineers in collaboration with FDNY analysts and subject matter experts that was integrated with existing FDNY computer-aided-dispatch (CAD) functionality. The new system is the result of an earlier Columbia Engineering collaboration with the NYC Department of Transportation (DOT) to analyze traffic data and a new optimization process designed to mitigate ambulance overcrowding at a single hospital or groups of hospitals while neighboring hospitals have capacity.

Optimizing transports when hospitals are predicted to be overloaded is viewed as a “planning ahead” approach to hospital overload, and it is designed to minimize the need for hospital redirection or hospital diversion requests, which remain in place as last-resort options to relieve overwhelmed emergency departments.

FDNY has been working with the Columbia Engineering team, led by Andrew Smyth, Robert R.W. and Christine S. Carleton Professor of Civil Engineering and Engineering Mechanics, and Henry Lam, associate professor of industrial engineering and operations research, for almost two years. The project, which received core funding from Google.org in January 2020 and subsequent supplemental support from Columbia Engineering’s COVID-19 Urban Tech Award, is an offshoot of an earlier collaboration by Smyth with the DOT that analyzed vehicle telematics data from its own NYC government vehicle fleet over a number of years. As part of the project, Smyth’s group developed an in-house open-source routing software that can be modified for use with different types of street map platforms used in other cities, as well as a custom-made map-matching software package that can estimate the location of GPS position data in dense urban areas, which are prevalent in NYC. This software package was adapted for use with FDNY ambulance automatic vehicle locator data, creating a new, invaluable network analysis capability for the Department.

“Our DOT project was a perfect fit with what the FDNY needed,” says Smyth, who is also the chair of the Smart Cities Center at Columbia’s Data Science Institute. “We already had developed a program for the DOT that gave us very high resolution of traffic speed distributions of every street in NYC by time of the day and day of the week. Understanding ambulance traffic behavior throughout the city and spotting new patterns gave us a headstart on optimizing the EMS. Our new pattern for FDNY EMS is shaving about a minute off ambulance trips from incident locations to hospitals for thousands of emergencies.”

Intent on consolidating efforts to effectively analyze EMS innovations, FDNY recently created a new approach to managing analytics, which includes three collaborative teams specializing in Data Quality, Operations Research, and Geographic Information Systems. With a focus on developing an array of quantitative tools and models to answer several efficiency and policy questions on the table, FDNY came to Columbia Engineering for Lam and Smyth for their expertise in optimization, simulation, and data analytics that would help improve the EMS systems.

Lam’s group was already working with Smyth’s team to layer a load-balancing optimization program on top of Smyth’s traffic pattern. Lam’s program “suggests” hospital destinations for 911 patients that alleviate the workloads of overwhelmed hospitals while still ensuring short trips, thus optimally balancing the demand and supply of patient intakes at a city-wide level. Beneath this program, which runs daily on the FDNY’s CAD, is a data-driven optimization algorithm that integrates predictive models of incidents, hospital capacities, and travel times. Lam’s group worked closely with FDNY to back-test the algorithm via simulation modeling and data from the pandemic surge, before the FDNY launched it on January 13, 2021.

“The integration of operations research and AI in this project has created a powerful approach to improve the EMS system,” Lam noted. “It provides a solution to safeguard hospital loads across the city against future incident surges.”

Kat Thomson, FDNY Assistant Commissioner, Management Analysis and Planning, added, “This new approach also integrates the concept of optimization directly into the EMS system, and it is very intuitive to stakeholders. Where the FDNY was historically taking corrective action on already overwhelmed emergency departments, this new approach provides the opportunity for the FDNY analytics team to plan ahead, analyze projected overload against actuals on a rolling basis, and validate results in near real time using data visualization. Data outputs of the optimization also facilitate communication on the initiative between hospitals and the agency.”

The initiative uses FDNY 911 transport data and hospital bed availability data from the New York State Department of Health’s daily Health Electronic Response Data System (HERDS) survey. Lam’s optimization algorithm assesses gaps between staffed hospital bed supply and demand based on predicted transports in the vicinity of the receiving hospitals for the next day, with the assumption that 40% of ambulance transports will result in an admission.

The optimization is currently being run only for patients under the “general emergency department” critical care category (CCC), which accounts for approximately 80% of all transports. No specialty CCC codes are eligible yet for load balancing in this initiative.