The study is based on the bachelor’s degree final project in Biomedical Engineering by Ainhoa M. Aguado, first author of the article, who worked under the leadership of Òscar Camara of the Physense group 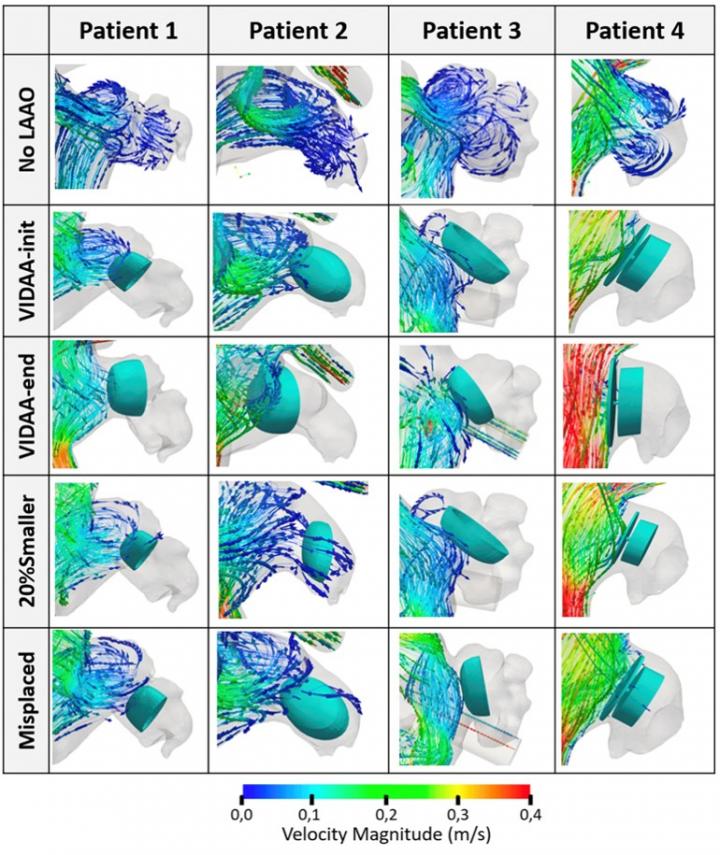 According to clinical studies, about a third of patients with atrial fibrillation will suffer a stroke during their lifetime. Between 70 and 90% of these strokes are caused by a thrombus formed in the left atrial appendage.

In patients with contraindications to oral anticoagulants, a left atrial appendage occluder (LAAO) is often implanted to prevent blood flow entering in the LAA. But this strategy is not without problems and often the success of the device depends on the clinician’s experience. Implementation can even lead to blood clots outside the device, eventually leading to stroke if not treated.

The aim of a study, published in March in Frontiers in Physiology, was to develop tools based on biophysical models and interactive interfaces to optimize LAAO device therapies. The study was led by Òscar Camara, a researcher with the Physense Research Group, which is a part of the BCN MedTech Unit at the UPF Department of Information and Communication Technologies (DTIC). “A study that summarizes the good work of our research team over the past three years and is part of the bachelor’s degree final project in Biomedical Engineering by Ainhoa M. Aguado, first author of the study”, explains Camara.

To obtain the most appropriate LAAO configurations for a given patient-specific LAA morphology, the researchers created a web-based 3D interactive virtual implantation platform called VIDAA. Then, based on the features of the shape of the patient’s appendage, the researchers calculated the most promising LAAO device.

Using the geometric and anatomic data of the patient’s left atrial appendage, together with the most suitable ad hoc device, volumetric meshes were built to run computational fluid dynamics simulations. Thus the researchers were able to assess estimated blood flow patterns after device implantation.

Thus, by combining the VIDAA platform with computational simulations it has been possible to identify the LAAO configurations associated to a lower risk of thrombus formation and also to reveal that the positioning of the device is a key element in the creation of regions with turbulent blood flows after implantation.

This work was led by Oscar Camara with the participation of his team, researchers of the Physense Research Group, at the UPF Department of Information and Communication Technologies, together with researchers from the Interventional Cardiology Division at Hospital de la Santa Creu i Sant Pau of the Autonomous University of Barcelona and the Cardiology Department at Hospital Clínic, of the University of Barcelona. There has also been international participation via the Arrhythmia Unit of the Cardiology Department at the Aalst Cardiovascular Centre in Belgium.

The research was supported by the Spanish Ministry of Economy and Competitiveness in the framework of the María de Maeztu Units of Excellence (MDM-2015-0502) and the Retos R&D Programme (DPI2015-71640-R).

KAT6A syndrome: Advances on the genetic bases and clinical picture of a rare disease

How electric fields affect a molecular twist within light-sensitive proteins

Scienmag Feb 13, 2020
A better understanding of this phenomenon, which is crucial to many processes that occur in biological systems and…