WASHINGTON, March 15, 2022 — Solar-powered adsorption cooling systems (SACS) have gained traction as a renewable energy technology that could provide clean power for air conditioning and refrigeration while significantly reducing the load on the electric grid. But these systems lack energy efficiency. 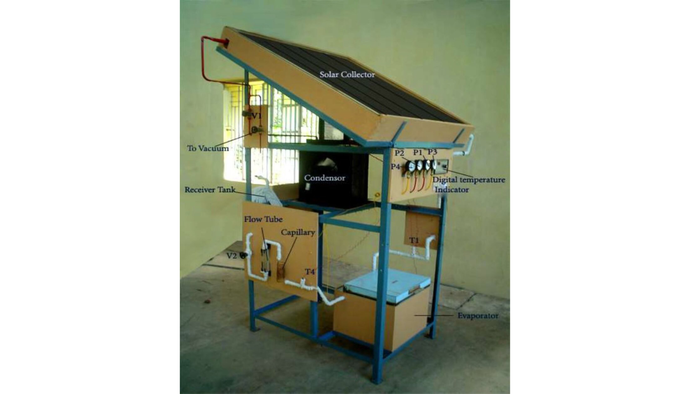 WASHINGTON, March 15, 2022 — Solar-powered adsorption cooling systems (SACS) have gained traction as a renewable energy technology that could provide clean power for air conditioning and refrigeration while significantly reducing the load on the electric grid. But these systems lack energy efficiency.

In the Journal of Renewable and Sustainable Energy, by AIP Publishing, researchers from Anna University in India developed an optimizer tool to design, evaluate, and maximize the performance of different types of SACS under various operating scenarios. The tool was created using Visual Basic programming language that is easy to learn and enables rapid application development.

“Our user-friendly optimizer is a multifunctional tool capable of designing and analyzing a complete solar powered adsorption refrigeration system,” co-author Edwin Mohan said. “Our tool is capable of assessing different combinations of operational parameters to determine the settings that maximize system performance.”

SACS, which work by turning solar energy into heat, consists of a sorption bed, condenser, liquid storage tank, expansion valve, and evaporator. At night, water or another refrigerant is vaporized through the evaporator.

During daylight hours, heat obtained from the sun causes the vapor to travel through the condenser, where it is reliquefied to release latent heat. The liquid eventually returns to the evaporator to repeat the process.

One of the most important elements of SACS is the pairing of materials used in the adsorption process in which atoms or molecules of a substance (the adsorbate) adhere to the surface of a porous material (the adsorbent), like activated carbon and zeolite, to maximize the surface-to-volume ratio.

In their study, the researchers used their computational tool to test two adsorbent/adsorbate pairs: activated-carbon and methanol, and zeolite and water. The experiments were carried out over four days in a prototype SACS with a cooling capacity of 0.25 kilowatts. They found the activated-carbon-methanol combination achieved a higher coefficient of performance, but the zeolite-water adsorption system could operate at higher temperatures.

Although the study focused on residential home cooling systems, the researchers said their optimizer tool could be extended to higher capacity systems.

The article “Optimization and experimental analysis of a solar-powered adsorption refrigeration system using selective adsorbent/adsorbate pairs” is authored by Saravanan Namasivayam and Edwin Mohan. The article will appear in Journal of Renewable and Sustainable Energy on March 15, 2021 (DOI: 10.1063/5.0076645). After that date, it can be accessed at https://aip.scitation.org/doi/full/10.1063/5.0076645.

Journal of Renewable and Sustainable Energy is an interdisciplinary journal that publishes across all areas of renewable and sustainable energy relevant to the physical science and engineering communities. Topics covered include solar, wind, biofuels and more, as well as renewable energy integration, energy meteorology and climatology, and renewable resourcing and forecasting. See https://aip.scitation.org/journal/rse.

Journal of Renewable and Sustainable Energy