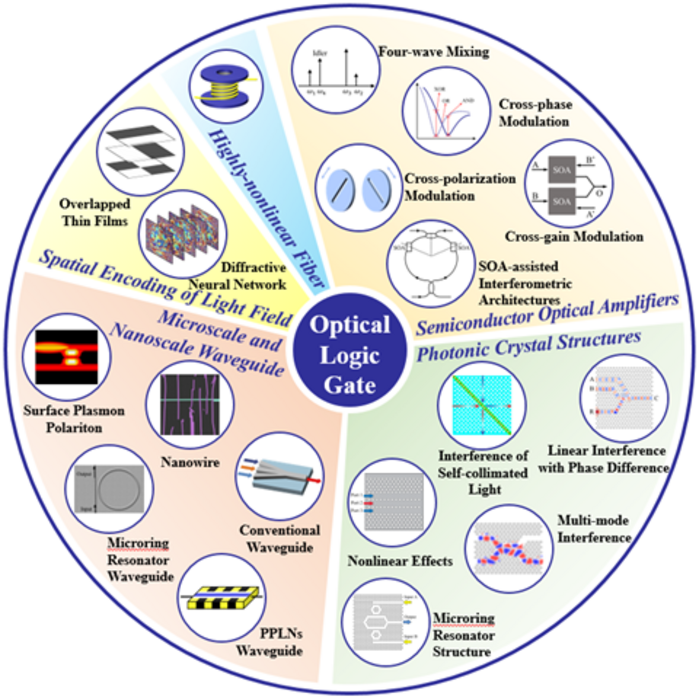 If you are reading this on your smartphone, its CPU (central processing unit) is running at its full speed. It is a tiny chip containing billions of the more basic units called logic gates. In the world of electronic computers, logic gates are implemented in the form of transistors, the invention of which has led to several Nobel Prizes in physics in 1956. However, various types of electronic computers including smartphones, laptops and huge server systems, are facing great challenges and bottlenecks. For example, the well-known Moore’s law curve is becoming more and more flattened. It is increasingly difficult for the task that “the number of transistors an integrated circuit can accommodate will be doubled in about every 18 months” to be realized. The classical von Neumann architecture, which requires a lot of data to be transferred back and forth between CPU and memory, is becoming more and more exposed. The heavy power consumption of countless computing devices around the world is also a critical concern.

In addition to electronic computers, scientists have been looking for alternative new computer schemes. Quantum computers, biological DNA computers, molecular computers and other ideas are constantly being attempted. Among them, optical computer is definitely a possible option by replacing electronic devices with photonic devices and electrical signals with optical signals. Light field has amplitude, phase, time, space, frequency, polarization and other dimensions, which can be used to represent information, while reflection, refraction, interference, diffraction and other optical effects can be used to process information. It seems natural to use light for calculation.

In the novel “The Three-body Problem”, by a famous science fiction writer Cixin Liu, the emperor on a planet in a three-body system, builds a “human computer” with thousands of soldiers, each waving a black or white flag to indicate a binary signal, which is used as a logic gate. It indicates that logic gates do not necessarily need to be implemented electronically. So how can we build different types of logic gates using optics?

As the simplest way of implementing optical logic gates, spatial coding of optical field has been proposed very early in the 1970s and 1980s. Its working principle is straightforward and can be performed even without special optical experimental conditions in a laboratory. It can be realized by using small pieces of ordinary transparent thin films or perforated paper cards.

Later, many researchers turned their attention to an optical device called a semiconductor optical amplifier (SOA), which resembles an optical version of the electronic transistor to certain extent, but still with many differences. SOA enables a variety of nonlinear effects between input and output light signals of different frequencies, which can be used to construct mathematical relations of logic gates. In addition, SOA also has the effect of four-wave mixing. Through appropriate settings, two light signals of different frequencies can be used as the input to generate a third frequency of light as the output, and the phase of the output signal is the sum of the phases of the two input signals. Other types of logic gates can also be implemented by SOA with proper design. Highly nonlinear fiber (HNLF) is another type of optical device that has many similar properties to SOA and can also be used in the realization of optical logic gates.

In more recent studies in this century, with the development of integrated photonics and micro-nano fabrication technology, waveguides and other optical devices can be implemented on optical chips and photonic crystal structures in a micrometer or even nanometer scale, and “miniature versions” of optical logic gates are emerging. Despite the diminutive size, basic optical principles are still at work, including the interference of two waves of light. In the waveguide, it is easiest to adjust the phase, as long as the length of the light propagation can be changed. The light intensity after interference of these two light waves can be used as logic gate output. Depending on the difference of input signal amplitude and phase, the light intensity after constructive or destructive interference can be equivalent to the target logic gate output value (close to 0 or 1).

The combination of line waveguide and micro-ring waveguide is another common way. It is worth mentioning that in this design, we can combine line waveguides and microrings into a system in which light waves can be propagated through multiple coupling resonances, like multiple mechanical gears, to achieve a certain type of logic gate operation. In addition, surface plasmons, nanowire, periodically poled lithium niobate (PPLN) and other technologies are also extensively used in micro/nano optical logic gates.

Opto-Electronic Science (OES) is a peer-reviewed, open access, interdisciplinary and international journal published by The Institute of Optics and Electronics, Chinese Academy of Sciences as a sister journal of Opto-Electronic Advances (OEA, IF=9.682). OES is dedicated to providing a professional platform to promote academic exchange and accelerate innovation. OES publishes articles, reviews, and letters of the fundamental breakthroughs in basic science of optics and optoelectronics.

Submission of OES may be made using ScholarOne (https://mc03.manuscriptcentral.com/oes)