Optical clocks started the calibration of the international atomic time 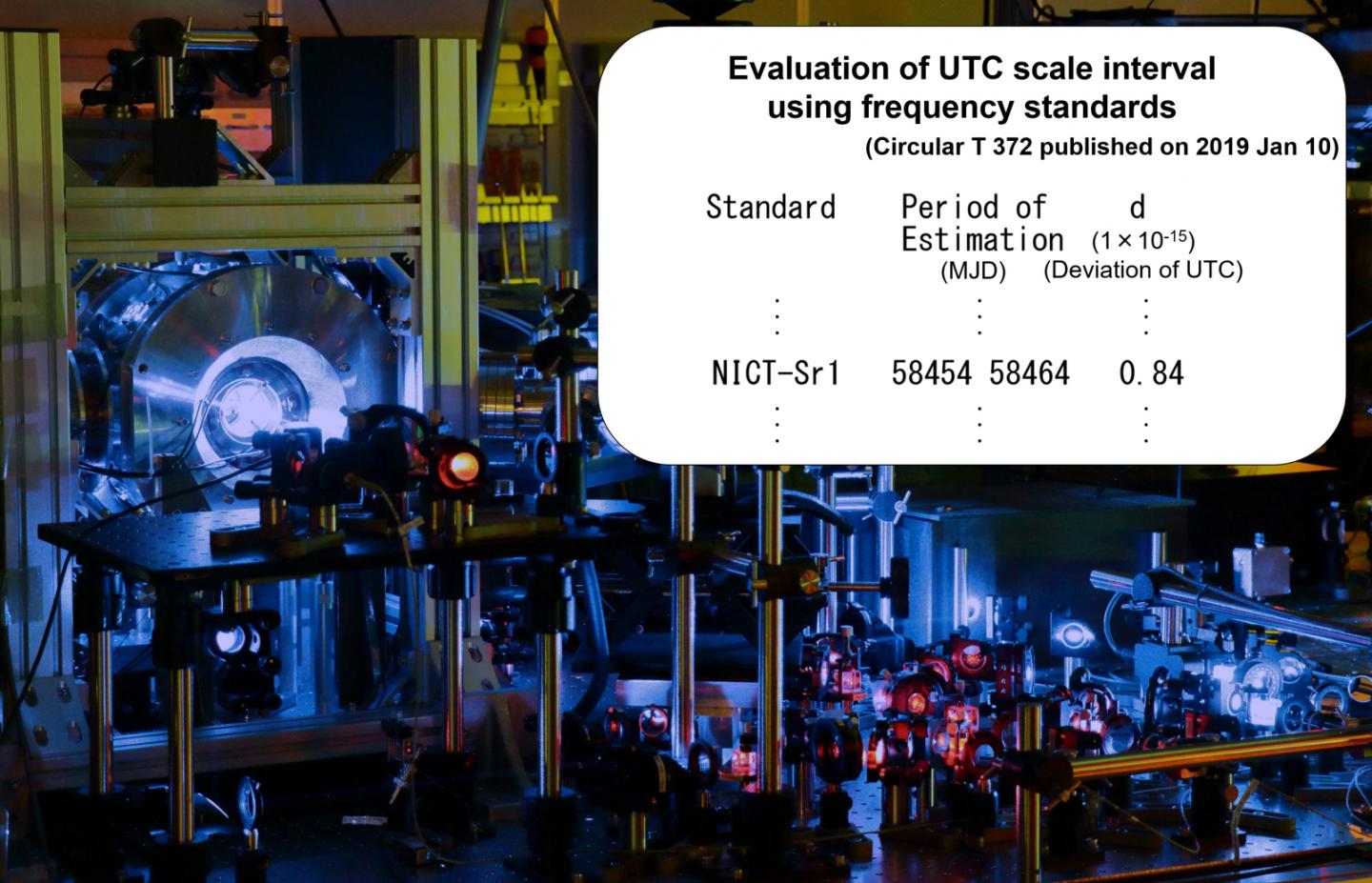 Optical clocks of the National Institute of Information and Communications Technology (NICT, Japan) and LNE-SYRTE (Systemes de Reference Temps-Espace, Observatoire de Paris, Universite PSL, CNRS, Sorbonne Universite, France) evaluated the latest “one second” tick of the International Atomic Time (TAI) and provided these data to the Bureau International des Poids et Mesures (BIPM) to be referred for adjusting the tick rate of TAI. Primary frequency standards based on the cesium microwave clock transition or a secondary standard based on a rubidium microwave transition have long played a role to calibrate the scale interval of TAI. The capability of optical clocks, which have made rapid progress in the last twenty years, were recently recognized to be valid, and the two laboratories, in Asia and Europe, finally started the evaluation of TAI using their optical lattice clocks. The two calibrations agreed and are consistent with those provided by state-of-the-art microwave standards, demonstrating the compatibility to adopt optical clocks as a reference that BIPM refers to to adjust the tick rate of TAI. This achievement is found in the “Circular T”, a monthly report issued by the BIPM Time department.

Coordinated Universal Time (UTC) is a timescale that various systems such as national standard time, information networks, and international financial systems depend on. UTC differs from TAI by an integer number of seconds, which are the cumulated leap seconds. To generate TAI, BIPM collects data of more than 400 atomic clocks operated in public laboratories over the world and computes their weighted mean.

Its splendid reliability is realized by hundreds of clocks, but the accuracy of the ticking rate has been maintained by the calibrations provided by the state-of-the-art frequency standards, of which international working groups of metrologists recognize the capability. BIPM refers to these calibration data to accelerate or decelerate the ticking rate of TAI in order to be consistent with the SI second.

While microwave standards have long been in charge of calibrations, it has been anticipated that optical clocks, which has made rapid progress over the last decade, would also serve to steer TAI.

The two independent evaluations agreed with consistent results of 0.84(71)E-15 and 0.74(74)E-15 at NICT and LNE-SYRTE, respectively. State-of-the-art primary frequency standards in PTB and SYRTE were also being operated during these ten days, and their calibrations were also consistent with the two results, indicating the validity of using optical clocks to provide a reference to steer the tick rate of TAI. After pilot submission of calibrations of TAI by optical clocks at LNE-SYRTE and NICT that were included in the circular T in 2018 after a review process, this is the first time that optical clocks contribute to steering TAI in real time.

The calibrations were also incorporated to compute more accurate timescale TT(BIPM). Once a year, BIPM reviews TAI with reference to the calibration results reported from laboratories and corrects UTC. The correction turns out to be a more accurate timescale called TT(BIPM). The two calibrations provided by NICT and LNE-SYRTE this time also contributed to the computation of TT(BIPM2018), which were published by BIPM on February 1, 2019.

These results will also contribute to the future redefinition of the second. Optical clocks including the lattice clocks at NICT and LNE-SYRTE have already surpassed the state-of-the-art primary frequency standards based on cesium in various aspects. Time and frequency metrologists have initiated a discussion toward the change of the definition of the SI second, which may occur in 2026 in the earliest.

Optical clocks are now operated in various laboratories, and we expect that more laboratories will contribute to the generation of TAI by providing the evaluation results to BIPM. Reliable calibrations by more optical clocks will allow BIPM to foresee a possible maintenance of UTC based on the new optical definition of the second. The various calibration data will also provide information to determine the absolute frequency of the Sr optical clock transition, which may turn out to be the frequency that defines the new SI second.

UTA associate professor elected as fellow of American Society of…