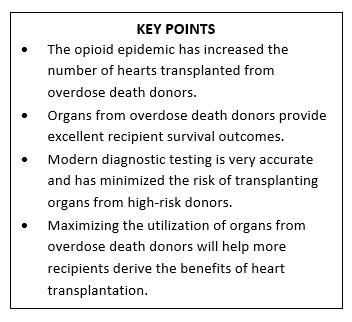 Chicago, June 6, 2019 – The confluence of two major health crises–the opioid epidemic and organ shortage–has moved surgeons to consider transplanting organs deemed as less than “perfect” in an effort to expand the donor pool and save more lives, according to research published online today in The Annals of Thoracic Surgery, published by Elsevier.

“The opioid epidemic has increased the proportion of hearts transplanted from overdose death donors (ODD),” said Nader Moazami, MD, of NYU Langone Medical Center in New York, NY, USA. “One of the roles of the transplant community is to at least partially mitigate the tragedy of this exponentially growing problem by maximizing the utilization of organs from ODD.”

Dr. Moazami and colleagues evaluated trends in organ donation and transplants among drug overdose deaths using data from the Scientific Registry of Transplant Recipients for the years 2000 to 2017. Of the 15,904 isolated heart transplants from adult donors during this period, opioid overdoses (10.8 percent) were the fourth most common cause of death, behind blunt injury (30.5 percent), hemorrhage/stroke (22.1 percent), and gunshot wound (18.3 percent). In 2017, overdoses accounted for more than 20 percent of donor deaths in 11 states; whereas in 2000, the highest state’s rate was 5.6 percent and 33 states had less than 1 percent of donor deaths attributed to overdoses. The researchers also identified a significant increase in the percentage of transplants that utilized ODD hearts: 1.1 percent in 2000; 6 percent in 2012; and 14.2 percent in 2017. The current rate of ODD utilized for heart transplantation is 16.9 percent–a 14-fold increase from 2000.

“The dramatic increase in the rate of ODD utilization was striking, and it has increased concordantly with the rate of overdose deaths,” said Dr. Moazami. “The significant impact of the opioid epidemic on transplantation is one of the major reasons that organ transplant numbers have increased over the last several years.”

In addition, the researchers found that donors who died from opioid overdoses were frequently younger than age 40 and had higher rates of substance abuse. However, they also had lower rates of diabetes and hypertension. As a result, the researchers found that ODD hearts had “favorable heart donor quality” and provided excellent outcomes equivalent to all other mechanisms of donor deaths (non-overdose).

“We do not believe that overdose status alone is a valid reason to discard an otherwise viable donor heart, and this study supports that ODD organs should not be rejected due to inappropriate bias,” said Dr. Moazami. “With no significant difference in survival between ODD and non-ODD recipients, further expansion of this donor pool may be appropriate, with more hearts potentially used for transplantation.”

For other organs, the opioid epidemic has also boosted the number available for donation in the US. In another study from Dr. Moazami and colleagues to be published in The Annals, opioid ODD provided 7 percent of the transplanted lungs from 2010-2017, up from 2 percent in 2000-2007. The overall findings also concurred with those of this recent study, suggesting that ODD lungs do not pose any extra safety risk to transplant recipients.

The recent rise in opioid use has not only resulted in opioid-related overdose deaths, but also a surge in hepatitis C virus (HCV) cases due to injection drug use. In fact, the study showed HCV is often the reason why organs are discarded and not used. But in the current era, medical advances and sophisticated testing have helped minimize the risks associated with transplanting an organ that is hepatitis C positive, explained Dr. Moazami. In addition, hepatitis C is now a curable disease, so if organ recipients become infected, antiviral medication can be administered, making it especially important that efforts are made to minimize discarding HCV-positive organs and improve efficient utilization of them, according to the researchers.

“In spite of the public crisis that the opioid overdose epidemic has created recently, the impact on organ transplantation and the unintended consequences of increasing the number of donor hearts is noteworthy,” said Robert S.D. Higgins, MD, MSHA, Surgeon-in-Chief of The Johns Hopkins Hospital in Baltimore, STS President, and former president of the United Network for Organ Sharing (UNOS), who was not directly involved with this research. “Many of these donors have been associated with diseases that have historically been considered ‘high risk’ by public health services. This important study highlights the need for additional research in this area to further define the ‘risk’ as well as the reward of expanding the donor pool to save more lives.”

According to UNOS, more than 36,500 transplants were performed in 2018–more transplants than ever before. Approximately 3,400 of those were heart transplantations. While 2018 was a record-breaking year, the need for organ donors remains massive. On average, 18 patients died every day waiting for a transplant in 2017.

Find comprehensive medical information presented for patients by leading experts in cardiothoracic surgery on the STS Patient Website (ctsurgerypatients.org). For a copy of The Annals article, contact Jennifer Bagley at +1 312 202 5865 or [email protected]”>[email protected]

About The Society of Thoracic Surgeons

Founded in 1964, The Society of Thoracic Surgeons is a not-for-profit organization representing more than 7,500 cardiothoracic surgeons, researchers, and allied health care professionals worldwide who are dedicated to ensuring the best possible outcomes for surgeries of the heart, lung, and esophagus, as well as other surgical procedures within the chest. The Society’s mission is to enhance the ability of cardiothoracic surgeons to provide the highest quality patient care through education, research, and advocacy.

The Annals of Thoracic Surgery is the official journal of STS and the Southern Thoracic Surgical Association. It has an impact factor of 3.779. http://www.annalsthoracicsurgery.org

Elsevier is a global information analytics business that helps scientists and clinicians to find new answers, reshape human knowledge, and tackle the most urgent human crises. For 140 years, we have partnered with the research world to curate and verify scientific knowledge. Today, we’re committed to bringing that rigor to a new generation of platforms. Elsevier provides digital solutions and tools in the areas of strategic research management, R&D performance, clinical decision support, and professional education; including ScienceDirect, Scopus, SciVal, ClinicalKey and Sherpath. Elsevier publishes over 2,500 digitized journals, including The Lancet and Cell, 39,000 e-book titles and many iconic reference works, including Gray’s Anatomy. Elsevier is part of RELX Group, a global provider of information and analytics for professionals and business customers across industries. http://www.elsevier.com

The Society of Thoracic Surgery

A home-based weight management program benefits both children and parents

For dying patients, early plans can improve quality of life

Low-calorie sweetener derived from lactose gets manufacturing boost from yeast

Scienmag Apr 15, 2019
Credit: Photo courtesy Yong-Su Jin CHAMPAIGN, Ill. -- The quest to satisfy the sweet tooth without adding to the…

A molecule that directs neurons