Findings in rats suggest that a pufferfish toxin, properly packaged, could offer a safe pain block 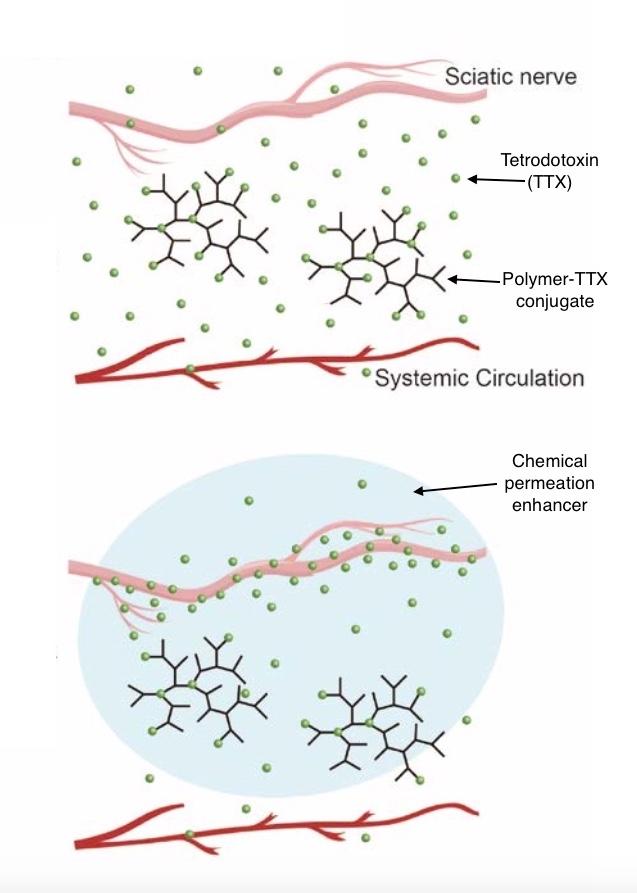 Opioids remain a mainstay of treatment for chronic and surgical pain, despite their side effects and risk for addiction and overdose. While conventional local anesthetics block pain very effectively, they wear off quickly and can affect the heart and brain. Now, a study in rats offers up a possible alternative, involving an otherwise lethal pufferfish toxin.

In tiny amounts, in a slow-release formulation that efficiently penetrates nerves, the toxin provided a safe, highly targeted, long-lived nerve block, researchers report today in Nature Communications. The study was led by Daniel Kohane, MD, PhD, director of the Laboratory for Biomaterials and Drug Delivery at Boston Children’s Hospital.

Kohane has long been interested in neurotoxins found in marine organisms like pufferfish and algae. In small amounts, they can potentially provide potent pain relief, blocking the sodium channels that conduct pain messages. Kohane’s lab has experimented with various ways of packaging and delivering these compounds in tiny particles, activating local drug release with ultrasound and near-infrared light, for example.

Rather than load tetrodotoxin into particles as before, the team bound it chemically to a polymer “backbone.” The body very slowly degrades the bond between tetrodotoxin and the polymer via hydrolysis, the natural breaking of chemical bonds by water). This releases the drug at a slow, safe rate.

“A lesson we learned is that with our previous delivery systems, the drug can leak out too quickly, leading to systemic toxicity,” says Kohane. “In this system, we gave an amount of tetrodotoxin intravenously that would be enough to kill a rat several times over if given in the unbound state, and the animals didn’t even seem to notice it.”

“We can modulate the polymer composition to control the release rate,” Zhao explains.

To further increase safety, the team paired the tetrodotoxin-polymer combination with a chemical penetration enhancer, a compound that made the nerve tissue more permeable. This allowed them to use smaller amounts of tetrodotoxin but still achieve nerve block.

“With the enhancer, drug concentrations that are ineffective become effective, without increasing systemic toxicity,” says Kohane. “Each bit of drug you put in packs the most punch possible.”

“We show that both the penetration enhancer and the reversible bonding of toxin to polymer are crucial to achieving such prolonged anesthesia,” adds Liu.

When the researchers injected the combination near the sciatic nerve in rats, they achieved a nerve block for up to three days, with minimal local or systemic toxicity and no apparent sign of tissue injury.

In theory, nerve block in humans could last even longer, since one could administer it more safely than in rats, says Kohane. Using polymers with a longer retention time in tissue would also prolong effects.

“We could think about very long durations of nerve block for patients with cancer pain, for example,” he says. “Certainly for days, and maybe for weeks.”

The investigators together with Boston Children’s Hospital have applied for a patent covering the technology. For information on licensing, contact [email protected] in Boston Children’s Technology and Innovation Development Office.

Zhao and Liu were co-first authors on the Nature Communications paper. Coauthors, all in the Laboratory for Biomaterials and Drug Delivery, were Claudia Santamaria, Andre Shomorony, Tianjiao Ji, Tuo Wei, Akiva Gordon, Hannes Elofsson, Manisha Mehta and Rong Yang. The work was supported by the National Institutes of Health (NIH R35 GM131728).

Boston Children’s Hospital is ranked the #1 children’s hospital in the nation by U.S. News & World Report and is the primary pediatric teaching affiliate of Harvard Medical School. Home to the world’s largest research enterprise based at a pediatric medical center. Its discoveries have benefited both children and adults since 1869. Today, more than 3,000 scientists, including 8 members of the National Academy of Sciences, 18 members of the National Academy of Medicine and 12 Howard Hughes Medical Investigators comprise Boston Children’s research community. Founded as a 20-bed hospital for children, Boston Children’s is now a 415-bed comprehensive center for pediatric and adolescent health care. For more, visit our Discoveries blog and follow us on social media @BostonChildrens, @BCH_Innovation, Facebook and YouTube.