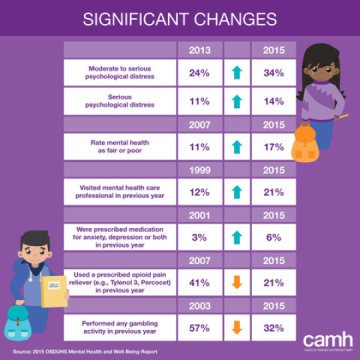 More than one in three — an estimated 328,000 — Ontario students in grades seven to 12 report moderate-to-serious psychological distress, according to new survey results from the Centre for Addiction and Mental Health (CAMH). Girls are twice as likely as boys to experience psychological distress.

“This is a significant number of young people, especially girls, who are experiencing high levels of psychological distress,” says Dr. Robert Mann, senior scientist at CAMH and co-lead investigator of the Ontario Student Drug Use and Health Survey (OSDUHS). A total of 10,426 students from across Ontario participated in the 2015 OSDUHS, the longest-running school survey of adolescents in Canada, and one of the longest-running surveys in the world.

“We were also surprised to see this number increase to 34 per cent in 2015 from 24 per cent in 2013. That is a 10 per cent jump in reported psychological distress in just two years,” said Dr. Mann.

Psychological distress is defined as symptoms of depression and anxiety and is measured using a six-item screening tool. Students are asked how often they felt nervous, hopeless or worthless, among others indicators, in the last four weeks. Forty-six per cent of girls indicated high levels of distress compared to 23 per cent of boys.

Levels of distress also increase significantly in the later teens, to an average of over 40 per cent of students in grades 11 and 12. One in five students (21 per cent) reported visiting a mental health professional at least once during the last year, a marked increase from 12 per cent in 1999.

“While we can’t say for certain what is causing this distress, it’s important for parents, schools and health care providers to be aware of what young people are telling us about their mental health,” said Dr. Mann. “Our research indicates that the later teen years into the twenties is the peak period of stress for many people.”

Screen time, social media use, and problem gaming on the rise

Survey results also showed that in 2015, almost two thirds (63 per cent) of students spent three hours or more per day of their free time in front of a TV or tablet/computer. The percentage of students who are screen-time sedentary has increased from 57 per cent since 2009, the first year of monitoring this behaviour.

At the same time, while the majority of students rate their health as excellent or very good (66 per cent), only 22 per cent of students met the recommended daily physical activity guideline, defined as a total of at least 60 minutes of moderate to vigorous activity per day, during the past seven days.

“We know that the more time spent on social media sites, the greater the risk of cyberbullying and related mental health issues,” said Dr. Hayley Hamilton, scientist with CAMH’s Institute for Mental Health Policy Research and co-lead investigator on the OSDUHS. “Combined with low levels of physical activity across this age group, we are seeing clear priority areas where we can work with youth to improve health.”

“The reality is that it’s not possible to be technology-abstinent in 2016,” said Lisa Pont, social worker with CAMH’s Problem Gambling Institute of Ontario, who helps youth and parents better manage technology use. “But it is possible to have good ‘cyber health’, to balance screen time with other activities and to prevent technology from having serious negative consequences on the rest of your life.”

Noticing an increase in young people struggling with gaming and other forms of tech use, Pont helped develop CAMH’s clinical programming on technology misuse and also trains other health professionals in this emerging area.

“At CAMH we see young people who are on the more severe end of problem tech use, many of whom have pre-existing depression and anxiety,” said Pont. “Many youth are heavy users of technology and are able to keep good balance in their lives. But for those who develop problems, it is important that the underlying and concurrent issues are addressed so that healthier tech use is achievable.”